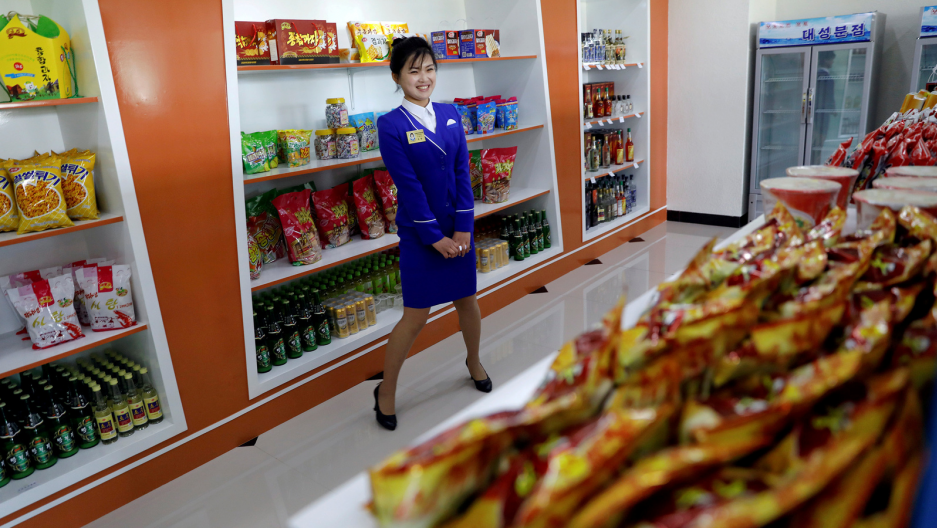 A vendor is pictured in a shop in a newly constructed residential complex after its opening ceremony in Ryomyong street in Pyongyang, North Korea.

When Ian Collins arrived in North Korea in November 2017, he wasn’t sure what to expect. Tensions at the time were high: Pyongyang had just conducted its sixth-ever nuclear test in September, while missile launches and heated rhetoric were flying all over the region.

Even more daunting — Collins, a 39-year-old Australian based in Singapore, was going to the secretive state built on a Stalinist economy to teach North Koreans about business skills and entrepreneurship.

“I like a bit of adventure,” he said, laughing.

Collins was volunteering with a Singaporean nonprofit called Choson Exchange, which has been running business training workshops in North Korea since 2009.

What he found was a country and a people very different from the images generally seen in popular media.

“Before I went, North Koreans seemed like sort of robotic adherents to the regime,” said Collins, who works as an industrial safety and management consultant.

“And walking into the classroom for the first time was a little bit intimidating. The rooms are dark a lot of the time from a lack of electricity, and they’re all wearing similar outfits with their pins of the leader.”

But Collins said that after initial jitters and some ice-breaker exercises, the mood changed dramatically. “I found them to be one of the most receptive audiences I've ever spoken to,” he said. “Just because there's that hunger for information.”

And after classes, he had the chance to socialize with some of the local North Korean partners involved in hosting the workshop, which was held at the Pyongsong University of Science. “We sang karaoke, talked about our families — I got to see the human face of the country.”

Choson Exchange, which was founded by Singaporean entrepreneur Geoffrey See, has taught more than 2,000 North Koreans directly and has brought about 100 North Koreans to Singapore for training.

Calvin Chua, 33, a programs coordinator for Choson Exchange, said that the basic concepts of doing business are not unfamiliar to most North Koreans. An informal culture of entrepreneurship has emerged in North Korea since the 1990s, when a famine struck the country and many people needed to trade in black markets to survive.

Still, many North Koreans have not yet been exposed to many basic market concepts, said Chua.

“For example, how do you know what’s a good price to charge?” he said. “Or not understanding concepts that we're very familiar with, such as branding.”

On the final day of the four-day workshop that Collins helped to lead, the 80 students broke up into small groups to give quick, Shark Tank-like pitches for products that reflected their practical concerns.

Their ideas included a solar-powered heater that would absorb energy all summer and store heat to use over the winter, a type of surge protector to deal with constant electricity shortages and a nutrition-packed health drink.

One idea that stood out to Collins was a training tool for taekwondo, the Korean martial art. Instead of the pine boards that students break with kicks, the team came up with a plastic board that could be broken and then snapped back into shape.

“They claimed you could use it a hundred times, Collins said. “The environmental impact would be huge. If true, it’s got massive international potential.”

Related: For some in Singapore, Trump-Kim summit isn't a big deal

Another group pitched a scheduling app for the locally produced smartphones that are increasingly being adopted. Surprisingly, there’s even an app store for North Koreans — but it’s an actual, physical shop where customers bring their phones to have apps installed.

Chua, who works as an architect and urban strategist, said that Pyongyang has evolved dramatically as a city over the 10 years since his first visit there.

Kim Jong-un, who took over as leader of North Korea in 2011 after his father, Kim Jong-il died, not only ramped up development of nuclear weapons and missiles, but also made economic and urban development a priority.

“If nuclear weapons is his foreign policy, then architecture and urban development is his domestic policy,” said Chua.

Another Singaporean who has seen the changes in North Korea is Patrick Soh, who brought the first fast-food franchise to North Korea in 2009: a burger restaurant called Samtaesong (Three Stars).

“In the beginning, it was hard to even find pens and paper, batteries,” said Soh. “But now, you are seeing cars, smartphones, tablets. They’ve built a modern new airport, there are new high-rise buildings everywhere.”

Of course, strict sanctions imposed by the UN last year are having an impact on economic development and restricting the kind of international investment that would propel growth.

North Korea’s abysmal human rights records and its nuclear arsenal have kept it ostracized from much of the world, but a whirlwind spate of international diplomacy, highlighted by a summit meeting between President Trump and Kim Jong-un in Singapore on June 12, has created a sense of optimism for many. Chua said that Choson Exchange is hoping to be able to launch a business incubation center in North Korea that could one day connect local entrepreneurs with outside investors.

Choson Exchange has already had some success stories from their workshops. One group of former students opened a modern café serving cappuccino and espresso in a cheery, well-designed space. They even adopted one of the concepts they heard about in the workshop: customer loyalty cards.

“They applied it, even though they may not really need a loyalty card,” said Chua. “Technically, they don't have a lot of competitors.”

In the meantime, Collins is preparing to join Choson Exchange’s next workshop in North Korea in August. He said he’s looking forward to enjoying another side of North Korea that defied expectations: the beer, which comes in nine varieties made by state-run manufacturer Taedonggang, running the gamut from lager to stout.

“That was a very pleasant surprise,” said Collins. “It was great — some of the best beer I've ever had.”

A previous version of this story misstated Ian Collins' age.