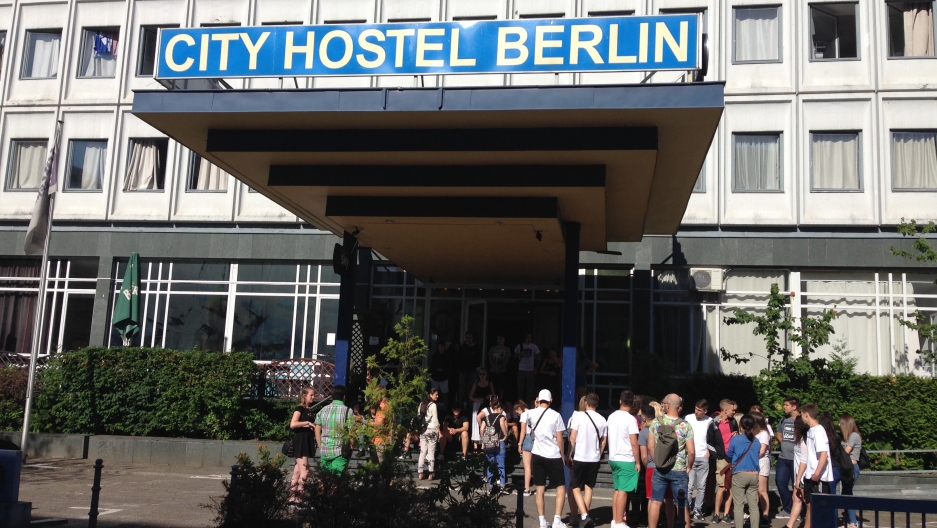 A North Korean flag is flying discreetly between City Hostel Berlin and the socialist dictatorship's embassy next door. North Korea owns both buildings, and City Hostel Berlin, leased to a German hotelier for 38,000 euros a month is one way this unusual landlord brings in hard currency to support the regime.

Step into the City Hostel Berlin and you'd be forgiven for not noticing anything strange at all. The budget backpacker hotel near the Brandenburg Gate in former East Berlin has a spacious lobby, a big-screen TV, a pool table and room for hundreds of guests in its no-frills shared bunkbed rooms. Multilingual receptionists hand out rental towels and bartenders take orders for 12 kinds of beer at the hostel's busy bar.

But a few steps away from the building, a North Korean flag flies discreetly between the hostel and the Socialist dictatorship's bleak embassy building next door. North Korea owns both buildings, and City Hostel Berlin — leased to a German hotelier for 38,000 euros ($44,800) per month — is one way this unusual landlord brings in hard currency to support the regime. It's still operating despite United Nations sanctions that cut off much of North Korea's business dealings and a UN resolution prohibiting North Korea from using diplomatic properties as sources of revenue.

The gate of the North Korean embassy in Berlin, Germany.

During the Cold War, when Germany and Berlin were each divided, North Korea had friendly diplomatic relations with its Socialist brothers-in-arms in East Germany, and claimed a large embassy compound in a prime location near the Berlin Wall and next to the embassy of Czechoslovakia. Today, the Czech Republic has moved on, but North Korea has not.

Behind a high metal fence, its main embassy building is neglected and ragged, with torn window screens and a decrepit basketball hoop in a concrete courtyard in back. At the entrance to the embassy building, a glass showcase displays propaganda pictures of North Korean attractions, including photos of Kim Jong-un visiting productive fields and factories, and a Western-style water park where happy-looking children squirt water guns. It looks fun, but North Korea is hurting for cash. That's where the City Hostel comes in.

Unlike other countries, Pyongyang doesn't fund its foreign embassies — instead, they're expected to pay their own way, as well as send money back home, says Eric Ballbach, a North Korea expert with the Institute for Korean Studies of the Freie Universität Berlin and the German Institute for International and Security Affairs.

“The City Hostel is a symptom of a much bigger problem, [which] has to do with North Korea's way of generating money,” he said. “There are countless streams of illicit, sometimes legal, sometimes semi-legal ways for the North Korean government to make money, and the North Korean embassies are a central part in this regard.”

“In the case of the embassy in India, at one point they were running an abattoir in the basement. So if you wanted to get cheap beef in New Delhi, you went to the back door of the North Korean embassy,” said Marcus Noland, executive director at the Peterson Institute for International Economics in Washington.

Noland, who has studied the North Korean economy for 25 years, says North Korea uses diplomacy for profit in two ways: small-scale embassy-based “scams” like smuggling, and by using diplomats' immunity from prosecution to traffic in illegal drugs, currency, ivory and arms.

“Those are simply illegal activities,” he said. “And there is a long history of the North Koreans doing this all over the world.”

Compared to the international drug trade, leasing space to a youth hostel may not seem like such a big deal. Half a million dollars in yearly rental income, and even the millions the embassy owes Germany in taxes on it, are probably small change in comparison.

But every euro North Korea earns abroad goes to fund the regime back home. That's why the UN Security Council added sanctions in 2016 requiring member-states such as Germany to crack down on North Korea's embassy entrepreneurs. Germany reportedly ordered City Hostel to close by February 2017, and since then, North Korea has also reportedly canceled the hostel's lease.

A casual survey of hostel guests on a recent weekday suggests many don't know they're staying on North Korean property.

“If I had known, I wouldn't have stayed here,” said Emilie, 16, a German student on a school trip.

“We're not going to get kicked out of here, are we?” asked one American backpacker who preferred not to give his name.

In fact, the German leaseholders of City Hostel Berlin are fighting to keep it open. In a written statement from last year, they argued they should have the right to operate their business because it was approved by German authorities years before the sanctions came into effect. They said they do not support North Korea's weapons program, and that they have been mistreated by the news media.

They also said they have stopped paying the rent.