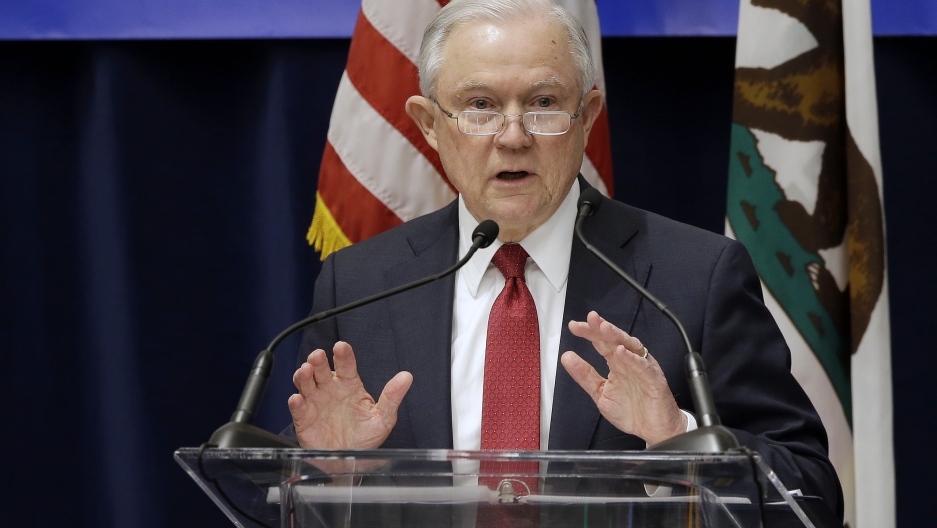 California is often called a “sanctuary” state, a place that is attempting to defy the Trump administration’s get-tough approach on immigration and protecting undocumented people in the state. But Jesús Ruiz sees things differently.

“There is a lot of chaos, a lot of confusion,” he said this week, following a recent burst of federal immigration operation throughout California.

Ruiz helps run a rapid response network in Santa Clara County that includes a hotline for people seeking legal advice if Immigration and Customs Enforcement (ICE) officers come to their door. The network also tries to verify if ICE officers are in a neighborhood, and can dispatch volunteers to witness arrests and support family members or children who might be left alone in the aftermath. Similar networks now exist in other parts of California and the US.

A network in New Mexico: How to shut down an immigration raid — even if it means getting arrested

At the beginning of 2018, the Santa Clara network took a few dozen calls a week. That amount jumped to more than 400 calls during a four-day ICE operation in Northern California in late February. The enforcement effort resulted in 232 arrests. Of those arrested, 207 are from Mexican origin; others are from Guatemala, Honduras, India and Iraq, among other countries.

“We got a call from a woman last week. Her voice was so shaky," Ruiz said. "She heard there was an ICE van on her street. And we knew it was a rumor. We had someone go there to monitor and nobody was there. But she was wondering if she should have her daughter walk home from school alone, and she was really starting to panic, having trouble breathing. I had to talk her down.”

On Wednesday, March 7, US Attorney General Jeff Sessions appeared in Sacramento before the California Peace Officers’ Association and slammed California for promoting a “radical open-borders agenda” that hinders President Donald Trump’s immigration agenda. His remarks followed a legal punch: A Department of Justice lawsuit against California for a trio of so-called “sanctuary” laws passed last year.

One law, Senate Bill 54, restricts local law enforcement from cooperating with ICE officers and, among other provisions, prevents them from alerting ICE about when they release jailed immigrants, so long as they have not committed certain crimes. A second law prohibits employers from allowing ICE to access employee records or enter a worksite without a subpoena or a judicial warrant. The third law allows the state to monitor conditions at federal immigrant detention centers.

Sessions said California’s laws smack of secession. To win, the Justice Department will lean on a 2012 Supreme Court decision — but turns the table on that ruling. That ruling favored the Obama administration when it sued Arizona over a state law that the federal government said overstepped boundaries to target undocumented immigrants.

California’s Attorney General Xavier Becerra, named as a defendant along with Gov. Jerry Brown in the new lawsuit, called the Trump administration’s legal move part of a “B-rated movie.” “We are not doing their bidding on immigration enforcement and deportation,” he said.

The district court in Sacramento will now review the case, which may move to the US Court of Appeals for the Ninth Circuit and then the Supreme Court.

But as the battle continues, immigrant communities in California are already feeling the fallout as ICE increases arrests and worksite audits. Ruiz is concerned that the lawsuit will add to confusion over whether or how local police may cooperate with ICE, and will keep some people from reporting crimes.

At the same time, and while Ruiz is fiercely critical of the Trump administration’s approach toward immigration, he is encouraged to see broader community engagement to support immigrants and their families. “I see allies, who have been on the sidelines during the Obama administration, saying, ‘Oh, wow, this is happening.’ And they are calling us up and saying, ‘Hey, can you do a rapid-response training at our church?'” he said.

In other parts of the state, including in more rural areas, concerns are also high that employees and employers will be increasingly squeezed as California fights Trump. Increased ICE workplace audits are part of the crackdown, with a spike in inspections since the start of the year. The audits typically give employers three days to produce employee records, I-9 forms, for verification. One of the newer California laws, cited in the government’s complaint, also requires employers to post notice of the audit where workers can see.

“What happens though is that those notices go up and strike fear among workers, and they may not return to their jobs,” said Manuel Cunha, president of the Nisei Farmers League, an agriculture advocacy group in Fresno. “The worker may even have the right paperwork, too, might be legal, but they may be afraid that ICE will start asking questions and find out about members of their family who are undocumented.”

Also: How Japanese and Mexican American farm workers formed an alliance that made history

Workplace inspections are not new, however. The Obama administration relied on them heavily for years, before dramatically decreasing audits after 2013 as the president faced pushback from immigrant rights groups.

Patrick Vincent Ricchiuti, who runs P-R Farms in Clovis, California, faced a workplace audit in 2009 and said it forced him to lay off nearly a one-third of his workforce, about 50 people, whose documentation did not pass federal inspection.

This also convinced him to move away from producing labor-intensive stone fruits to growing olives and almonds, which can rely more on mechanized harvesting.

“We had to get out of the stone fruit business completely. We shut down our packinghouse, pulled up the fresh fruit trees,” he said. “I had to let people go who were with us for 20 years. It was really painful. Good people, like family.”

Without significant immigration legislation, Ricchiuti said that more farm owners will go his route, and turn to crops that require fewer hands, and do not rely on a shifting and increasingly scrutinized labor force. But many farmers will not be able to manage the change.

“People will not even come to fathom how this state and the other states would be shut down, when the crops rot in the fields, would not get harvested, would not get planted,” Ricchiuti said. “They haven’t found a machine yet to pick a strawberry.”

When Ricchiuti needs manual labor to help with the almond harvest, he does not hire directly.

“I have to verify every worker. That’s part of the agreement I made after the audit,” he said. “The truth is that once people hear that we are verifying workers, they won’t even come and apply. No way.”

Instead, Ricchiuti distances his company from workers who may not be authorized to work in the US. After the immigration audit, he agreed to join E-Verify, an online federal tool to check a job applicant’s identity and employment eligibility. When he needs seasonal workers, he hires through farm labor contractors, rather than employing people directly.

“We just hire the contractor,” he said. “It’s not our responsibility to verify. We don’t know what the labor contractors’ obligations are, how they do their checking. However, we ask them to provide us with additional help when we need it. It’s all on them.”

Ricchiuti, a longtime conservative who voted for Trump, hopes that the battle between the federal government and states like California may eventually force a long-term and more comprehensive immigration fix.

“I think Trump is right to get tough on the border and to try and limit more migration to the US,” he said. “I also see how painful his policies are in many communities, and we feel the impact here. But I also think that California’s politicians are not helping by intensifying the battle. It is just making the government come down harder here.”