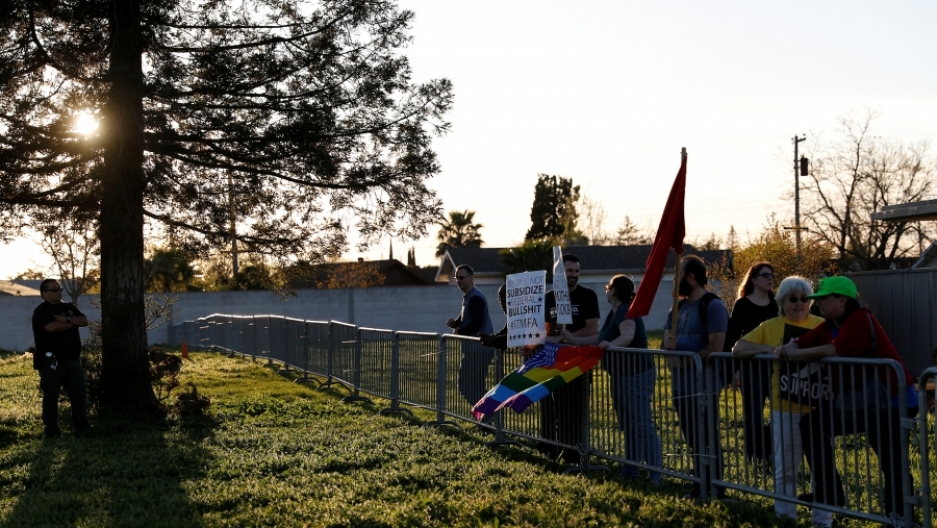 People protest outside before the start of a town hall meeting being held by Thomas Homan, acting director of US Immigration and Customs Enforcement and Sacramento County Sheriff Scott Jones, in Sacramento, California, on March 28, 2017.

The law, SB 54 or the California Values Act, aims to severely limit cooperation between Immigration and Customs Enforcement (ICE) and local law enforcement agencies. But fierce opposition from police and sheriff groups led lawmakers to negotiate. The result of those talks is a law that limits collaboration between federal immigration agents and local jurisdictions, but also maintains some of those connections.

“Because of the amendments to the bill, it's not foolproof,” says Angela Chan, policy director with Asian Americans Advancing Justice – Asian Law Caucus in San Francisco. “You have protections, it will make an impact, but it probably isn't enough.”

ICE will still have access to county jails, but there will be limits on the information local agencies can share. Unless an immigrant has committed certain crimes or there is a warrant, police officers and sheriffs in California will no longer be able to tell immigration agents when people they detain are released from custody. They will no longer be allowed to transfer people to ICE solely because the agency asked them to do so.

Gov. Jerry Brown signed SB 54 into law on Oct. 5. In California, almost 30 percent of the population is foreign-born.

Supporters say the sanctuary law still provides a baseline of standards across the state. 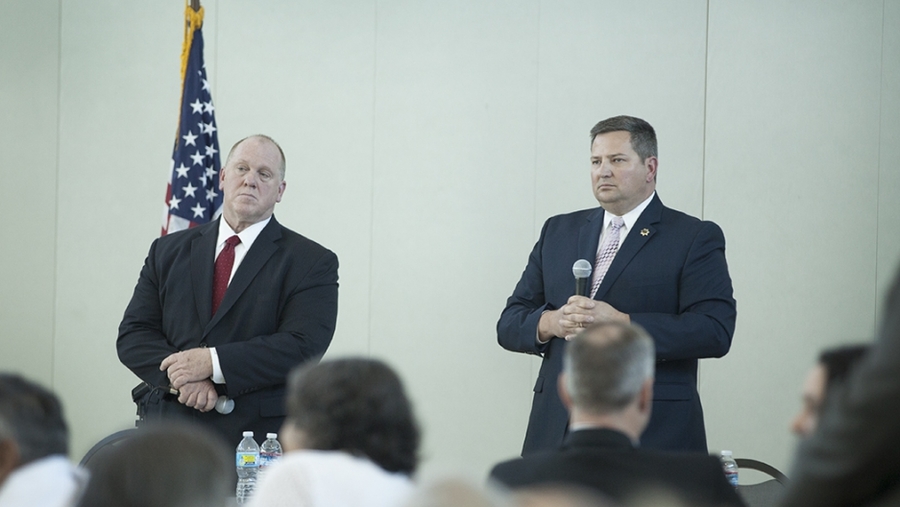 When Thomas Homan, left, acting director of Immigration and Customs Enforcement, participated in a town hall in Sacramento on March 28, 2017, things got loud. Sacramento County Sheriff Scott Jones, on the right, says he was satisfied with the event, though.

That’s been the case with Sacramento County, which has a contract with ICE to house detained immigrants. Critics of SB 54, including the Sacramento County’s Sheriff Scott Jones, say the law takes away local law enforcement’s ability to ensure dangerous criminals remain in custody.

“There is no substitute for us, as sheriffs, being able to have direct collaboration with ICE inside of our jails and if we can't, then dangerous people will most certainly slip through the cracks and get out of jail,” says Jones.

Even before SB 54 takes effect on Jan. 1, 2018, there are already limits on how local law enforcement agencies can handle ICE holds or detainers, which are written requests from ICE to hold an individual in jail for an additional 48 hours after his or her release date. California counties already do not honor these requests because of a federal ruling that the requests violated the Fourth Amendment, which guarantees due process under the law. While some local law enforcement officials wanted the Department of Justice to fight that ruling, the Obama administration refused to do so.

Chan says that during the negotiations for SB 54, immigrant rights group were adamant that the new sanctuary law uphold that practice. They also pushed to cut off ICE’s access to jails, which the law ultimately did not do.

Still, other parts of the sanctuary law explicitly prohibit some federal immigration enforcement activities. Previously, there were no limits on police officers or sheriffs providing release or transfer dates and times for an individual whom ICE wants to detain. The practice gave ICE a way to arrest an immigrant without officially taking custody from local law enforcement, says Chan. But with SB 54, officers are not allowed to notify ICE unless the immigrant being released has been convicted of specific crimes in the past or has been charged with serious or violent crimes.

The sanctuary law also prohibits local law enforcement from taking part in the 287(g) program, which deputizes local officers to enforce immigration laws. Most counties in California already don’t participate in that program, and the Obama administration scaled it back. The Trump administration issued guidelines in February calling the program “a highly successful force multiplier” and vowed to expand it “to the greatest extent practicable.”

Immigrant rights groups see practices such as holds, transfers and the 287(g) program as tools that federal immigration officials want to use to extend its reach to local jurisdictions.

“The theory, as we understand, and believe is true, is that if ICE can get local law enforcement or police officers to engage in immigration enforcement, then they can deport a lot of people,”  says Chan.

“They can't have a permanent workspace in your facility. They can't be given access to information other than what we released publicly,” says Jones.

For this reason, sheriffs in California continue to oppose the bill despite the concessions.

“It’s a big mistake because it puts into conflict the relationship between the federal government and state law enforcement and really, truly hampers the ability for local law enforcement to communicate with our federal allies,” says John McGinness, deputy director of the California Peace Officers Association and former Sacramento County sheriff.

The state’s police chiefs association has said it is neutral on the law.

Aside from the day-to-day effects of the new law, there are philosophical questions about the sanctuary law and both sides are anticipating a fight with the Trump administration.

“It’s an extremely bad policy when you legally dictate that one law enforcement agency can't talk to another,” says Jones.

Immigrant rights groups say their focus will be to push for even more measures at the local level.

“It's an opportunity for local communities to ask their local law enforcement agencies and their board of supervisors to adopt and consider adopting stronger policies,” says Chan.