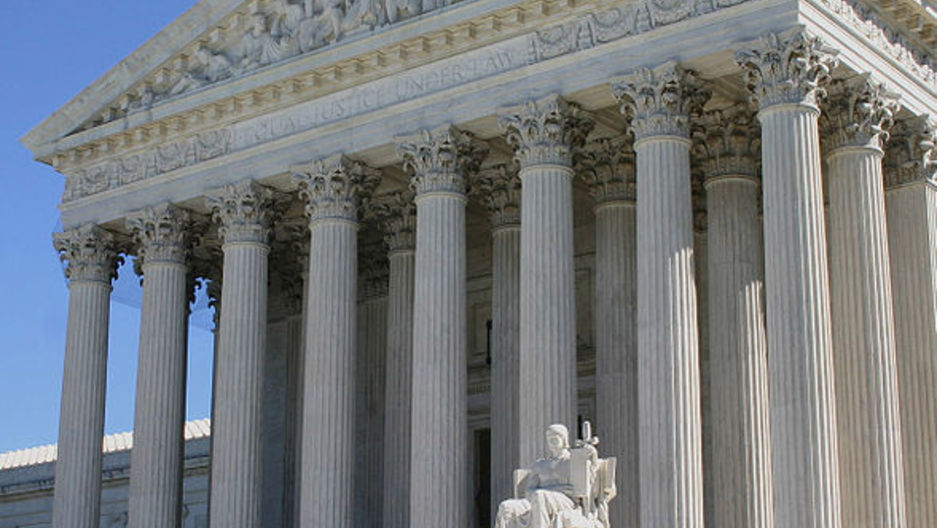 The U.S. Supreme Court struck down large parts of the Arizona immigration law Monday while unanimously supporting the law's centerpiece — a provision that requires police to check the immigration status of people they suspect are illegal immigrants.

In a 5-3 decision, the Supreme Court justices ruled against three of the four provisions in the law, known as SB-1070. Justice Anthony Kennedy wrote in the majority opinion that those provisions interfered with — and were ultimately trumped by — federal immigration law.

"The national government has significant power to regulate immigration," Kennedy wrote. "With power comes responsibility, and the sound exercise of national power over immigration depends on the nation's meeting its responsibility to base its laws on a political will informed by searching, thoughtful, rational civic discourse."

Though "Arizona may have understandable frustrations with the problems caused by illegal immigration while that process continues," he wrote, "the state may not pursue policies that undermine federal law."

One of the law's provisions struck down by the Supreme Court allowed police to arrest suspected illegal immigrants without warrants. The other two made it a crime for illegal immigrants to look for jobs without work papers and to not carry proper immigration documents.

Arizona State Rep. John Kavanagh, who helped write the law, expressed relief over the Supreme Court's decision to uphold the so-called "show me your papers" provision. It requires police to check the immigration status of anyone they stop or arrest when they have reason to suspect that the individual is an illegal immigrant.

Kavanagh called it the "heart and soul" of the law.

"That was really what SB-1070 was all about," Kavanagh said. "The other provisions were secondary."

While Republicans like Kavanagh were quick to praise the Supreme Court's decision, it was at least a partial victory for President Barack Obama.

"The state cops are really just enforcing the federal law as opposed to the state making up its own rules," she said.

In a statement released Monday, Obama praised most of the ruling while voicing his concern for the controversial provision it left intact.

He said Arizona law enforcement officials must not enforce the law in a manner that undermines civil liberties.

Justice Kennedy agreed. He warned Arizona and other states about the possible consequences should they excessively enforce the law.

"This opinion does not foreclose other preemption and constitutional challenges to the law as interpreted and applied after it goes into effect, Kennedy wrote in the majority opinion.

Critics say the "show me your papers" provision could lead to racial profiling. By ruling inconclusively, Bazelon said, the Supreme Court gave Arizona police the "benefit of the doubt" as they started to implement the new law.

"A patchwork of state laws is not a solution to our broken immigration system," the president said in his statement. "It's part of the problem."