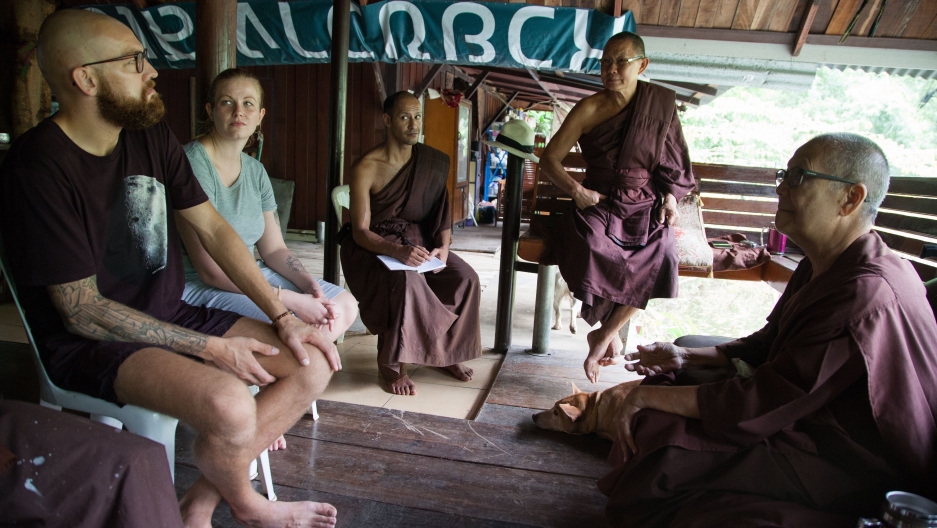 When the morning mist clears from Thamkrabok Monastery, it reveals granite cliffs looming over a sprawling complex of temples and mammoth Buddha statues. Sometimes around noon, you can find a group of foreigners sitting on a wooden porch overlooking a pond, talking with monks (some of them also foreign) about destiny, self-reliance and karma.

One could mistake this place for a spiritual retreat, but in fact, hardly anyone comes here as a tourist. Most of the people who visit Thamkrabok are struggling with addiction and seeking treatment at the monastery’s famous detox clinic.

Hidden behind a nondescript stretch of highway about two hours north of Bangkok, the whole place is easy to miss if you don’t know what you’re looking for. But for Thai people trying to overcome addiction and even some Westerners, Thamkrabok is no secret. The monastery, which was established in 1957, has a reputation for its cold-turkey detox, served in the form of a vomit-inducing herbal tea that the monks have brewed from a secret recipe since 1959. 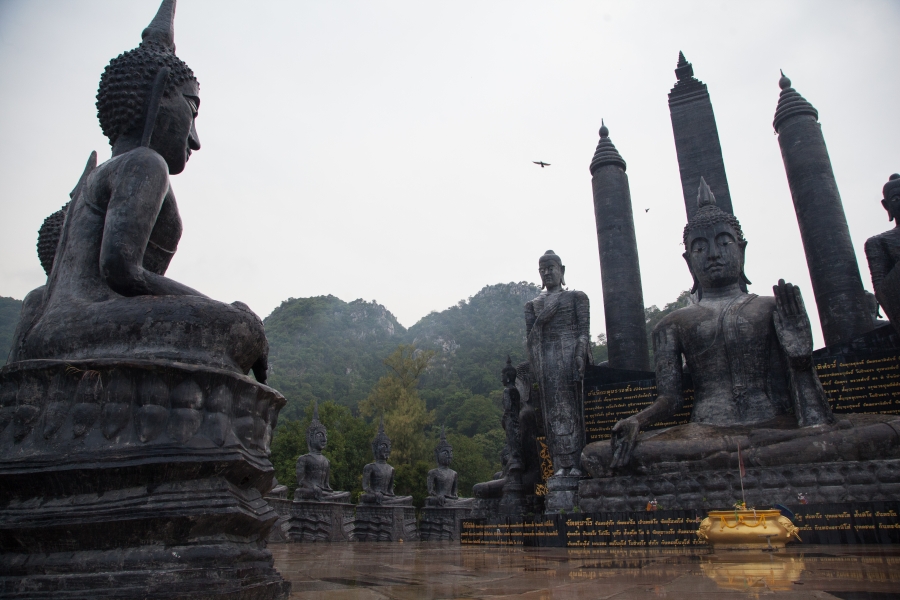 Buddhist principles of self-reliance and mental fortitude through meditation are the core of the detoxification program at Thamkrabok.

There are about two dozen patients — most of whom are Thai — at the detox center, a fenced-off area in the middle of the monastery grounds that includes a cantina and separate dormitories for men and women. The treatment is primarily for opioid, methamphetamine and alcohol addiction and is provided completely free of charge, but patients must agree to spend at least 14 days there (seven days for foreigners), drinking the tea every afternoon for five days and not leaving the grounds without permission and escort from the monks. There’s a handful of foreigners here, in late September, coming from far-flung countries like the Netherlands, Canada and Ireland. 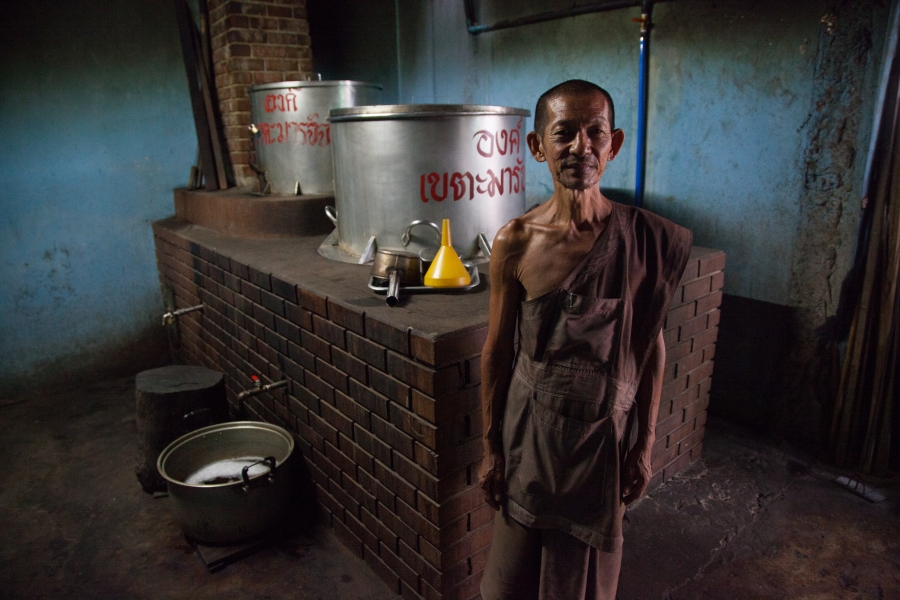 The herbal brewmaster at Thamkrabok poses for a portrait in the room where the detoxification tea is brewed.

Jeremy Nemeh, a 38-year-old artist and acupuncturist from Australia, became one of those patients in January 2016. His mom told him she had arranged a trip for the two of them to visit her family in Thailand and to tour temples — because she knew her son had a fondness for temple life and meditation. Instead, she brought him directly to Thamkrabok in a last-ditch effort to save her son’s life. Now, he is a monk who lives there, having decided to stay and devote himself to monastic life after his treatment was complete.

Speaking in a calm and deliberate voice, Nemeh explains how he became addicted to heroin. “I had an underlying, badly diagnosed medical condition that required a whole bunch of painkillers and … the painkillers that I could get legitimately were not effective.” The use of opioid pills led to morphine, which eventually led to heroin.

At least two other patients, both of them from Canada, had similar stories of getting addicted to opiates after being prescribed painkillers. Like Alexandra Sheichuk, a 22-year-old from Calgary, Alberta, whose mother also brought her to Thamkrabok after hearing about it through word-of-mouth.

Sheichuk says that she’s been struggling with substance abuse since the age of 12, but things ramped up when she was 14 and got prescribed Tylenol 3 — which contains codeine — for the back pain she experienced from doing ballet. The irony is that she was in rehabilitation at that time, to kick a cocaine addiction. “I was given Tylenol 3s for my back pain, which made no sense, right?” Sheichuk recalls. Eventually, she started using what she thought was OxyContin but turned out to be pills cut with fentanyl — an opiate that is even more potent than heroin.

Much of Thamkrabok’s appeal to Sheichuk is that they don’t prescribe any kinds of drugs, which she sees as the root of her problem in the first place. Instead, they couple the physical detox with teaching an emphasis on self-reliance and discipline, which they help patients cultivate through the taking of sacred vows called sacaat. The sacaat is like a promise you make to yourself — be it not showing anger for two hours a day or honoring your parents or refraining from drug use. The point is that as you fulfill the vows, the feeling of accomplishment and self-control grows, making you feel more empowered to control yourself. A book the monastery put out describes it as a “solemn declaration about a ‘truth’ that the person wants to realize.”

Related: In Thailand, kickboxing is becoming more popular with women. Chiang Mai is at the leading edge.

Speaking about the sacaat, the deputy abbot of the monastery, Vijit Akarajitto, evokes the image of a tree that grows as one continues to fulfill their vows, providing more shade and protection. He says it is a way to build mental strength, to give addicts the self-control and confidence to keep from using again. “No one else can help; you have to do it yourself,” he adds. But Akarajitto admits that he worries they may lose their way and relapse when they get home. He could not comment on the success rate, he says, because they do not follow up on patients and people are not admitted back for a second time. 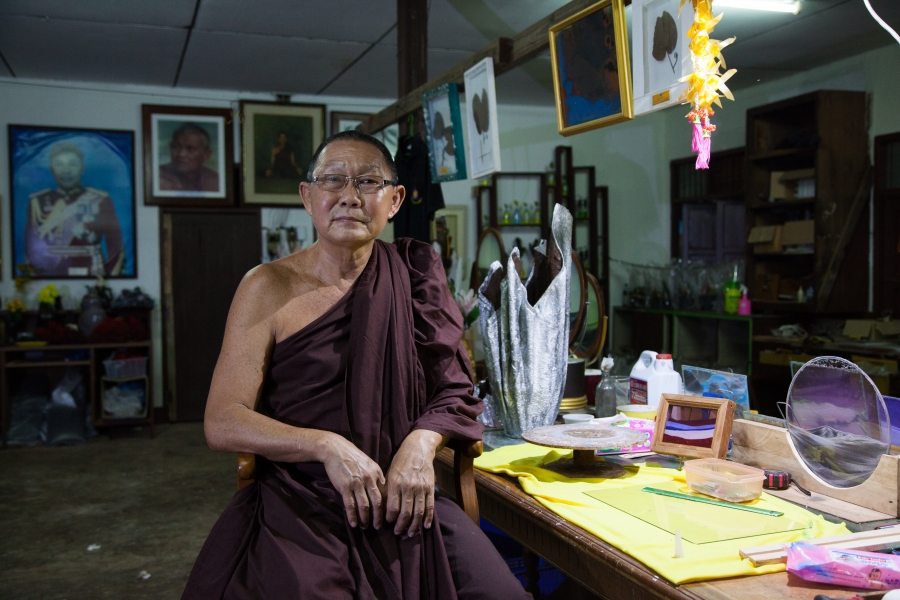 Deputy abbot Vijit Akarajitto poses for a portrait in his workshop at Thamkrabok.

Others have tried to get a sense of its success rate, though. A 2015 Vice article cites a study that followed 65 patients at Thamkrabok: 90 percent of them completed the program, and 60 percent were drug-free a year later. That compares to a 40- to 60-percent relapse rate among drug addicts, according to the National Institute on Drug Abuse.

Sheichuk says she cried the first time she made a sacaat. On her third day of detox, after saying it aloud and taking the detox tea, she came to a realization. “It all came out, and it just hit me. Like life hit me, like, ‘Oh my God, like what have I been doing for the last 10 years of my life.’ I spent my 22nd birthday in detox here,” she says.

Instead of medicating pain, Thamkrabok encourages patients to accept their suffering and work through it. One nun at Thamkrabok says they don’t want to be seen as rejecting or disparaging Western medicine, just trying another way for people who have not found success through other means.

“I have never been able to come to a detox or treatment center that would be like, ‘You don’t need medication; you need to feel what you feel inside,’ and that’s the whole freeing part it. At first, I didn’t get it, and a lot of Westerners probably don’t,” Sheichuk remarked. 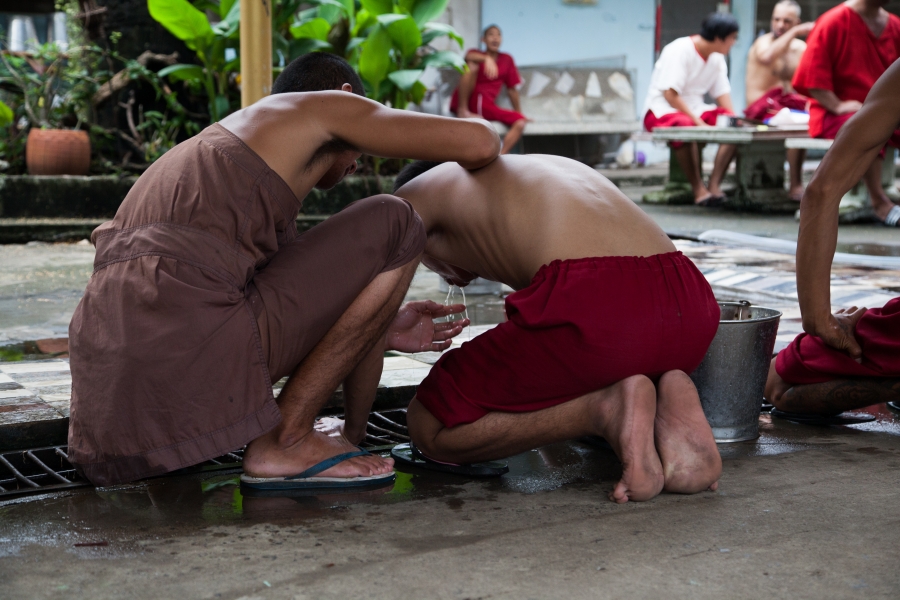 A monk helps a patient vomit shortly after ingesting the herbal detoxification tea.

Nemeh opted out of receiving treatment in Australia. “So, I interviewed because my parents wanted me to, but when I met with the people I really wasn't interested in admitting myself to that kind of care [in Australia], if you could call it that,” he says, adding, “Fundamentally, it’s just another chain of drugs; they want to substitute one drug for a different drug.”

In Thamkrabok, Nemeh says he never questioned that the treatment would work. “I knew I would be in this place for a period of time and that time would heal me.” And what made it more bearable, he says, was being able to spend that time in close quarters alongside other people who were going through the same thing and could understand the difficulty of it.”

Sheichuk echoes Nemeh’s sentiment, though, saying, “Every person who’s coming off drugs kind of feels like, ‘I can’t do it,” but having so much inspiration through the people here … the people that have been here, and have seen it, and have been through it, and are just like a guidance, an inspiration; it’s what you do with what they say.”

That’s something that she and other patients say they hope to carry with them long after they’ve left Thamkrabok Monastery.