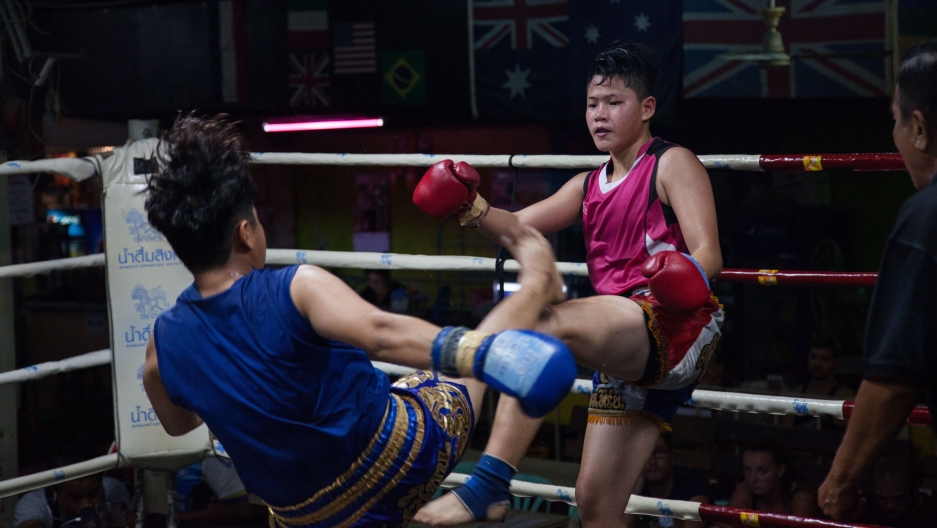 Phetlilaa fights her opponent at Thapae Stadium, in central Chiang Mai, where Kob Cassette is the promoter.

In northern Thailand, by the side of a backcountry road winding through rice paddies, there is the curious sight of a boxing ring and row of punching bags. A poster hanging above the ring features the fighters who train there — and almost all of them are girls.

Even if you managed to spot Pettonpung Gym from the road, you probably wouldn't guess that it’s produced some of the most renowned female fighters in Thailand and that it’s been an integral part of making the nearby city of Chiang Mai the epicenter of female kickboxing in Thailand. In fact, according to seasoned kickboxer Sylvie von Duuglas-Ittu, 34, it's “becoming the best female fight city in the country and very possibly in the entire world.”

Five years ago, Duuglas-Ittu moved from New Jersey — where she first started learning Muay Thai in the makeshift gym of her 70-year-old Thai trainer’s basement — to Thailand, to continue her training there. She spent about two years practicing at Lanna Gym in Chiang Mai and has since fought nearly 200 times in the country. Duuglas-Ittu also runs a blog called 8Limbs, where she has frequently written about Pettonpung and how special Chiang Mai is for female fighters.

One of those kickboxers goes by the name Phetlilaa, a 14-year-old girl who lives near Pettonpung, and is one of the most prominent female fighters in Chiang Mai. Earlier this year, Duuglas-Ittu, who has trained with Phetlilaa, wrote that she was “widely thought of as the next Thai female superstar.” 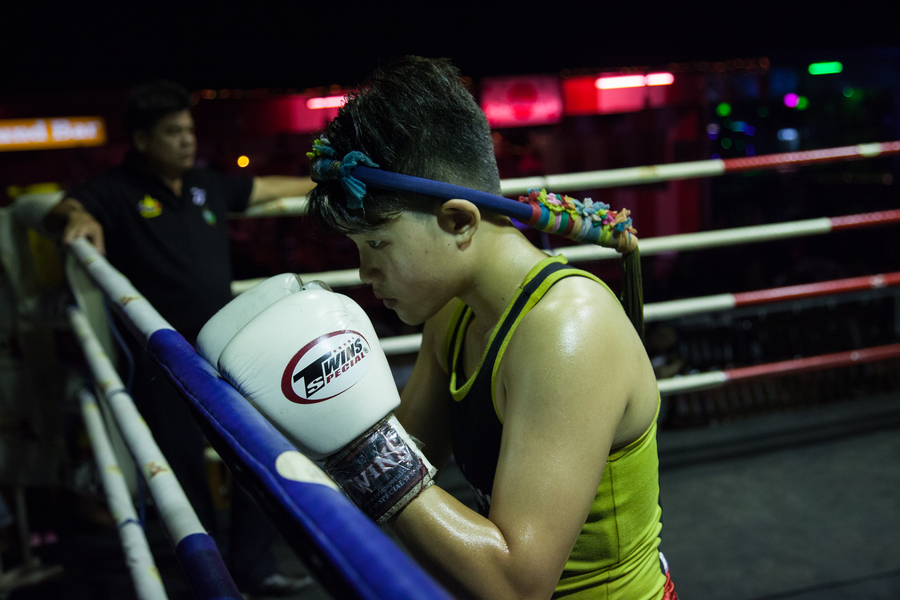 Phetlilaa and her opponent both performed a traditional dance, as is customary before a fight begins.

Phetlilaa's mom typically drops her off at the gym after school, often waiting and watching her train from a cluttered picnic table by the roadside. The gym has the feel of a community center as parents gather and chat while their kids kickbox. The head coach, a former army colonel who goes by the name Khun Yai, does not charge the local girls any fee to attend the gym. He takes a “lead from behind” approach, allowing seasoned fighters like Phetlilaa to show newer girls the ropes.

Related: This gym in Thailand is staffed exclusively by transgender men

And this is just one of at least three gyms in Chiang Mai that is predominantly for girls who go on to fight in any of the five permanent stadiums in the city.

Suraphan Gongsert, the main promoter for Loi Kroh Boxing Stadium, says that he books at least one female fight every night — sometimes two or three. “Chiang Mai is the best city in Thailand for female fighting,” he says, confidently.

But it was only 10 years ago that there were hardly any girls fighting in those stadiums, even if they were allowed to. Gongsert explains that girls used to box only in ceremonial fights in local temples, during festivals or holidays. And in Bangkok today, the official stadiums still do not allow women, citing their adherence to the tradition in which women were barred from nonceremonial fights.

In spite of this, Gongsert says kickboxing has become more popular with women across the country in recent years, and Chiang Mai is at the leading edge. It has a lot to do with the fact that the city’s stadiums have now started accepting female fighters. Kawila, a military stadium that burned down about six years ago, did not allow women to box until after it was rebuilt.

“Having so many stadia that allow women to fight there creates a great deal of opportunity and because of that opportunity, it’s also created a greater number of female fighters in the area who have that opportunity to keep fighting,” says Duuglas-Ittu.

On a humid afternoon, girls come to train at Pettonpung after school.

Until she retired in late 2017, Phetlilaa fought at least once a week, and she says she would've done so more if she could've found more local fighters in her weight class and skill level.

On a balmy Wednesday night in September, at Loi Kroh Boxing Stadium, a crowd of about 50 people — most of them foreigners — cheered wildly as she faced off against an opponent who traveled from the northeastern region of Isaan. “There are several fights almost every night for female boxing [in Chiang Mai], which is different from other cities like in Isaan, which only occasionally have fights,” says Phetlilaa.

Phetlilaa lies down and rests before the start of her fight at Thapae Boxing Stadium in central Chiang Mai.

Duuglas-Ittu says the fact that there is less gambling in Chiang Mai’s stadiums — which rely more on tourism dollars — has also fostered a better environment for female fighters because it means matches with lower stakes, which translates into more chances for girls to fight.

She explains that women in Chiang Mai have “more opportunities to fight because there isn’t a risk of losing 30,000 baht [about $1,000] on the fight and you’re going [to] get paid for it kind of as a job more, so I think that that creates more opportunity in Chiang Mai than you have in other areas where there’s greater risk on each fight.”

In fact, Gongsert says he has banned gambling at Loi Kroh Boxing Stadium in order to make the fights more legitimate and respectable.

He says that over the past decade or so, families have also begun to see kickboxing as a job that can provide regular income. For many, the lure of the paycheck that each fight brings — about 2,000 baht ($60) per fight, win or lose — outweighs whatever reservations they may have had previously about breaking from traditional values that frown on women boxing. 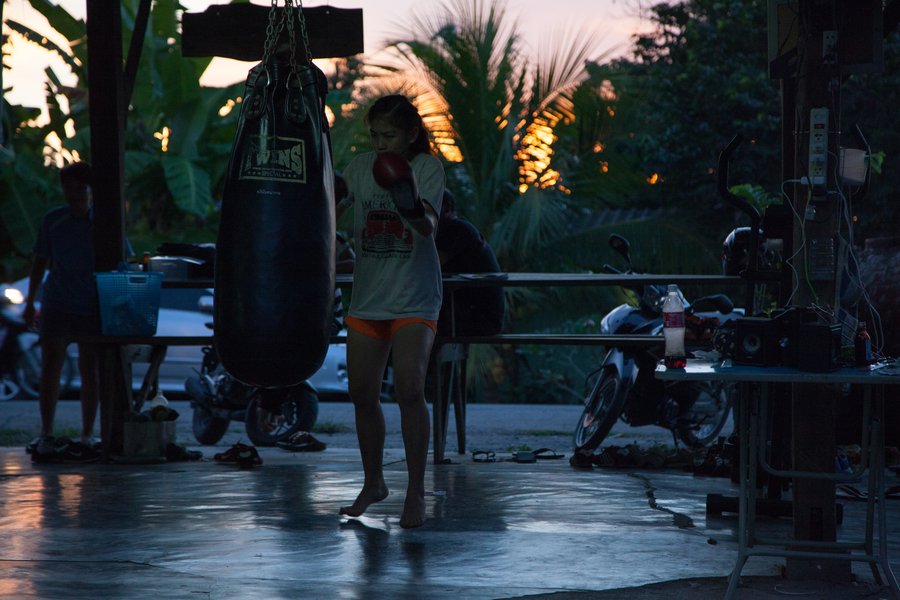 As the sun sets, a girl trains at Pettonpung, the gym in a rural village just outside Chiang Mai, a small city in the north of Thailand.

That’s what happened with Phetlilaa, who says she grew up without a father and felt that she needed to do whatever she could to help her family financially. At first, people would tell her that such a painful sport is not for girls, and she, herself, wasn’t sure if it was a good fit.

But once she saw her skill rapidly improve after a couple fights, and the money started coming in, she was hooked. “I didn’t first want to be a boxer. I didn’t even think about it. [My trainer] Lung Yai kept inviting me, so I gave it a try. After several trainings, I got to fight. Then I got some money. So, I chose to keep doing it to help support my mom,” she says.

One of the people who set the stage for fighters like Phetlilaa to thrive in Chiang Mai is Prasit Daengsuwan, better known by his nickname, Kob Cassette, the promoter for Thapae Stadium, who has taken a keen interest in making female fights a daily occurrence in his city. He also happens to be the president of the northern region for Muay Siam, a national Muay Thai association.

In his cramped office tucked in the corner behind Thapae Stadium’s ring, Kob Cassette recalls that it was about four years ago that Muay Siam began to officially categorize female fighters according to weight class, paving the way for official tournaments.

“I didn’t first want to be a boxer. I didn’t even think about it. [My trainer] Lung Yai kept inviting me, so I gave it a try. After several trainings, I got to fight. Then I got some money. So, I chose to keep doing it to help support my mom.” — Phetlilaa​, 14, kickboxer

The initiative started in Chiang Mai — under Kob Cassette's direction — after Muay Siam’s Bangkok office identified it as the region with the most female fighters. Kob Cassette estimates there are about 200 female fighters in the province. 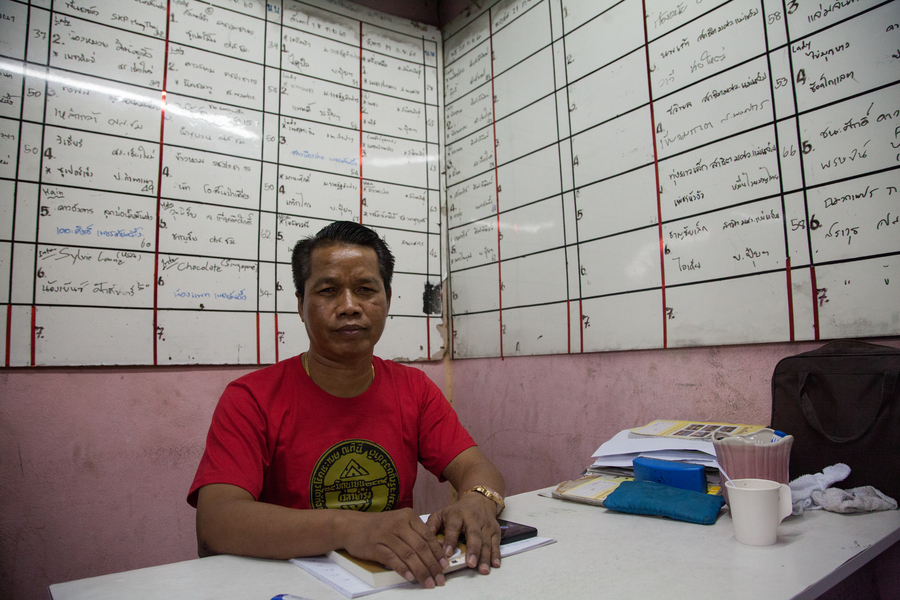 Kob Cassette poses for a portrait in his office in the back of Thapae Boxing Stadium. According to several sources, he was instrumental to the rise of female kickboxing in Chiang Mai.

The administrative change was probably the key step toward making Chiang Mai such a strong incubator for female fighters. “He definitely currently plays a big role so I would [imagine] he played an instrumental role in its development, as well,” says Duuglas-Ittu of Kob Cassette.

Ultimately, the fighters still have their eye on Bangkok or even fighting abroad in countries like China — where fights can bring as much as 15,000 baht (about $500) — once they are good enough to compete on that level.

Even still, Duuglas-Ittu finds herself traveling from Pattaya, the small city outside of Bangkok where she lives, hundreds of kilometers north to Chiang Mai, so she can train and catch up with the girls of Pettonpung. “It’s pretty amazing; I’ve not seen it anywhere else,” she says.

Watch a related video, below.