Jyb, the owner of Transfit, at his gym in Bangkok.

Jyb isn’t merely male. He’s an alpha male. Ragged claw marks are tattooed beneath his shredded pecs. It lends the impression that he wrestled with a jaguar and won.

Jyb’s abs, biceps and boy band-worthy smile certainly set him apart from most guys. But the 27-year-old Bangkok model and fitness instructor owes much of his social media stardom to the fact that he’s a transgender man.

And in Thailand, Jyb says, it’s never been a better time to be young, male and trans.

“In Thailand, acceptance for trans people has really shot up in the last five years,” says Jyb, whose full name is Phanyapad Maha-Udomporn. “Of course, you have old-fashioned thinkers who still say it’s wrong. But very few people from the young generation think this way.” 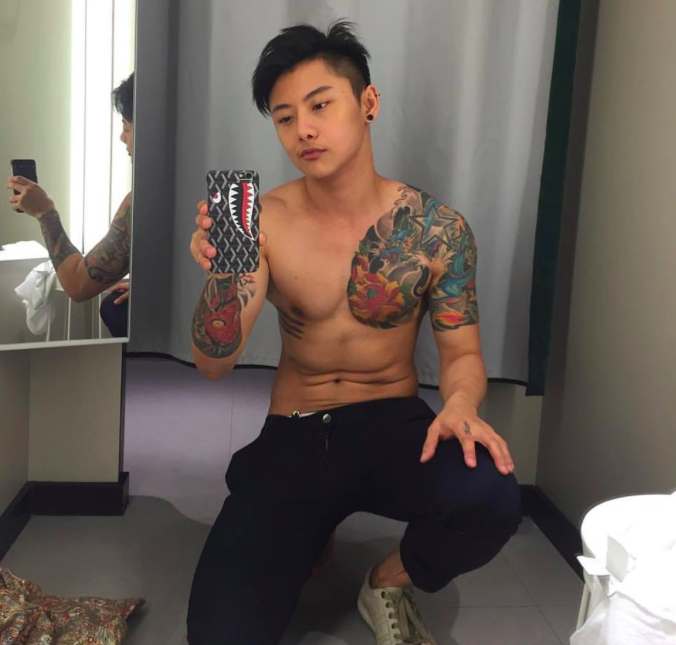 Jyb has a fan following on social media, where he shares selfies like this one.

Thailand, perhaps more than any other nation, is known for its vibrant and visible transgender population. But the spotlight is mostly fixed on trans women, often crudely labeled “ladyboys,” who delight tourists in cabaret shows.

Meanwhile, Thailand’s trans men, while invisible to much of the world, are enjoying more social prominence at home than ever.

Jyb is among a new wave of trans male heartthrobs. Between Facebook and Instagram, he boasts more than 40,000 followers — many of them smitten women decorating his comments section with googly eyed emojis.

Jyb is now translating his online buzz into profit. In 2015, he founded a gym exclusively for trans men and lesbians. Called Transfit — slogan: Not Only Men Gain Muscles — the workout facility is meant to draw in trans men who want to look like Jyb as well as women who want to train with him and his all-trans-male staff.

But Jyb is also appealing to another gender-based identity group that, in the West, might call themselves queer or non-binary. In Thailand they’re called “toms,” a word that borrows from the English word “tomboy.”

“A tom is a woman who dresses like a guy, cuts her hair like a guy and goes out with girls,” Jyb says. Many toms bind their breasts to appear flat-chested. Most prefer the pronoun, in Thai, that approximates “he” instead of “she.”

Some toms do identify as men, but many don’t.

Thais also have a word for women who date toms: “dee,” which borrows from the English word “lady.” (It’s pronounced “lay-DEE” in a Thai accent.) In most cases, Jyb says, a dee exudes mainstream Thai femininity: long, perfumed hair, lipstick, long lashes and so on — and they often exclusively seek out toms for romance.

In urban Thailand, tom-dee couples no longer draw smirks or stares. “You see them everywhere,” Jyb says. “They no longer have to hide in fear of society’s judgment.”

But many still abide by traditional gender norms.

“Toms can be sensitive. They’re like guys in that they can give off a bit of feminine sweetness. But toms have to take care of their girls,” Jyb says. “Just like guys.”

In recent years, an entire industry has sprung up to cater to toms and the women who adore them. A magazine, called @Tom Actz, showcases tom celebrities and tom-friendly fashion.

But Thailand is not transgender paradise.

Unlike in the US, same-sex marriage is not legally recognized. Trans women are too often resigned to low-end service jobs or the entertainment sector. Transgender women and men can also struggle to break into career paths, such as law or government, that demand conformity to idealized notions of old-school propriety.

But unlike the United States — where 11 states are suing the federal government over its insistence that transgender students use the public toilet of their choice — Thailand is hardly balking as its trans population grows more visible and assertive.

Even conservative Thais typically believe transgender people have a role in society — even if they think that role should be resigned to the margins. And practically no one, Jyb says, is vexed about where Thai trans people ought to use the toilet.

After all, transgender Thais have developed a certain public bathroom etiquette without the intervention of lawyers and politicians. When nature calls in a public place, Jyb says, trans men typically use the men’s room. Toms often prefer the women’s restroom — and, obviously, so do trans women.

“People choose whatever restroom fits with what’s in their heart and soul. There’s no big debate,” Jyb says. “Though, honestly? The women’s room is usually cleaner.”