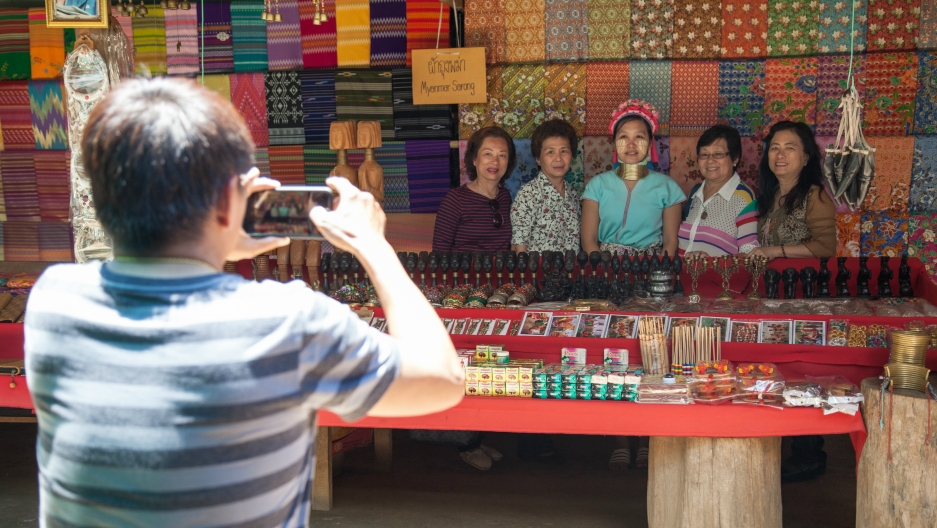 Thai tourists from Bangkok take a photo with one of the women at Huai Sua Tao.

Even if you’ve never heard of Huai Sua Tao village, you may know about some of its residents. Nestled in the mountains of northwest Thailand, this village is home to about a dozen “long neck women," known for wearing coiled brass rings to elongate their necks. In this remote province of Thailand, called Mae Hong Son, they are arguably the single biggest tourist attraction.

The women and their families are not citizens of Thailand, but refugees from Myanmar escaping poverty and conflict in their homeland, where they are members of a marginalized ethnic minority group: the Kayah. The neck rings are a tradition back home. In Thailand, they're a cultural curiosity that tourists will pay to see.

Tourists drive from as far as Bangkok, about 12 hours away, to stroll up and down the one dusty street in the village that has been built to showcase the Kayah’s way of life. The so-called Long Neck Village was constructed 27 years ago on a plot of land downhill from an actual Thai village, where some of the Kayah families move when they've saved enough money to construct a new house.

As visitors trickle into the village, the women quickly snap from watching pop songs on their smartphones to weaving traditional garments or strumming a ragged wooden guitar. But mostly they’re standing to attention behind the stalls that line the rocky path, hoping someone will buy the handicrafts and souvenirs on display.

The tourists, most of whom are Thai, saunter past and take pictures or selfies with them — some buy one of the dozens of products for sale at each stall. Thai visitors can enter for free but foreigners pay 250 baht (about $7.50) to get into the village, which apparently goes to paying the women’s 1,500 baht base monthly salary. One visitor on a recent afternoon had driven his five elderly sisters all the way from Bangkok to see the women. 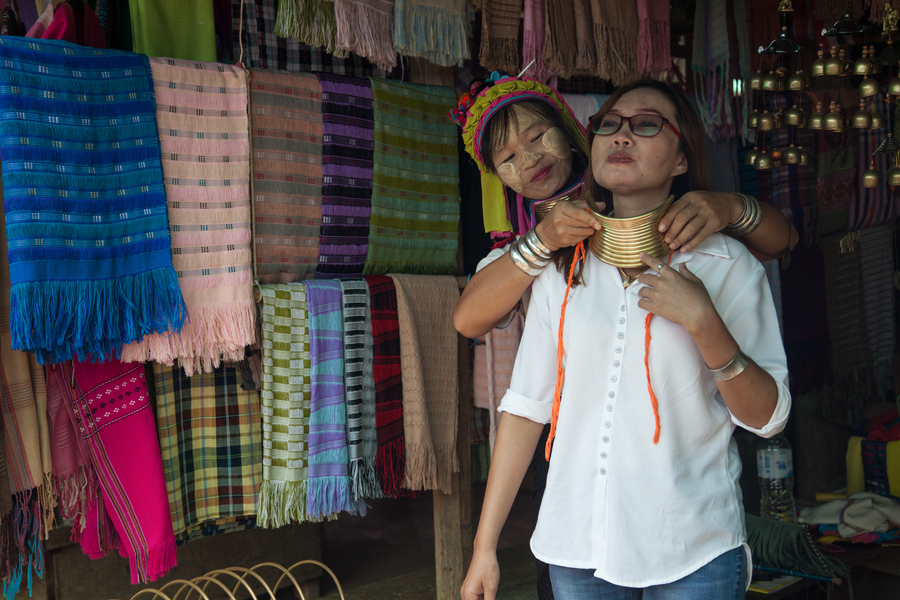 A Thai tourist tries on the brass rings that the Kayah women of Huai Sua Tao traditionally wear starting in childhood.

The whole spectacle has drawn criticism from outside observers who say it’s a human zoo exploiting migrants who have few other options to make a living.

“It's absolutely a human zoo," UNHCR spokeswoman Kitty McKinsey told the BBC in 2008, amid allegations that Thai authorities were specifically preventing Kayah women from resettling to third countries because of their value as tourist attractions. "One solution is for tourists to stop going," she added.

Ma Ja, one of the long neck women whose family came to Thailand when she was 11, hopes that people do not heed McKinsey’s call. For her, these tourists are not just the sole source of income, but a uniquely lucrative one that allows the women to earn — during peak tourist season — upward of 10 times what their husbands do.

“In the beginning, I did not understand why they have to let tourists come in and visit us,” Ma Ja says. “Later I understand the reasons, it’s because we have a different culture which people from the outside want to know about. On the plus side, by having tourists coming in, it creates jobs for us and we have income in our families from selling souvenirs to them. Selling souvenirs has become our source of income because we do not have any other recourse. If there are no tourists coming in, we would not know what to do.” 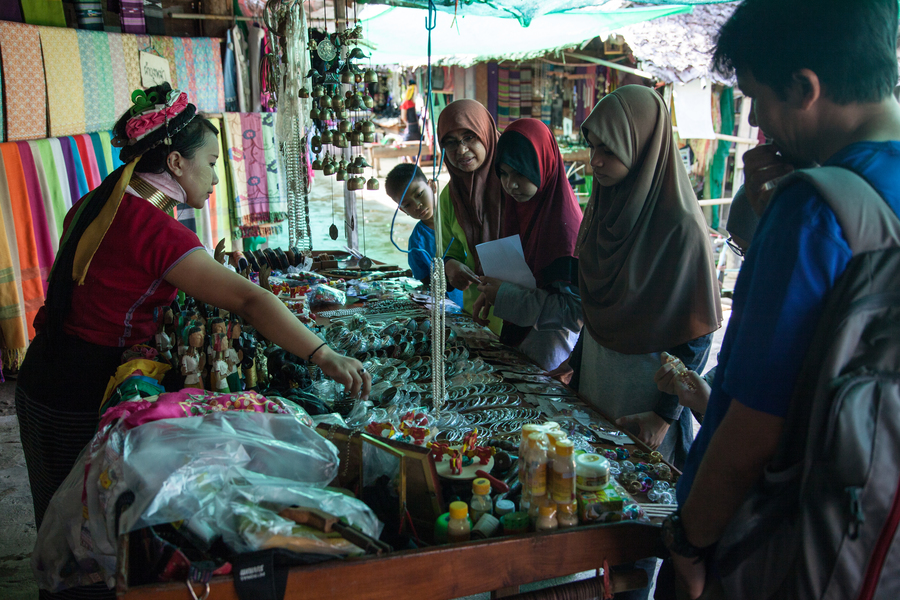 Tourists from Malaysia browse handicrafts at one of the many stalls lining the one main road through Huai Sua Tao.

One male resident of Huai Sua Tao, who refused to be identified for fear of retaliation if he ever returns to Myanmar, said that life in Thailand is much better than back home. He recalls how he and his family spent several days trekking through the jungle to reach Thailand, where at least “soldiers don’t bother us,” he says.

Ma Pang, a 34-year-old mother of two, says, “I didn't go to school … when I arrived I started selling souvenirs. I wore the rings since I was 9 years old because it is part of our culture. To me, being here, I felt happy; although I didn’t get to go to school, I get to help my mother make a living.”

Though it’s more secure, life in Thailand remains hard for the migrants in Huai Sua Tao. The village is poorly developed, with a trickle of electricity just powerful enough to charge phones or power an old TV in the cramped wooden homes. That’s part of the experience tourists are buying.

“Tourists will not be keen on coming for a visit if the village is developed,” says Boonrat Santisuk, who works at the entrance to the village collecting the admission fee.

She says that after the women have spent enough time there and saved money, they can afford to build a house in the more developed part of the village just up the hill, where regular Thai villagers live outside the tourist area. 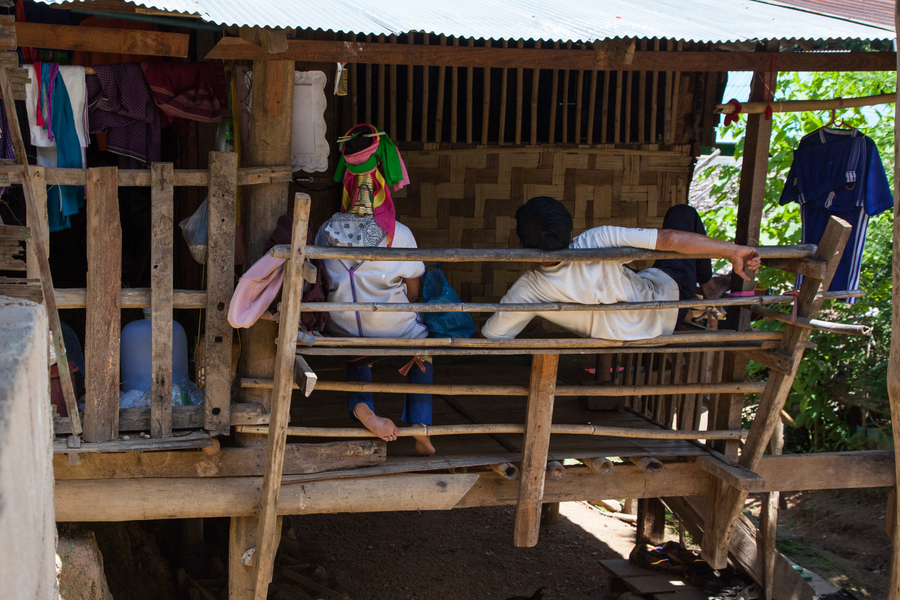 One of the women at Huai Sua Tao rests at her home while there are no tourists visiting. Most of the village's business is during the winter months, as few tourists come during the monsoon and dry seasons.

Beyond here opportunities to live and work in Thailand are severely limited for undocumented migrants like the Kayah, and costs of living can be significantly higher, so moving much farther than up the hill isn’t easy. The women and their families are mostly free to travel and work within Mae Hong Son, but in order to even go to another province they need to apply for permission, and special work permits must be obtained for those seeking employment.

“There are an estimated 3 million migrant workers from Myanmar in Thailand, of whom only half have secured work permits through the formal migration process,” explains Duncan McArthur, director of the Thai-Burma Border Consortium, a prominent local NGO providing aid to Myanmar refugees. “Registered migrant workers have the right to work but movement is restricted to their designated province, unless specifically authorized. Undocumented migrant workers and refugees who live outside of camps are officially considered as illegal immigrants and subject to deportation.” 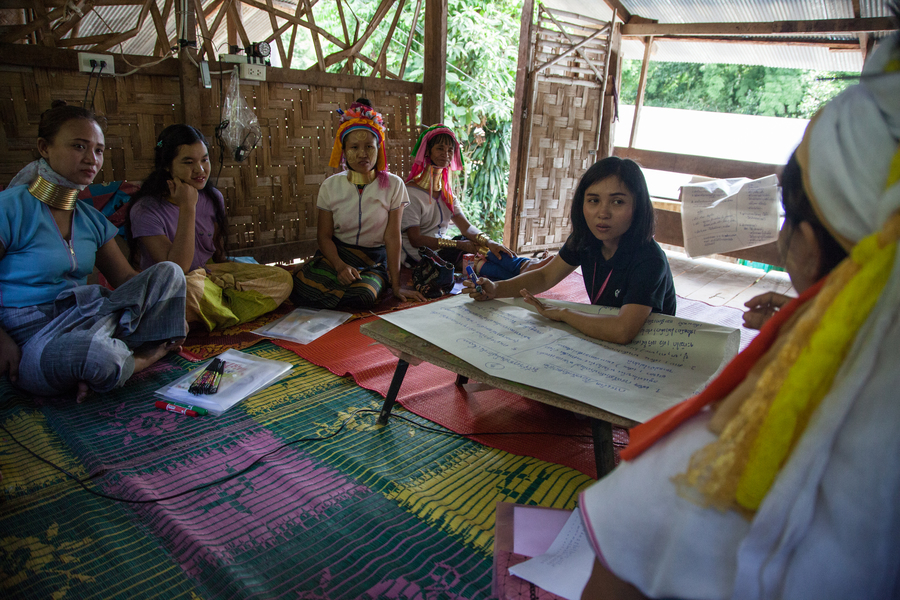 Women at Huai Sua Tao gather in a communal bamboo house for a meeting with province officials who came to gather information about their culture for educational purposes.

Recent government legislation cracking down on businesses who hire undocumented workers has made it increasingly difficult for refugees trying to live outside of camps. Thousands have moved across the border back to Myanmar.

For the women of Huai Sua Tao, and their counterparts in other long neck villages, this means even fewer options — but they are in a unique position because their culture is a valuable commodity.

Long neck villages have also popped up around Chiang Mai and Pattaya, a notorious sex-tourism capital located hundreds of miles south of Mae Hong Son. The three long neck villages in Pattaya are new, having opened up this year, primarily catering to Chinese tourists, according to Boonrat Santisuk. Chiang Mai province, though not as lucrative as Pattaya, has the advantage of being next to Mae Hong Son and more closely resembling Kayah's lives back in Myanmar.

“In Pattaya, the salary is the highest, and the second highest is in Chiang Mai; here is the lowest,” says Ma Pang, who said she was waiting for a permit to go work in Pattaya for a couple of months. She is hardly the first woman to leave in search of better money, especially during rainy season, when tourism is low in remote areas like Mae Hong Son.

But her husband, 4-year-old daughter and 10-year-old son would stay behind. Ma Pang says that without a Thai national ID card, her children would not be able to go to school in Pattaya, whereas they can attend a local Thai school in Huai Sua Tao.

“At first I want to stay longer [in Pattaya], but then with my small child, I feel bad when he gets sick and his dad doesn’t know how to take care of him,” she says. 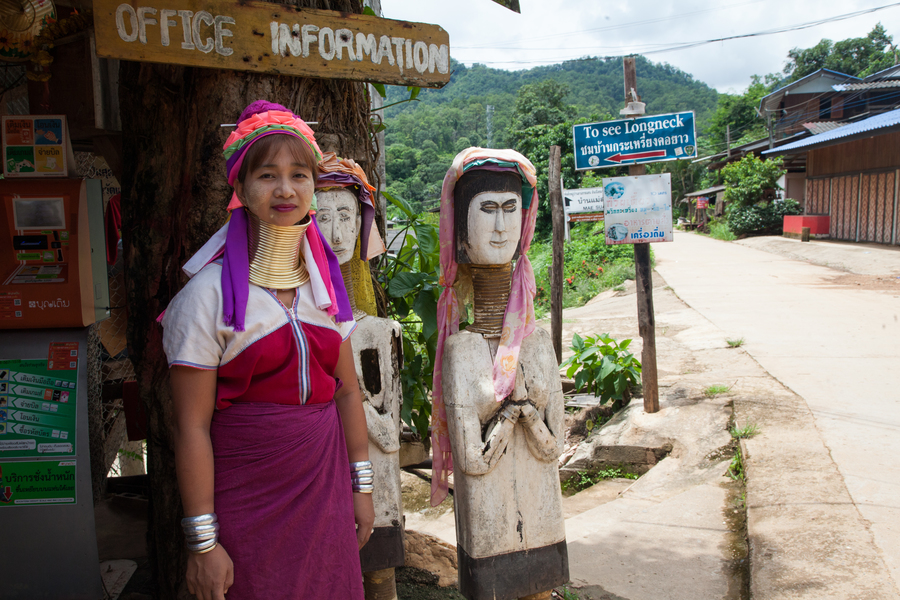 Ma Pang stands at the entrance to Huai Sua Tao.

Ma Ja says that between her family, the lack of long-term job security in Pattaya and the familiarity of life in Huai Sua Tao, she does not plan on going anywhere. And although she stresses that the majority of women, including her, appreciate living in Huia Sua Tao and want tourists to visit them there, she cannot help but long for something different.

“I didn’t have a choice; if I were to be educated I would be doing something else … not just being taken pictures of. I feel like life has more to offer, not just this,” she says.