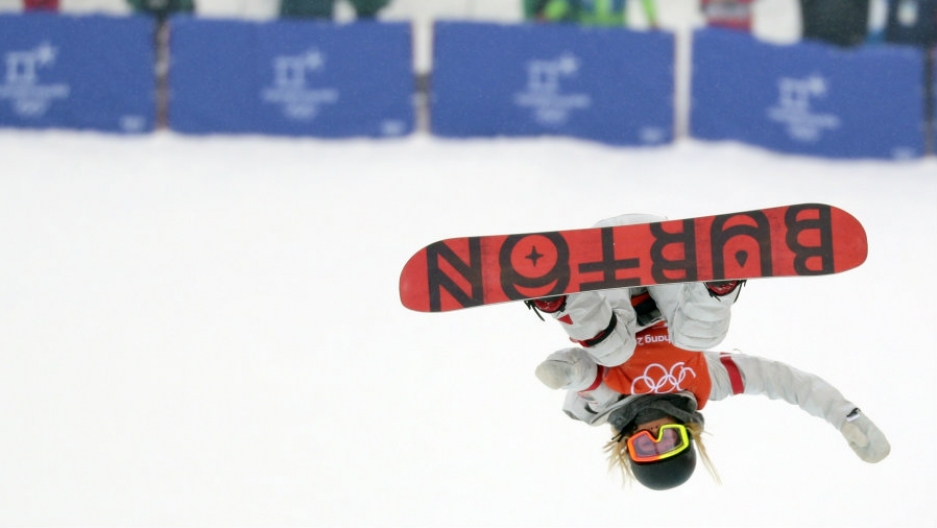 At the Pyeongchang 2018 Winter Olympics, Chloe Kim trains for the halfpipe on Feb. 10, 2018. She won gold with back-to-back 1080s on her third run three days later.

The media frenzy around 17-year-old snowboarder Chloe Kim is deserved. She’s the youngest female snowboarder to win gold at the Winter Olympics. During competition on the halfpipe, she earned a near-perfect score while showing off her signature back-to-back 1080s — she’s the first to do the move in competition.

But beyond her athletic feats, the media and general public cannot seem to get enough of her and her family’s immigrant story. Chloe is a snowboarding prodigy who showed talent at a young age. Her father, Jong Jin Kim, nurtured her skills.

He left his own career and spent hours driving from their Southern California home to mountain resorts so Chloe could train with the best. Jong Jin was there at every crucial moment of Chloe’s career, including her epic run at the Olympics Monday.

After the competition, Jong Jin reportedly pointed to himself and said “American dream!”

The bond between father and daughter, narrated on TV and across the internet, pulled at heartstrings. On Twitter, Chloe paid tribute to her parents, calling them “amazing humans.” That Chloe won in South Korea, her parents’ home country, only added to the story.

The Kim family also became part of  the US Senate’s immigration debate. Sen. Dick Durbin talked about Jong Jin’s journey to America and Chloe’s medal as an example of the immigrant success story.

In the Global Nation Exchange on Facebook: We’re talking about the Olympics. Join us!

"It's a story of an immigrant family. A man who might not have passed some of the merit-based tests that we're hearing around here," Durbin said Tuesday on the Senate floor. "But who came to the United States determined to make a life and to bring a family forward."

Those who study and write about Korean American communities in the US say having one of their own featured so prominently in media and in politics is significant, especially at a critical point in the debate on immigration. But the spotlight is also concerning.

“The ‘exceptional immigrant’ is always problematic,” says Ju-Hyun Park, who writes about the Korean diaspora for PRI and elsewhere. “It reduces the immigrant life to whatever benefit they could provide to the host country.”

Edward Tae-Han Chang, a professor of ethnic studies and founder of the Young Oak Kim Center for Korean American Studies at University of California Riverside, calls it a “double-edge sword.”

“On one hand we are blamed for being too successful,” says Chang. “On the other hand, we are used as a model minority, pitting minority against minorities. So we have to balance ourselves.”

HJ Lee, co-founder and president of KoreanAmericanStory.org, a non-profit organization that produces multimedia stories about the Korean American community, points out that Durbin during his speech highlighted other immigrant stories aside from Chloe's family. For example, Durbin talked about his own family's immigration story and mentioned Tereza Lee, an undocumented Korean American who inspired him to introduce the DREAM Act in 2001. The bill would have granted a path to citizenship for some undocumented people brought to the US as children.

"Any time you have an opportunity to humanize a disenfranchised group — because we're always made to be perpetual foreigner — seeing someone like Chloe embraced is great,” says Lee. “But not everyone is Chloe.”

Lee says there are about 1.7 million Korean Americans in the US. Koreans first entered the US mainland after the Korean War ended in the mid-1950s as adoptees, military spouses and students. (Koreans were brought to Hawaii to work in the sugarcane fields in the early 1900s). But the doors truly opened for Korean immigrants starting in the late 70s and 80s.

According to the Migration Policy Institute, the Immigration and Naturalization Act of 1965 removed restrictions for Asian countries and Korean immigration to the US jumped from 39,000 in 1970 to 290,000 in 1980. That number doubled again by 1990. Jong Jin came to the US in the early 80s, at 26 years old.

More about how the 1965 immigration law ended discriminatory policies.

According to ESPN, Jong Jin arrived with about $800 and a Korean-English dictionary. He worked low-wage jobs as a dishwasher and cashier at a liquor store before earning a degree in engineering.

Chloe was born in Long Beach and grew up in Torrance, cities in the South Bay of the Los Angeles’ metro. His daughter’s triumph was also his.

It’s a very neatly packaged story, without touching complexities, including the current political tensions between the US and North Korea, says Park. It’s like immigrants are part of a balance sheet.

“We take all the immigrants who do good things and take the immigrants who do bad things and we're supposed to look at them side by side,” says Park. “Then we take the good ones but not the bad ones, and it’s rooted in the idea people don't have a right to migrate and that people can be expelled from certain places, based on nationality and race, depending on whether they bring anything to the table. Even though they are not at the table to begin with.”

Lee says it’s important to celebrate the accomplishments of those who are successful. But it’s just as critical remember that everyone’s story is just as worthwhile.

“Even in the Korean American microcosm, it’s extremely diverse. People are in all kinds of different fields, including snowboarding,” he says. “We don't want to shortchange anyone.”

Next: This woman has been stuck in Korea for three years trying to get home to the US