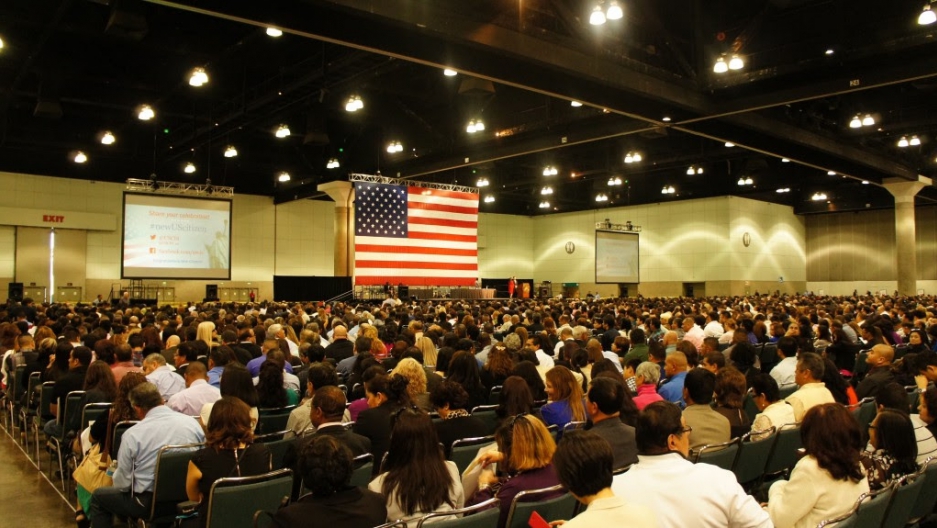 Immigrants at a mass citizenship ceremony at the Los Angeles Convention Center. Along with swearing their allegiance to the United States, the new citizens watch a video by President Obama welcoming them.

About every month something really big happens at the Los Angeles Convention Center. Thousands of immigrants to the United States file into one of the center's cavernous halls and sit in neat rows before a stage with an enormous American flag above it. They come to be sworn in as new citizens of this country.

In the ceremony I attended, there were more than 6,000 people from 140 countries. Some of the largest numbers of people came from countries like China, the Philippines, Armenia and Iran. But more than 50 years ago, that kind of national diversity in an American citizenship ceremony just wouldn't have been seen.

"Before 1965 we had an explicitly discriminatory admission policy for immigrants coming to this country," says Hiroshi Motomura, a professor of law and an expert on the history of America's immigration laws. He says that for much of the 20th Century, those laws favored white, Western Europeans for admission into the United States and made it very difficult for people from other parts of the world to settle in the country and eventually become American citizens.

"Back in the 1920s, Congress decided that it wanted to preserve the ethnic population as it existed around the turn of the 20th Century," says Motomura." So it basically put quotas, or limits, on the number of people who came from certain countries." 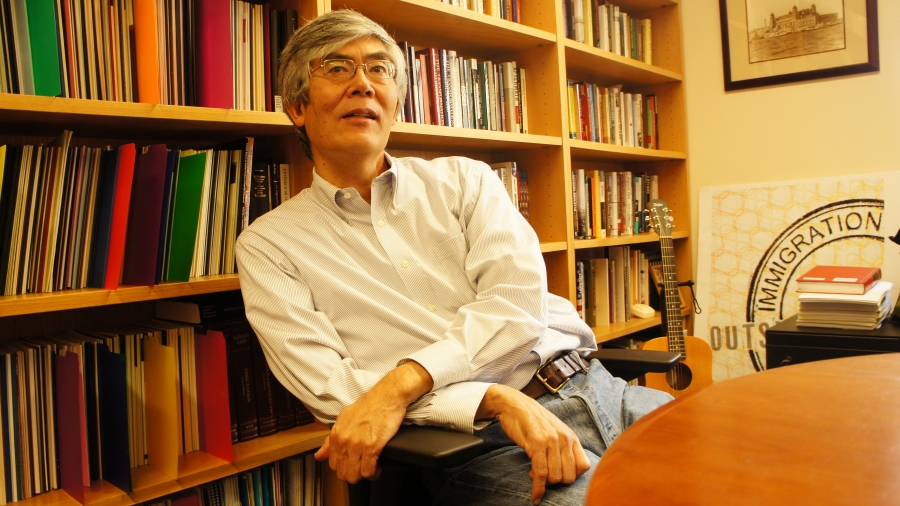 UCLA professor Hiroshi Motomura, an expert on the history of America's immigration laws, says it's a myth that the United States has had an open-door policy to immigrants. For most of the 20th century, the US tightly restricted immigration from most parts of the world as a way to ensure white dominance in America's demographics.

The 1924 bill, called the National Origins Act, clamped down on immigration from Eastern and Southern Europe, Asia, Africa and the the Middle East in favor of Western Europeans. The late congressman, Albert Johnson of Washington State, helped author the bill and called it a "bulwark against the stream of alien blood" coming into the country.

"This was very much a quasi, or perhaps, pseudo-scientific view of immigration," says Motomura.  "That if we let the 'right people,' in, not only will this country maintain its ethnic composition, somehow it will lead to a better and more intelligent America."

Yet those ideas fell into disrepute after World War II, as calls grew to reform America's racist immigration restrictions. That eventually led to Congress passing a landmark piece of legislation 50 years ago this year, the Immigration and Nationality Act of 1965, also known as the Hart-Celler Act for its sponsors in Congress.

At a presidential signing ceremony on New York's Liberty Island, in the shadow of the Statue of Liberty, President Lyndon Baines Johnson promised that it would be good for America. "This measure that we sign today will make us truer to ourselves, both as a country and as a people" said Johnson.

The Immigration Act abolished America's old, race-based immigration quotas and replaced them with a preference system based on immigrants' skills and the family relationships they had with US citizens or legal residents.

​And to this land the immigrants came, in greater numbers and in greater variety than expected, and they began changing the country and especially Southern California. It's after 1965 that the Los Angeles area starts evolving into the multi-national and multi-cultural crossroads that we know today. Take this striking comparison: The 1960 census reported that more than 5 million of Los Angeles County's population of 6 million people were white and largely native born. Now, only about a third of the city's population is white, and over 35 percent of Los Angeles County residents are foreign-born. The region, in fact, has the largest number of Filipinos, Armenians, Ethiopians, Thais, Taiwanese and Koreans outside of their countries of origin.

Those who are old enough have seen these sweeping demographic changes with their own eyes. "When I first arrived here there were a total of 1,000 Koreans living in the Los Angeles metropolitan area," says William Min, an attorney and Koreatown resident who came to the United States in the 1940s when his father was sent as the Republic of Korea's first counsel-general to Los Angeles.

Min remembers a time when LA's Koreatown, now home to the largest concentration of Korean Americans in the country, had few people from Korea. But that started to change after the passage of the Immigration Act of 1965 and the arrival of new immigrants. "Suddenly, I walked down the boulevard, Olympic Boulevard, and I start hearing Korean conversation," he recalls. "And that was a big surprise to me. And then I saw hand-written commercial signs start to pop up and Korean items were being displayed. That was a very exciting surprise."

But the Immigration Act of 1965 also planted the seeds of future immigration problems. While it lifted immigration restrictions for people from many parts of the world, to make it politically palatable it also established for the first time formal quotas on migration from Latin America, creating persistent immigration problems that America wrestles with to this day. "What it did was say, OK, we're going to end the formal discrimination, but that means we're going to treat all countries the same, " says Motomura. "But treating all countries the same meant now, for the first time, we're going to limit Mexican immigration. That created a situation that has led to more than 10 million people in the country without lawful status."

Ruben Navarette, a columnist with the Washington Post Writers Group, criticizes the provision in the 1965 law that makes family reunification a top priority. “We need to stop emphasizing family reunification in favour of demand," he says. "If you need nurses, bring nurses. Don’t bring engineers just because they have better SAT scores. Getting into the United States should not be like getting into Yale or Harvard,” Navarette says.

But the debate over legal immigration has not even started, Navarette adds. “What is our plan for folks who want to come here legally? We still don’t know,” he says.

Illegal immigration, on the other hand, has already become a hot-button issue in the 2016 presidential race. Navarette says both major political parties are guilty of being disingenuous. Democrats want support from Latino voters who support comprehensive immigration reform, but they also fear raising the ire of organized labor, which doesn’t want to open up the country’s borders to lots of new workers.

The Republicans, Navarette says, are caught between the pro-business camp that wants a steady flow of low-wage workers to continue and the nativist wing of the party that wants to stem that flow. “It’s a tough pickle for both parties," says Navarette. "And they get through it by lying to everyone all the time.”

This story is a combination of segments from PRI's The World and PRI's To The Point. Listen to the segment from To The Point, below.