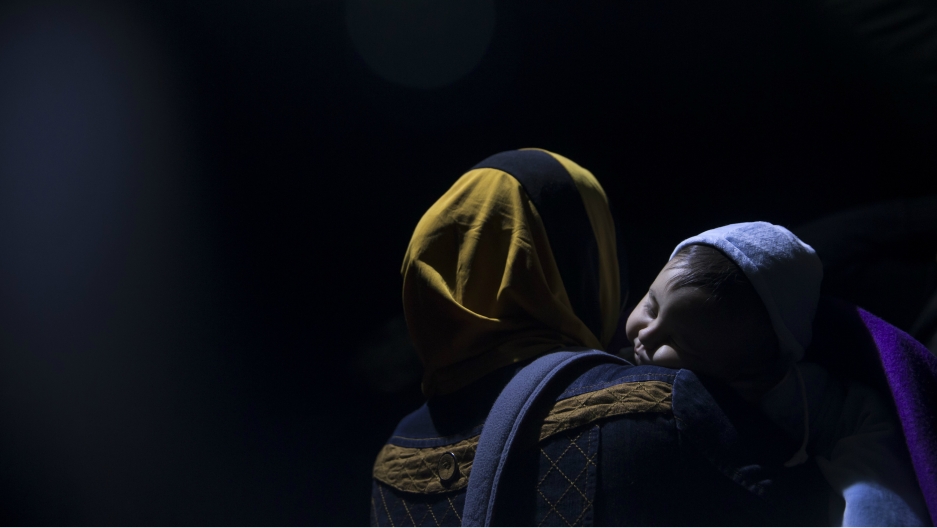 A migrant carrying a child waits to cross the border with Croatia near the village of Berkasovo, Serbia, Oct. 19, 2015. Women face assault, harassment and sexual violence at every step of the way along the European migrant trail, including on European soil. And there are signs that it's gotten even more dangerous for women migrants since European countries closed their borders and pushed the trail underground.

When Simin reached Europe, she thought the hardest part of her journey was behind her.

She left her native Iran, where she had lived all of her 44 years, because she feared being arrested for her work as a journalist.

It took her three months to travel from Iran to Serbia, much of it by foot across mountains and borders.

But it was when she was crossing into Croatia that the worst happened. She was raped by two smugglers, themselves migrants, from Afghanistan.

“The smugglers forced me to be with them. He threatened to not let me get in the car if I refused being with him,” says Simin, who is living in a center for refugees on the outskirts of Zagreb, Croatia.

Simin’s story is one of many similar accounts from women who have traveled the European migrant trail since the crisis began in 2015.

Rights groups say women face assault, harassment and sexual violence at every step of the way along the trail, including on European soil.

And there are signs that the environment for attacks against women along the route has only worsened since the height of the crisis. European countries have closed their borders and pushed the trail underground, putting women at greater risk than ever before.

Many sexual crimes go unreported due to the precarious legal status of the victims as they cross borders and try to avoid authorities. And even when women do report incidents they have little hope of justice, for the same reason. 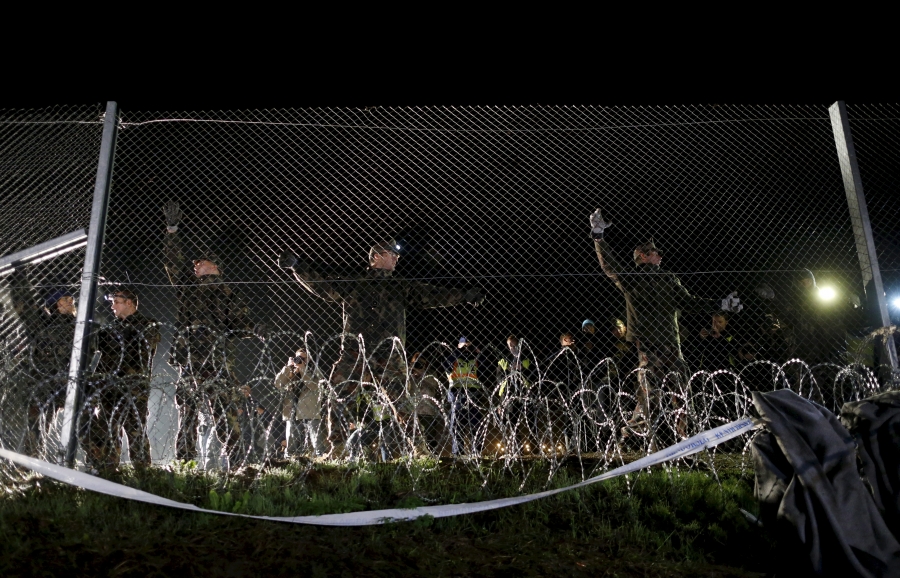 Hungarian soldiers close a border with Croatia near the village of Botovo, Croatia, on Oct. 17, 2015.

It’s hard to know the true scale of sexual violence against women migrants, but interviews conducted by NGOs suggest the problem is endemic.

A survey by Oxfam of African migrants who traveled through Libya found that all but one of the 31 women who spoke to the organization were victims of sexual assault in the country.

So common were stories of rape along the Libya route, that many women who traveled it reported bringing contraception with them.

The danger doesn’t stop when migrants reach Europe. In 2016, Amnesty International interviewed 40 refugee women and girls in Germany and Norway who came from Turkey to Greece and on through the Balkans.

“Many reported that in almost all of the countries they passed through they experienced physical abuse and financial exploitation, being groped or pressured to have sex by smugglers, security staff or other refugees,” the report said.

Women traveling on their own, like Simin, or with just their children, were particularly at risk.

The most dangerous thing

After Simin was attacked, she still had a long journey ahead of her. She was trying to get to Germany to join friends who were living there. She says she hoped to continue with her journalism, writing about “democracy, women’s issues, asylum-seekers and hidden truths.”

Simin’s attackers sent her back to Serbia. In shock, and with nowhere to turn, she had to cross the border into Croatia again.

“We had to walk through a forest at night. My shoes were torn,” she says. “I could hear wild dogs howling.”

And things continued to get worse when she got to the other side.

“I was mistreated by the police after my capture,” she says. “The officer told me that I was a filthy refugee. They said, ‘We don’t want you here.’”

When she was detained by police, Simin was fingerprinted and registered as an asylum-seeker. Under European Union rules, that meant she could not travel onward to Germany, but must seek asylum in Croatia. She was stuck. 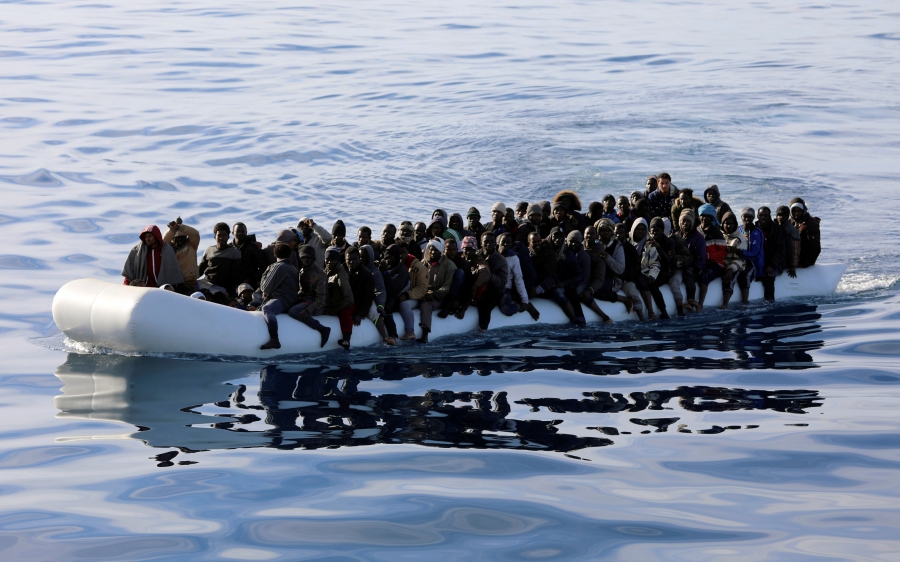 Migrants in a rubber dinghy are rescued by Libyan coast guards in the Mediterranean Sea off the coast of Libya, Jan. 15, 2018. Stories of rape along the migrant route through Libya are so common that many women who traveled it reported bringing contraception with them.

Croatia has never really been a destination for migrants and refugees on the trail. In the summer of 2015, when the migrant crisis was at its peak, the vast majority were heading to Germany or Sweden — both of which were already home to large migrant communities, and were offering a warmer welcome than the Balkans.

The Croatian government bussed migrants through the country to the Hungarian border and sent them on their way. The Hungarians did the same. More than 1 million refugees ended up in Germany. The Balkans were transit countries, never destinations.

More from this series: Trapped by border closings, these young migrants hide out in an abandoned warehouse

The same is true today. There were only 1,000 asylum applications in Croatia in 2017, compared to 150,000 in Germany. But, as Simin’s case shows, it is much harder for migrants to reach Germany than it was three years ago.

The large numbers of people arriving on Europe’s shores in 2015 and 2016 scared governments into action, and many closed their borders. Thousands who were already on the trail were trapped along the way.

The migrant trail was pushed underground. It became smaller, but meaner. For women traveling the route, it became much more dangerous.

“The most dangerous thing for women and girls is illegal routes,” says Gauri van Gulik, Europe director for Amnesty International.

“The lack of safe, legal routes for women and girls to travel through means a heightened risk of sexual violence. Smugglers have so much control over these women. Women are unable to control their own fate, their own destiny,” she adds.

Following her attack, Simin was faced with that same inability to control her destiny all over again in Croatia. As far as she sees it, not only is she being forced to stay in a place she knows nothing about, it’s also a place where she has been treated horribly. She feels she can’t move on from what happened to her — not for as long as she is in Croatia.

“I have bad memories from here,” she says. “I’m under psychological pressure.”

“I thought that Iranian police was bad. But police here is worse. I knew Iran wasn’t a democracy. But there is no democracy here, either.”

More from this series: Migrants stuck in Serbia play a desperate 'game' to reach the EU

After a couple of weeks in Croatia, Simin tried to reach Germany anyway. She got as far as Slovenia before she was picked up. Her fingerprints were checked and she was sent back to Croatia.

The restrictions on movement that were not applied to the million people who came before her are now in full force.

“I left Iran to find democracy and a better life,” she says. “All I can say is that I’m experiencing a slow death in this cage. No one has helped me. I’m being continually mistreated and humiliated. I just want to escape this dungeon.”

Today, even though the road ahead of her is closed, Simin has not given up on trying to reach Germany.

“They took my fingerprint. But I will continue. I’ll die if I stay here.”

Editor's note: Simin asked not to use her full name due to the sensitive nature of her story.