Awa with her 1 and 4-year-old children, and her 14-year-old niece, after a rescue ship carried them from waters near Libya across the Mediterranean to Italy.

Awa had traveled more than 2,000 miles from her home in Sierra Leone by the time she reached the Libyan desert.

She knew she was heading into danger, but it was too late to turn back. She got into a smuggler’s car with her two young children and teenage niece, and headed out into the imposing emptiness.

They had driven less than an hour when a group of armed men stopped their car.

“Our vehicle was attacked,” she says. “They ask you to pay money. If you don’t have it, they will not release you. They will punish you.”

Awa, 35, was taken to a migrant detention center in the capital Tripoli, where she says she was held for five months and subject to regular beatings until she was able to escape.

Now she is safe on the deck of a ship whose crew of humanitarian workers rescued her, along with hundreds of others, from the waters off the Libyan coast just 24 hours earlier. Everyone on board has a similar story of hell from their time passing through the country.

Over the past few years, Libya has become a “torture archipelago,” according to the International Organization for Migration. It is a place where migrants trying to reach Europe face the real prospect of being sold into slave markets, abuse, rape and detention.

Since the ouster of despot Col. Muammar Gaddafi in 2011, Libya has existed in a state of chaos and lawlessness. A fragile United Nations-backed government holds sway in Tripoli, but rival militias control the rest of the North African country’s coastline.

Abuse is rampant both in government-run facilities and in the secret dungeons of unaccountable militia groups. Smugglers have thrived in the absence of a central authority, packing increasingly unsafe boats with greater numbers of people.

The European Union has responded to the crisis by pouring money into the country, to boost its capacity for keeping migrants from reaching Europe. In February, EU leaders agreed to provide Libya’s UN-backed government with $215 million to disrupt smuggler networks and improve conditions at detention centers.

But rights groups have criticized the EU response, arguing that its actions will only create a bottleneck of migrants in a country in which they are likely to endure rights abuses.

Arjan Hehenkamp, the general director of Doctors Without Borders, has accused the EU of “misrepresenting the reality on the ground” with its plan.

“Libya is not a safe place and blocking people in the country or returning them to Libya makes a mockery of the EU’s so-called fundamental values of human dignity and rule of law,” he said.

Hundreds of people rescued in the Mediterranean Sea are wrapped in blankets and resting in all corners of Save the Children's ship.

On the Vos Hestia, a rescue ship run by Save the Children, hundreds of exhausted migrants are sprawled and huddled in whatever space they can find. The charity workers pulled them from unsafe and overloaded dinghies heading across the Mediterranean toward Europe. Some of the migrants had to be plucked from the water after their boats capsized.

The sea journey is deadly — more than 2,000 have died or gone missing in Mediterranean crossings so far this year. But even after their dramatic rescue from the water, the passengers of the Vos Hestia are consumed by what they endured in Libya.

Libya does not distinguish between migrants and asylum-seekers. A Gaddafi-era law stipulates that anyone arriving without a valid permit is detained and treated as a criminal.

Awa, the mother from Sierra Leone, only escaped after her captors let down their guard.

“They just forgot,” she says, sitting in the clinic on board the ship as it heads toward port in Italy.

“They left the door open, so I was able to escape. I ran into the streets and I don’t know anyone. So I began to run and run and run and came into an empty building with these kids. I don’t have anything with me.”

She was found by a local man, who brought her food and later took her to where the migrant boats left from.

“When we reached the seaside, he left me there. I see this boat, I see people enter, so I begged one man to take my baby. He took it and I climbed in. So this is how I find myself here.”

Awa’s husband fled Sierra Leone a year earlier for Germany, where he still lives. He took with him their two sons to avoid forced conscription into the powerful Sierra Leonean Poros Society. She followed him with her daughters, ages 1 and 4, fearing they would be subjected to female genital mutilation, which is part of the initiation for women.

“For us, we already went through it. We already know the effects. So I will not allow that for [the girls].”

“Libya is not safe for us blacks.”

Testimony from people on board the Vos Hestia and others who have survived the journey suggests that black Africans — both migrants and long-term residents — are being targeted on a massive scale in Libya.

An estimated 2.5 million sub-Saharan Africans came to Libya to work and study during Gaddafi’s reign. Some observers say racism toward black people in Libya grew under the leader’s 41-year rule.

When the Libyan revolution broke out in 2011, black Africans were targeted en masse. Rebel fighters accused them of being mercenaries hired by Gaddafi to quash the uprising, and they have faced discrimination and attacks ever since. 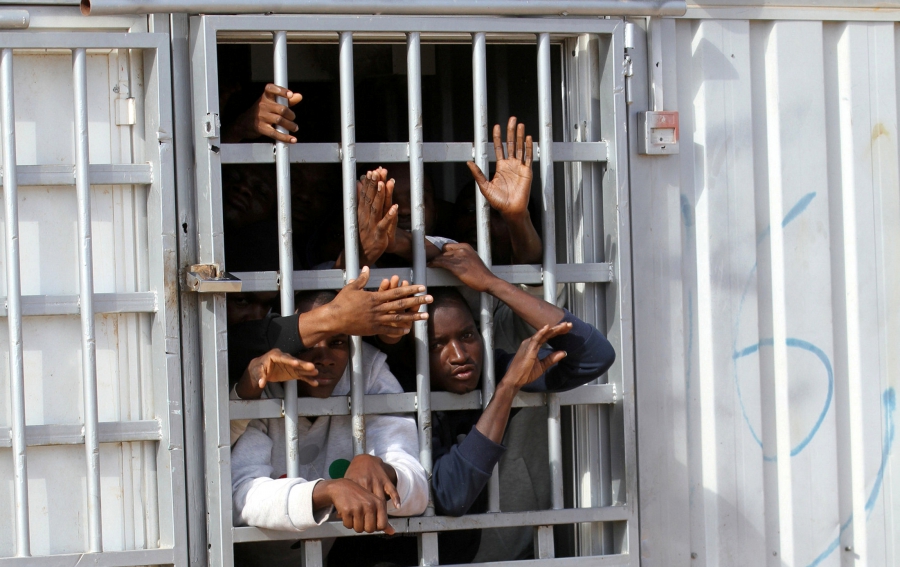 Migrants detained after trying to get to Europe wait in a detention camp in Gheryan, outside Tripoli, Libya, on Dec. 1, 2016.

Jackson, 42, came from Liberia in June 2016 with the intention of traveling to Europe and was detained upon arrival. He lost two sisters in the country’s 2014 Ebola crisis, and his family never recovered. But what he found on the road was worse than he ever imagined.

“You don’t know what you have done or when you will come out,” he says. “Libya is not safe for us blacks. We don’t have any peace. It is like you are in a hole. You cannot communicate with your families. Our families don’t know where we are today.”

It is a story repeated from the deck to the bow of the boat.

Many who took the dangerous sea voyage had not arrived in Libya intending to travel on to Europe, but did so to escape from the conditions they faced in the country.

Prince, a 42-year-old man from Nigeria, had been in Libya for 10 years when clashes between rival militias broke out in the town where he lived. He was at the shop where he worked when he was abducted in the chaos of the clashes.

“They started shooting up and down. They were just picking up black people. They came into houses, pick you out, slash you, take your money, your phone, everything. They shot two people in front of me,” he says.

He faced horrific treatment at the hands of his captors.

“They use a hosepipe to beat you anyway they like, and if you die they drop you inside the desert,” he says.

The UN has described these centers as “inhumane” and called for the internationally recognized government in Tripoli to close them down.

Some officials in Libya have acknowledged problems with holding immigrants in the country. Hussein Thwardi, mayor of the busy departure city of Sabratha, Libya, told The New York Times that keeping migrants in the country is “dangerous” because Libya lacks the resources to deal with them. A spokesman of the UN-backed government, Jalal Othman, said to British newspaper the Independent that the country takes abuse accusations very seriously. "We condemn all mistreatment of migrants without reservation. While we have to be realistic about the state's current law-enforcement capacity, action will be taken wherever possible against those who break the law," Othman said.

The well-documented danger migrants face in Libya is central to the debate over how critics say the EU should address the current crisis.

Rights groups accuse the EU of putting lives at risk in an effort to stem immigration — from cutting its search and rescue missions in 2014, to its policy of pushing responsibility for rescues over to the Libyan coast guard, and therefore putting migrants into the hands of the Libyan authorities.

Critics argue that these policies are rooted in trying to address the “pull factors” — the things that might attract someone to take a boat to Europe. The idea that they will be rescued and taken to Europe if they just manage to get on a boat is one example.

Migrants on a boat after being detained at a Libyan navy base in Tripoli.

But the evidence suggests that rising deaths in the Mediterranean hasn’t stopped people from coming. There was a 33 percent increase in people taking the Libya-Italy route from January through April, compared to the same period in 2016 — a year of record fatalities.

Rights groups say it is in fact the “push factors” that are forcing people to take the deadly journey — war, poverty, famine and disease in their own countries, and the horrific conditions inside Libya.

Rob MacGillivray, Save the Children’s search and rescue director, said European states should focus on supporting Italy’s migrant relief efforts and address the problems across Africa that are causing migration.

“Saving lives — not border control — should be the overriding priority. Until the EU provides safe and legal routes to Europe, both for those in need of international protection and for other migrants, which ensure human rights and respect dignity, people will continue to risk their lives to reach Europe,” MacGillivray says.

“A long-term plan to tackle the root causes of unsafe and forced migration must also be established by increasing development aid for poor countries and working to end violence and persecution in their countries of origin.”

The EU says part of its plan aims to make the home countries of people trying to reach Europe safer. A $2.1 billion Africa Trust Fund agreed by the EU in 2015 was supposed to target countries from or through which migrants are departing: among them Nigeria, Niger, Mali, Ethiopia and Senegal.

That is a long-term plan. Aid workers on board the ships that patrol a frequent rescue zone off Libya’s coast say that without their presence, the Mediterranean Sea would be a graveyard.

The vast majority of those on board the Vos Hestia say were being pushed toward Europe. Many had no concept of how far or dangerous the journey would be. They knew only where they would depart, before they were pointed in the direction of Italy and told to steer straight.

Asked what he would tell his fellow Nigerians who were thinking of making the same trip he did, Prince replied: “They should not try it. It is hell.”

Full names and other details of interviewees and their journeys have been withheld at their request.