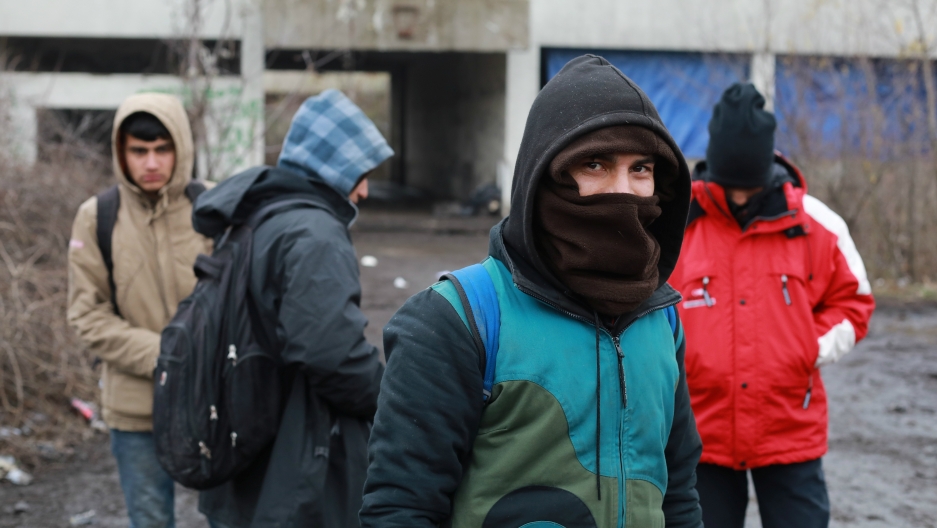 Migrants wait for food distribution inside an abandoned factory close to the Croatian border near the town of Sid, Serbia, Dec. 19, 2017. There are about 8,000 refugees and migrants stranded in Serbia, a result of a tougher European border policies that followed the migrant crisis of 2015.

The town of Sid, in western Serbia, is surrounded by vast acres of farmland that stretch for miles in all directions and into neighboring Croatia.

At the height of the migrant crisis in the summer of 2015, hundreds of thousands filed through tall cornfields and crossed the border, sometimes without knowing exactly when.

Reaching the other side marked the beginning of the end of their journey — no more hard borders, just a few buses and trains between them and western Europe.

“Many times I crossed into Croatia, more than 65 times. I even got to Slovenia,” says Sergey, a 26-year-old former translator from Afghanistan who gave only his first name.

“I crossed these borders but the Croatian police and the Slovenian police catch me and brought me back here to Serbia. I'm stuck here.”

In an empty building on the outskirts of Sid, Sergey gathered with around 30 migrants in the cold evening discussing how they might beat the odds, and the Croatian police.

They call it “the game,” and it’s one they always lose. No matter how far they get across the border, they are always sent back.

Sergey once got as far as the door of a United Nations office in the Croatian capital of Zagreb, where he tried to claim asylum. But he was turned away and brought back to Sid.

“I was crying. I told them to let me inside for registration, I want to get asylum here. The two UN employees spoke to the police, but the police didn’t let me,” he says.

“I was held for 14 hours in a police station before they brought me back to Serbia.” 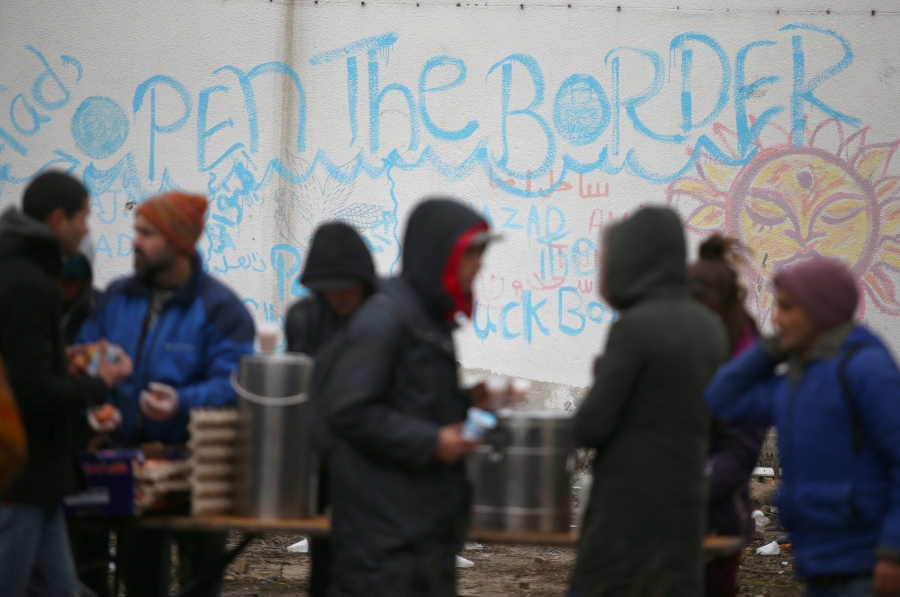 Migrants receive food inside an abandoned factory close to the Croatian border near the town of Sid, Serbia, Dec. 19, 2017.

The few still trying to make it across this way are mostly young men traveling alone. They are frustrated and tired. Many of them live in tents in a forest near the border. Some have turned to alcohol and drugs to ease the pain.

A man who calls himself Mickey, from Algeria, has been stuck in Sid for six months. He says he has tried to cross dozens of times. His arm is in a sling, a result of a beating he says he received at the hands of Croatian police.

“They take money, they take the phone,” he says. “It happens every day.”

A group of NGOs monitoring incidents on Serbia’s border had documented 110 reports of “illegal push-backs” involving more than 850 refugees and migrants between January and November in 2017. Fifty-two of those cases involved minors.

Last month, the practice had deadly consequences for a family from Afghanistan who were trying to cross.

Muslima Hussiny tried to cross with six of her 10 children. They reached Croatia and were picked up by the Croatian police around 8 p.m. She told them she was from Afghanistan and would like to claim asylum.

But they were told to follow a train track that would take them back across the border to Serbia.

As they made their way down the track, a train surprised them all. Everyone jumped out of the way. Muslima’s daughter, 6-year-old Madina, was struck and killed.

It took the Hussiny family four days to get Madina’s body back. They say the Serbian and Croatian authorities kept them in the dark and didn’t allow them to bury Madina according to the rules of their Islamic faith.

“Why did they think we are animals?” asks Madina’s 17-year-old sister Nilab. “We come for good life. We are guilty because of that? I think no.” 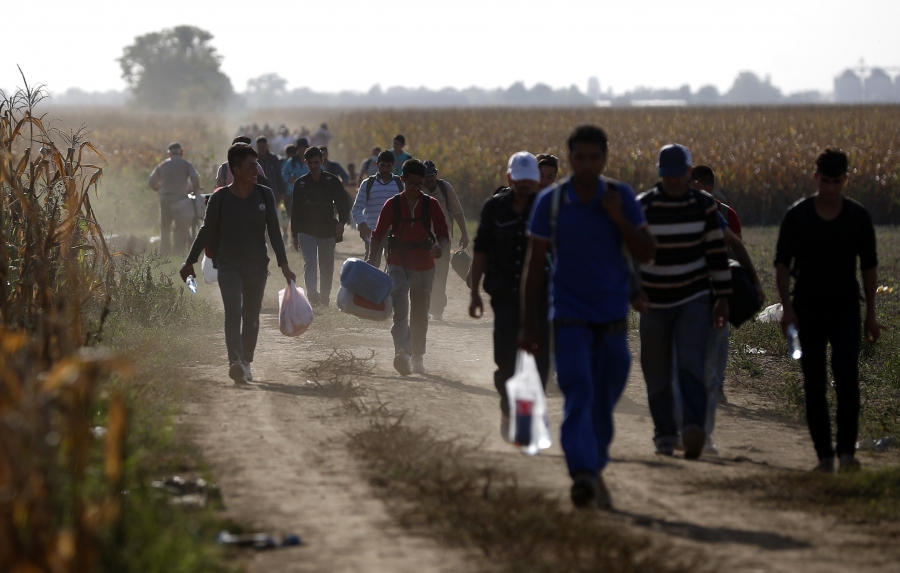 Migrants approach the Croatian border near the town of Sid, Serbia, Sept. 18, 2015.

The grim picture in Sid is the result of a tougher European policy toward migrants and refugees that followed the migrant crisis of 2015.

More than 1 million people arrived, provoking a backlash that contributed to the rise of right-wing parties across the continent.

The European Union’s open border policy was scrapped, border fences were erected in Hungary and Croatia, and a deal was struck to return any migrants arriving by the Greek islands to Turkey.

As a result, the Greek islands have become overcrowded and unsafe, and Serbia has been turned into a giant holding pen.

Related: Trapped by border closings, these young migrants are hiding out in an abandoned Lesbos warehouse

Nearly 8,000 refugees and migrants are currently stranded in the country, from Afghanistan, Pakistan, Iraq and Syria, among others.

It is only the most desperate that try to cross illegally. People with money can buy a smuggler to take them across. Iraqis and Syrians are more likely to be granted asylum legally.

But despite ongoing conflict in their country, nearly 50 percent of Afghans were rejected in 2016, and that was before push-backs were so widespread.

“Afghans have always had the short end of the stick in this response,” says Lucy Carrigan, from the International Rescue Committee. “Their options have, almost from the outset, been extremely limited.”

“And so they are stranded in Serbia with limited options available to them. EU leaders have got to — collectively — design more humane options for these people. Just because it’s complex doesn’t mean we can’t strive to find a solution.”

Because of their status, Afghans are the largest number among those playing “the game,” along with Pakistanis and migrants from the Maghreb region. 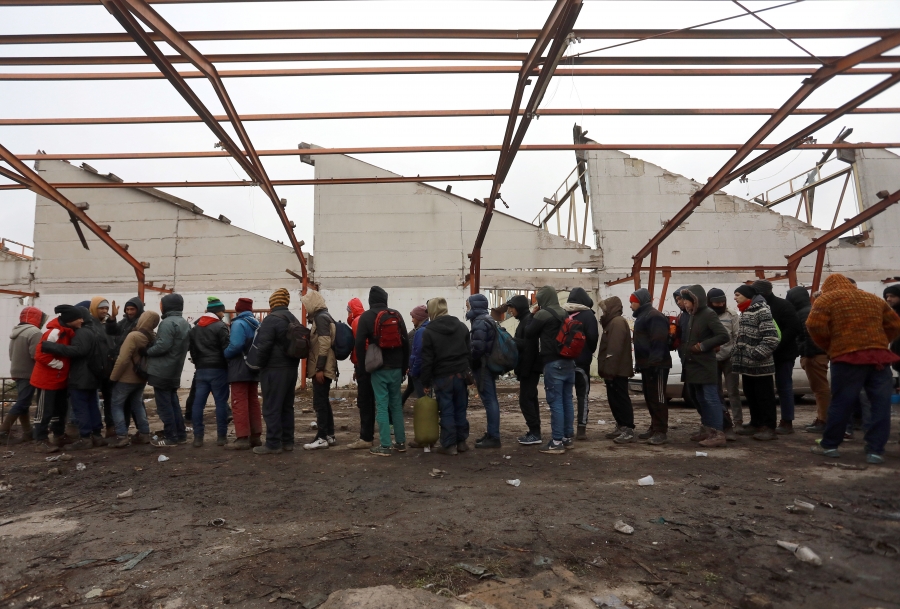 Migrants wait to receive food inside an abandoned factory close to the Croatian border near the town of Sid, Serbia, Dec. 19, 2017. Thousands of migrants and refugees remain stranded in the country. Iraqis and Syrians have the best chances of being granted asylum. Migrants with money can pay smugglers to bring them across the border. It's only the most desperate these days who try to cross illegally.

Adela al-Sharua is an aid worker who has worked along the trail since the crisis began, and has been in Sid for the past seven months. She’s a dual Syrian-Czech citizen, and some in her own family have traveled the migrant trail. Now, she runs a charity that washes clothes for migrants in the town, among other things.

Sharua says the change in the demographics of people still taking the Balkan route requires a different approach from the EU.

“This is no longer a humanitarian crisis like it was,” she says. “It’s a political issue.”

She says the problem won’t be solved with more camps or aid, but with a willingness by the EU to figure out how to deal with the many thousands who come to Europe in search of a better life.

“Many times I crossed into Croatia, more than 65 times. I even got to Slovenia. I crossed these borders but the Croatian police and the Slovenian police catch me and brought me back here to Serbia. I'm stuck here.” — Sergey, 26, from Afghanistan

Currently, Europe’s fear of more migrants arriving outweighs any concern for the well-being of people stuck in Sid. But Sharua says that won't halt the ongoing migration.

“The migration wave, it's was always here, that's normal,” she says. “But those people are like a river. The river will always find a different way. If we will not try to sort it out, these people always try to find a way to reach Europe.”

A group of migrants play drums and sing in an abandoned building in Sid, Serbia. Almost every night, they try to cross the border into Croatia.

Most aid groups are set up to help families, women and children, but a lot of Sharua’s work is focused on helping the young, vulnerable men at the back of line — like Sergey, the former translator from Afghanistan.

She worries about the consequences of leaving them all out here, with no hope.

“Many times, even in Greece, [these men] were telling me that Europe is growing the terrorists here, because we are getting frustrated. We have no future. We don't know what will happen with us. Sometimes we feel that we are treated worse than animals,” she says.