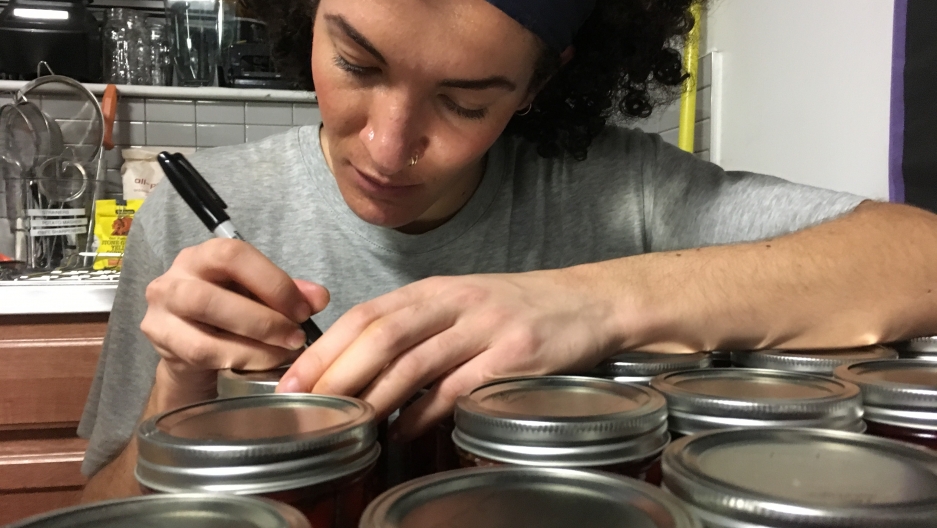 Charlie Anderle of the Queer Kitchen Brigade writes positive messages like Fuerza, meaning "strength" in Spanish, on Oct. 27, 2017, on jars that were distributed to people in Puerto Rico after Hurricane Maria. The Brooklyn, New York organization jarred vegetables to send as food aid.

“I mean, at one point they were giving them dehydrated, expired military meals or, like, powdered mashed potatoes,” says Pao Lebrón Guzmán, whose family in Puerto Rico received these types of meals. “None of it is real food and none of it comes from actual real vegetables or anything that you know has been freshly harvested.”

FEMA began distributing food within a week of Hurricane Maria’s touchdown on Sept. 20, 2017. The agency says more than 57 million meals have been delivered to Puerto Rico as of Jan. 23, 2018. It reported this week that it will stop distributing food and water on Jan. 31, four months after the disaster began, but then said that date was provided in error.

“It was the largest food and water operation in the history of FEMA,” says spokesperson Daniel Llargues. “If you’re in the middle of a disaster and you’re a kid, if you’re a father, maybe having a KitKat is a good idea to get through the day. We didn’t give one of these boxes, snack packs, and that’s your meal for the day. That was in addition to hot meals, grocery boxes, MREs, but it wasn’t just, ‘Here’s your meal and it’s just a snack pack.'”

But Gabriela Maraver Miranda, 26, who lives in San Juan, says that for weeks it was difficult to find healthier options. Junk food and canned food were the only things available when she went to the supermarket after Hurricane Maria.

“We really wanted to eat things that were nourishing, but we ended up with a bunch of soups that nobody wanted,” she says in Spanish.

Maraver Miranda became even more frustrated when she opened a FEMA box in November. Like many other Puerto Ricans, she took her annoyance to Twitter and shared a picture of the box’s contents, an assortment of cookies, pudding, crackers and canned pasta.

"We were actually very grateful that we got something, but the fact that we were grateful didn’t obscure how humiliating it felt or even the fact that the food was bad," she says. Maraver Miranda says that in December, three months after the hurricane, she was still without power and refrigeration.

About a third of Puerto Rico’s 1.5 million electricity customers are still without power now.

Lebrón Guzmán is trying to help by being part of the Queer Kitchen Brigade in Brooklyn, a grassroots initiative of about 15 people that coordinated and hosted canning sessions after the hurricane. Volunteers cleaned, chopped and preserved fresh produce that was donated by local farmers. The organization sent more than 400 jars of produce such as pickled carrots, roasted peppers and tomato sauce to Puerto Rico at the end of December. 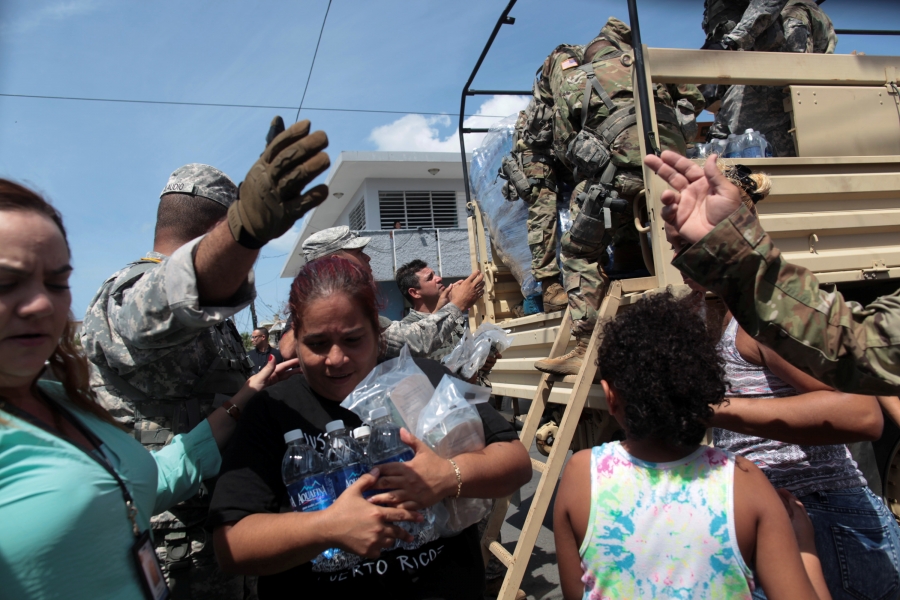 A woman carries bottles of water and food during a distribution of relief items after Hurricane Maria hit San Juan, Puerto Rico on Sept. 24, 2017.

Also: Meet the women combing through Puerto Rico, searching for veterans in need

The Queer Kitchen Brigade’s efforts were small compared to the tremendous need on the island, though.

FEMA spokesperson Llargues says the efforts to feed Puerto Ricans after the hurricane were complicated because roads were destroyed and there was no power on the island. The agency worked with many organizations, including the Salvation Army, to open kitchens and provide hot meals across the island.

“The Defense Logistics Agency brought meals too,” says Llargues. “In those meals there were snack packs, and the snack packs had crackers and cookies and things like that.” He says the packs also contained sandwiches and a small candy.

The Defense Logistics Agency is a section within the US Department of Defense that works with FEMA. The DLA calls the snack packs “commercial shelf-stable meals,” meaning they can last at least nine months without refrigeration. The meals have at least 600 calories and contain an entree, a starch, fruit and dessert. DLA has provided these types of meals during Hurricane Katrina, Harvey and Irma.

FEMA ordered 73 million shelf stable meals from the DLA, according to Michelle McCaskill, chief of DLA Media Relations. “They did not send that entire number to Puerto Rico,” she says. “They have them standing by for other operations they might need them for.”

The agency also provided FEMA with 600,000 cases of MREs, which have about 12 meals per case, for its relief efforts in Puerto Rico.

“We provide what FEMA asks,” says McCaskill. “FEMA asked us for items for disaster situations to be able to feed people and so that’s what we went out and bought.”

PRI asked two FEMA spokespeople how much of each type of food item was sent to Puerto Rico after Hurricane Maria and when, but they did not provide exact numbers.

The long-term nature of the aid, though, is what concerns the Queer Kitchen Brigade and many people in Puerto Rico.

Puerto Rico, along with Guam and Mississippi, has the highest prevalence of diabetes in the US. In 2015, 14 percent of Puerto Rican adults had diabetes, according to the Center for Disease Control and Prevention.

“Candies don’t contribute any nutritional value,” says Uriyoan Colón Ramos, a public health nutrition researcher at George Washington University. “You have to think smartly about the nutritional and health profile of the population.”

In November, Colón Ramos traveled to Barranquitas, a mountainous town in the central part of Puerto Rico, to document the nutritional profile of the food that was being distributed by FEMA. To rule out the possibility that someone was taking out all the healthy options and leaving the junk food in the boxes, Colón Ramos and a team of students tracked relief boxes from FEMA’s central distribution center on the island to the town.

Colón Ramos and another team of students at Milken Institute School of Public Health also searched through hashtags such as #HurricaneMaria and #FEMA on Twitter and Facebook to find pictures of FEMA’s snack packs. From the food items visible in the photographs, three of every four items in the snack packs exceeded the amounts of sodium, saturated fat or added sugars recommended by the US Department of Agriculture. Colón Ramos presented these findings at a forum about the effects of 2017’s hurricane season in Puerto Rico on Nov. 30 at Brooklyn College.

“The response was late and it was almost disrespectful to the people who received it,” Colón Ramos later told PRI. “It read as, ‘Don’t complain. This is what we are going to give you’ — this bunch of salt and sugar.” 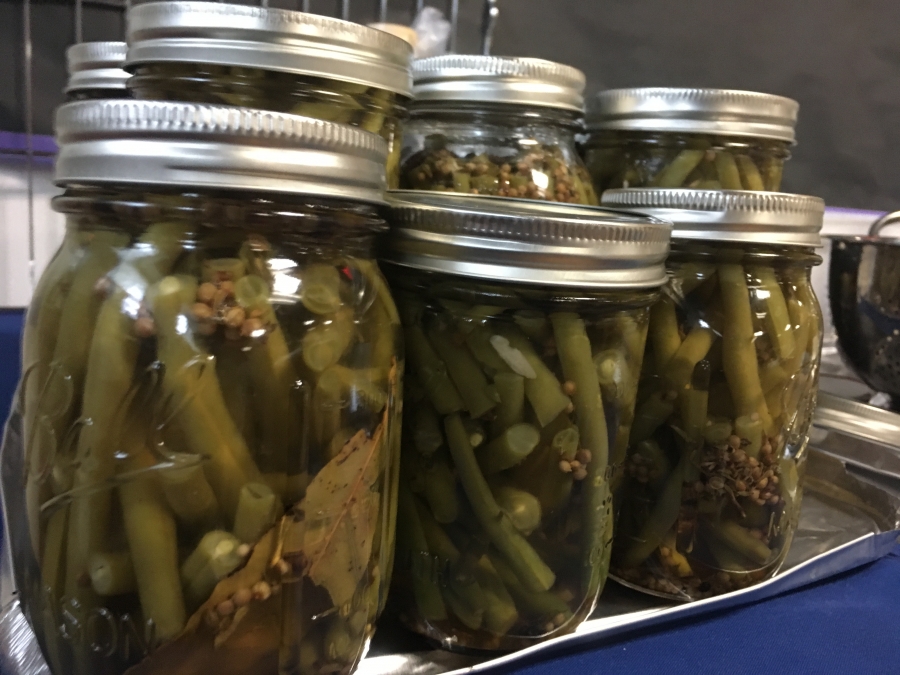 The Queer Kitchen Brigade sent just 400 jars of produce to Puerto Rico in December, 2017. It's a drop in the bucket of what was needed, but they are hoping to impact the kinds of food people in prolonged disaster relief can expect.

McCaskill, from the DLA, says she knows that some of their shelf-stable meals aren’t very healthy. This is by design, so that they can last.

“These are temporary type meals for a response to a disaster situation so people don’t go hungry,” she says. “It’s trying to get people food when all other options for food are not available.”

She also says the boxes containing junk food that Colón Ramos described do not sound like the meals their agency purchased for FEMA.

“There’s no way for me to verify that what those people are referring to has come from DLA because it doesn’t sound like it,” says McCaskill. “What I was able to verify is that FEMA had a lot of sources of the food they were using.”

FEMA did not respond to requests for a comment on Colón Ramos’ survey.

The Queer Kitchen Brigade says they will continue organizing canning events in New York City and other areas. They say they will also support other groups who want to start their own canning brigades and have discussions about food in times of disasters.

Llargues says FEMA will conduct an “after action report,” a routine process after every disaster to identify what the agency can do better when responding to catastrophes. FEMA will leave remaining food with the Puerto Rican government to distribute. The deputy director of public affairs said that the agency will also continue to provide food aid to organizations working on the island.

The commercial supply chain for food/water is available. However, @FEMA will continue to support needs that Puerto Rico identifies, & we're providing supplies to voluntary agencies/nonprofits for those in rural areas.

This story has been updated to reflect a change in FEMA's plans to end food aid to Puerto Rico.