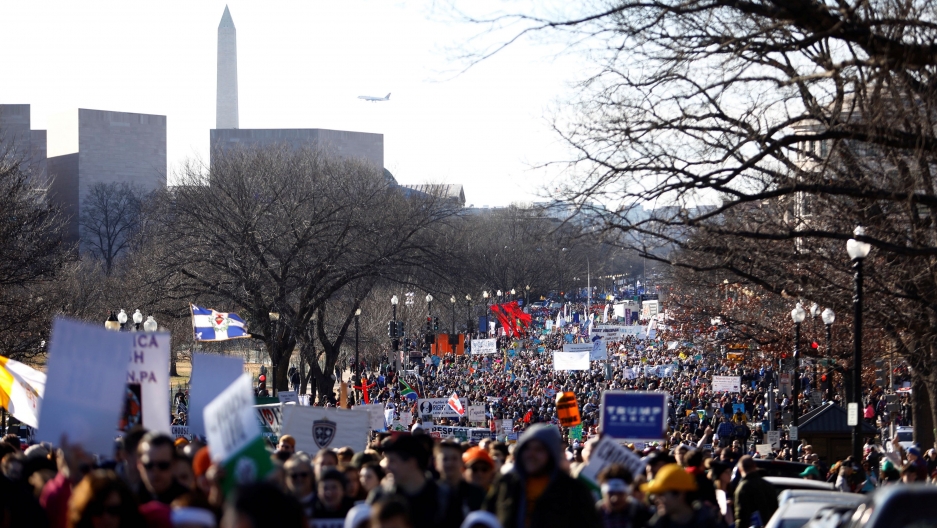 Activists participate in the annual March for Life in Washington, Jan. 19, 2018.

This week marks 45 years since the Supreme Court’s landmark decision in Roe v. Wade. For 33 of those 45 years, Clarke Forsythe has worked with Americans United for Life in the courts and state legislatures to restrict abortion — always with an eye on overturning Roe v. Wade.

He says it’s time to roll back abortion rights around the country, adding that the Supreme Court was “shooting from the hip” when it issued its 7-2 decision.

“The decision took the issue away from the American people and set us on a course of being 1 of 4 nations that allows abortion for any reason after fetal viability, ranked with China, North Korea and Canada,” he says. “We’re 1 of only 7 nations that allows for abortion for any reason after 20 weeks. It set us on an extreme course that is out of sync with public opinion, and the decision should be overturned and returned to the American people so the people can decide the issue, state by state.”

Related: For some Christians, being 'pro-life' isn’t just about being against abortion

Forsythe says that anti-abortion activists are looking for some key cases to challenge Roe at the highest levels of the American judicial system and could possibly use 20-week abortion bans, instead of a total ban, as the foundation for moving the issue through the courts.

“Any statute challenged in federal court or state court that arguably conflicts with Roe v. Wade or [the other landmark abortion case] Doe v. Bolton, could form a test case,” he says. “It could be a limit on public funding that supposedly conflicts with Roe; parental notice or consent law; informed consent law; clinic regulations — any of these could form a test case because in those cases, the court has to decide, ‘Are we going to apply Roe or are we going to apply the Constitution or some other standard?’”

Activists like Forsythe say access to abortion should be an issue left to the states. But pro-abortion rights advocates say that creating a patchwork map will create a two-tiered system: On the one hand, women with money will be able to travel to access safe and legal abortions, while low-income women with fewer options will be likelier to pursue dangerous and illegal avenues for the procedure.

If abortion were made illegal in certain areas, Forsythe says modern technological advances will drive women to avoid abortions, arguing that many will pursue multiple or more aggressive forms of contraception.

“Since abortion takes a human life — the life of a growing, developing human being — abortion shouldn’t be easy to obtain anyhow,” he says.

The United States was founded on a federalist system, Forsythe argues, so the Supreme Court should have left the issue up to the states instead of adopting one universal law about abortion.

“That’s the fallacy of Roe v. Wade,” he says. “The court, the judges from Washington, imposed one national rule on the country, and it’s precisely, I think, one reason why they failed because they attempted to do that.”