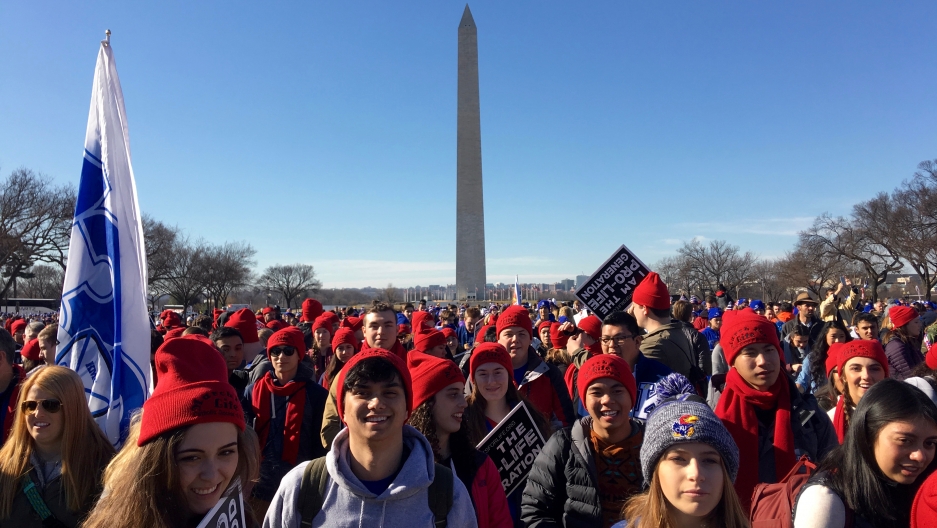 Catholic high school students from all over the country attended Friday's March for Life event in Washington, DC. This group from Kapaun Mt. Carmel Catholic High School in Wichita, Kansas, took buses to be there.

Donald Trump addressed the 45th March for Life in Washington last Friday via satellite. When his face appeared on the giant video screen on the National Mall, there was a hearty cheer from the crowd.

“He’s preaching love,” Betty Ryon from Maryland told me, holding onto a blue sign that read, “I vote pro-life.”

“I love that he loves life as much as the rest of us,” said Ryon, who is Catholic. If people think Trump is someone to be feared or that his rhetoric borders on racist, she says people need to reconsider.

“They need to read between the lines. The man is about love.”

“To be here today, with Donald Trump speaking, the president — all these marchers, all different colors, different races — that’s beautiful,” said Tony Menéndez. He’s a 56-year-old musician, born in Nicaragua, who’s been coming to this march for years.

Menéndez said that he voted for Trump, and overall, he thinks the president is doing a good job.

But some marchers expressed frustration. They welcome Trump’s position on abortion. But they are troubled by some of the president’s rhetoric and policy decisions.

“I’d call myself a conservative individual,” said Aubrey Pennington, an 18-year-old student at Kapaun Mt. Carmel Catholic High School in Wichita, Kansas. She sat through a 24-hour bus ride with her classmates to attend Friday’s march.

But Pennington said her own definition of being “pro-life” includes being “pro-immigrant.”

Among the homemade signs in the crowd was one with a purple elephant and a quote from a children’s book by Dr. Suess.

“A person’s a person, no matter how small,” it read.

Zulenka Quintanilla held that sign in one hand. And in her other hand, a sign read, “Overturn Roe v. Wade,” over an image of a beating heart.

Quintanilla also described herself as a conservative, and a Christian, with family from Bolivia. She said respecting all of human life means protecting the lives of immigrants, too.

“My grandma came here, brought my mom and aunt when they were young,” Quintanilla said. “It’s hard being conservative and being seen as someone who doesn’t support immigration. Or, because I’m a citizen, that it doesn’t affect me.”

“But of course it does. It’s people that come here for the American dream and a better way of life.”

Jenny Yang is a vice president at World Relief, a Christian nonprofit that helps refugees settle in the United States. She likes to tell her fellow Christians that respecting life also means being pro-refugee.

“We need to care about all of life from conception to the grave, from womb to tomb,” Yang said.

It’s right there in the Bible, she added.

“For evangelicals, if we are people who believe the truth about scripture and believe that truth should apply in all areas of our life, then you can’t separate out certain things that you think and pull them apart from the truth of the Gospel.”

When Yang heard about the vulgar comments attributed to President Trump last week describing Haiti and African countries, she said that she was not all that shocked at first. That’s because she has been keeping close tabs on the Trump administration’s policy moves on immigration.

And Yang is not impressed.

“They’re actually implementing policies in which they believe that people are coming from places that are irredeemable,” she said. “And that’s not been the history of immigration in our country.”

“We’ve accepted thousands of people who’ve been completely illiterate and desperately poor. That’s how our nation was founded, by people who were fleeing persecution. And they were people who were resilient.”

“It didn’t have anything to do with where they were coming from, their nationality, or the color of their skin,” Yang said.

But speaking up can be tough, said Russell Moore of the Ethics and Religious Liberty Commission, which describes itself as the policy arm of the Southern Baptist Convention.

Moore helped organize a conference ahead of this year’s march called, Evangelicals for Life. In one of his appearances on stage, he said it’s often risky for faithful Christians to raise unpopular ideas, going back to Biblical times.

But that doesn’t mean they should stay quiet, Moore said.

“If you stand up and say that the image of God also applies to this immigrant family that’s moved into your community, that people are screaming at and calling ‘anchor babies’ and “Go home!” it takes a good deal of courage to stand up and say, ‘I’m going to take the long-term [view] and not to follow whatever the mob is doing right now.’”

As another marcher at the Friday march put it, “Today, we’re marching for life. Tomorrow, we should march for ‘Dreamers,’” referring to the approximately 800,000 young people brought to the US illegally as children and now face possible deportation.