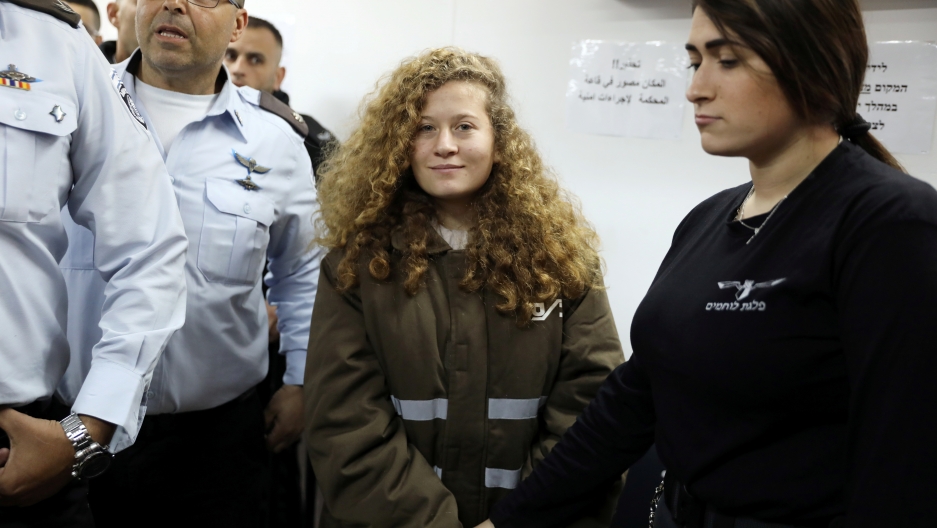 Ahed Tamimi, 16, will was ordered to be detained until Wednesday to allow the court time to decide whether she should be allowed out on bail ahead of her trial.

Prosecutors are seeking to have her kept in custody until her trial ends.

Tamimi's lawyer Gaby Lasky argued in court that her continued detention violates international conventions since she is a minor.

The teenager has been hailed as a hero by Palestinians who see her as bravely standing up to Israel's occupation of the West Bank.

Israelis accuse her family of using her as a pawn in staged provocations.

Tamimi has been charged with 12 counts including assault and could face a lengthy jail term if convicted.

The charges relate to events in the video and five other incidents. They include stone-throwing, incitement and making threats.

Her mother Nariman has also been arrested over the incident, as has her cousin Nour Tamimi, 20.

Nour Tamimi was released on bail on Jan. 5 while Nariman Tamimi remains in custody.

Ahed Tamimi's family says the Dec. 15 incident that led to the arrests occurred in the yard of their home in Nabi Saleh, near Ramallah in the West Bank.

Israel's military said the soldiers were in the area to prevent Palestinians from throwing stones at Israeli motorists.

The scuffle took place amid clashes and protests against US President Donald Trump's controversial recognition of Jerusalem as Israel's capital.

Related: Trump recognizes Jerusalem as Israel’s capital, but commits to peace in face of backlash

Relatives say that a member of the Tamimi family was wounded in the head by a rubber bullet fired during those protests.

Seventeen Palestinians have been killed since Trump's declaration on Dec. 6, most of them in clashes with Israeli forces. One Israeli has been shot dead since then.

Ahed Tamimi, arrested in the early hours of Dec. 19, has been involved in a series of previous incidents, with older pictures of her confronting soldiers widely published.

She has become something of an icon for Palestinians who have flooded social media with praise and support.

"Ahed Tamimi's ensuing arrest and military trial exposes the Israeli authorities' discriminatory treatment of Palestinian children who dare to stand up to ongoing, often brutal, repression by occupying forces," the London-based watchdog said in a statement.