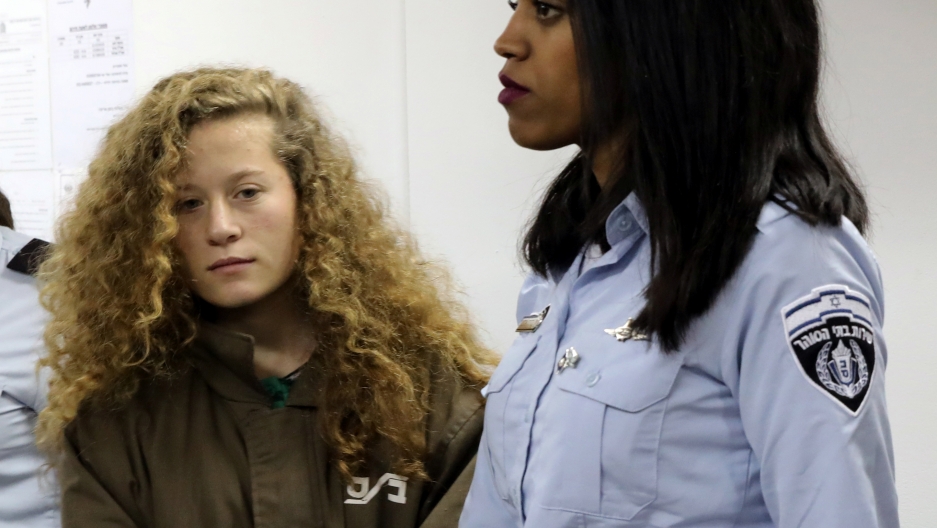 A 16-year-old Palestinian girl is looking at the possibility of a very long prison sentence in an Israeli jail.

But what sets Ahed Tamimi apart from hundreds of other Palestinian youth caught up in the Israeli military justice system is that people around the world might recognize her face and even know her name.

Ahed is from the West Bank village of Nabi Saleh. In mid-December, she appeared in a viral Facebook video that shows the blond-haired girl confronting two Israeli combat soldiers outside of her house. She gets in their faces, pushes them and tells them to leave. When one soldier tries to brush her off, Ahed repeatedly tries to kick and slap the soldier.

The standoff comes to an end after Ahed’s mother intervenes, but Nariman Tamimi herself is now facing charges of incitement for broadcasting the video. Ahed is facing 12 criminal charges, including assault and stone throwing.

But Ahed Tamimi has already achieved victory in one sense. She is being hailed by Palestinians and their supporters as a new symbol of resistance.

This was not the first time Ahed appeared in an online video that grabbed global attention.

In 2013, a much younger and smaller Ahed is shown in a video shaking her fist in the face of an Israeli soldier nearly twice her size. Another video, filmed in Nabi Saleh in 2015, shows Ahed, her brother and their parents in a tussle with a partially masked Israeli soldier.

The Tamimi family is quite well-known as Palestinian activists, but Ahed is now arguably the most widely recognized. She’s being compared to Malala Yousafzai and even Joan of Arc.

The weekly demonstrations in Nabi Saleh go back nearly a decade, starting with the dispute over access to a natural spring that sits near the Palestinian village and a nearby Jewish settlement.

Dozens of members of the Tamimi family have been jailed over the years, and at least two of them were killed in confrontations with Israeli soldiers. On the day that Ahed faced off with those two soldiers in December, her younger cousin Mohammad was shot in the head with a rubber bullet.

“We have no rights, including the right to protest peacefully,” writes Ahed’s father, Bassem Tamimi, in a recent op-ed. “The Israeli army meets our marches, which frequently include Israelis and internationals, with tear gas, stun grenades, ‘skunk water’ and rubber-coated steel bullets. Often, people are injured. Sometimes, they are killed.”

Bassem Tamimi wrote that he is proud of his daughter. At the same time, he wrote, seeing Ahed in a military court has been difficult. “As parents, we try to shelter our children against the occupation and all its violence, inequality and lack of freedom, but there is only so much we can do to protect them,” he said.

The Dec. 15 video of Ahed got a lot of attention inside Israel, too, where people looking at the same video saw very different things. Ahed’s Israeli lawyer, Gaby Lasky, said the video is making Israelis think again about its actions in the West Bank.

Lasky told the +972 news website that “everyone now has to deal with the occupation and what it does to the soldiers and to the people who live under occupation. Even without wanting to, Ahed’s case opened a door that has been closed for a long time for most of the public in Israel.”

But when Sharren Haskel sees viral videos like the ones put out by the Tamimi family, Haskel says she sees “a very difficult reality.”

“You need to understand the complexity,” says Haskel, who is a member of the Israeli Knesset with the right-wing Likud Party.

Haskel, who was born in Toronto and moved to Israel with her parents when she was an infant, says she remembers growing up in a country during the 1990s where, in many ways, Jews and Arabs managed to live side-by-side in peace.

But she says everything changed with the Oslo peace process and the Second Intifada of the early 2000s. At the time, Haskel served in the Israeli border police.

"I had to disperse violent demonstrations, really violent demonstrations,” Haskel says. “I had to go and do arrests of wanted people. Every single time you get intelligence about a suicide bombing attack, you have to open different checkpoints and make sure that this person that we're looking for will not reach [his] destination. Because if they reach their destinations, many people will die.”

Haskel says her experience in uniform helped her “sober up” and move past “the dreams and illusions” in which she once believed.

Haskel says she understands people around the world will see the video of Ahed as a brave teenager standing up to oppression, and they will call her a hero. But Haskel says her empathy lies with the Israeli soldiers in videos like that one.