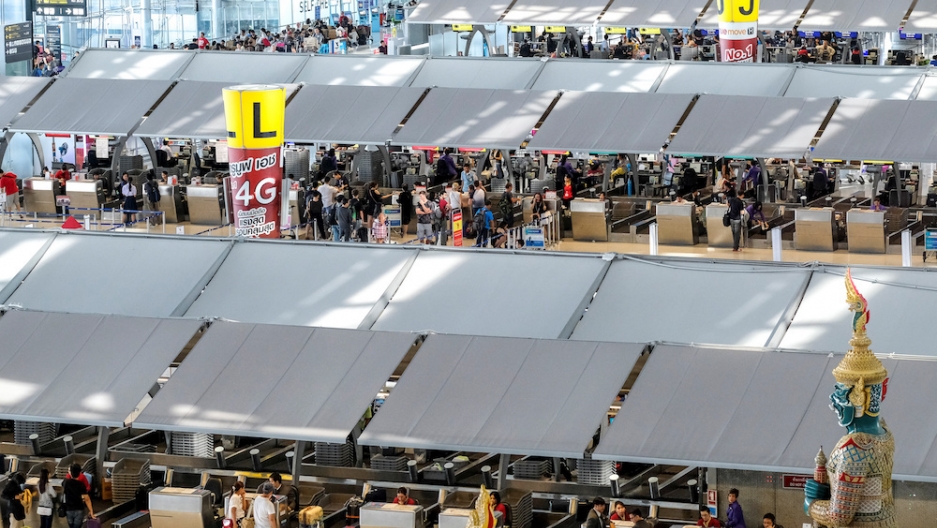 Tourists queue to check in at Suvarnabhumi International Airport in Bangkok, Thailand, December 23, 2016.

A Zimbabwean family has been marooned at Bangkok's main airport for two months, Thai immigration police said Thursday, an ordeal over the holiday season that has drawn widespread sympathy among Thais.

The family, four adults and four children — who are aged between two and 11-years-old — have tried to leave Thailand since late October.

But they lack visas for onward travel, refuse to return to Zimbabwe and are denied re-entry to the kingdom after overstaying, trapping them in limbo in the airside area of the airport.

Their predicament first emerged after a Thai Facebook user posted a photo of himself giving one of the children a Christmas present.

The post, which explained their predicament, went viral as questions emerged as to how they had lived at the airport for so long.

Comparisons were quickly made with the 2004 film "The Terminal," in which a man played by Tom Hanks finds himself stuck in a New York airport after his government collapses, rendering his papers useless.

Immigration police said the family entered Thailand in May on tourist visas.

On October 23 they tried to fly to Spain via Ukraine, but were denied by the airline as they lacked Spanish visas.

As they had overstayed their Thai visas by several months they were banned from re-entering the country.

They are trapped as they have also "refused to return to Zimbabwe citing their fear for their for their safety due to unrest in Zimbabwe," the official said, requesting anonymity.

Airlines have been providing them with food.

Zimbabwe's military pushed out 93-year-old despot Robert Mugabe in November paving the way for a transition from decades of mismanagement and authoritarian rule.

But there has been little unrest and the new president has encouraged Zimbabweans who fled under Mugabe's rule to return home.

The family have applied for asylum hoping to be resettled outside of Thailand, which does not formally accept refugees.

Vivian Tan, a spokeswoman for the UN refugee agency in Bangkok said the UNHCR was "currently exploring potential solutions" for the family but could not provide more details for confidentiality reasons.

With visa-on-arrival agreements with many countries, Thailand has long been a destination for those fleeing civil strife and poverty.

But it does not allow refugees to legally settle in the kingdom, meaning those seeking asylum need to a find a third country option.