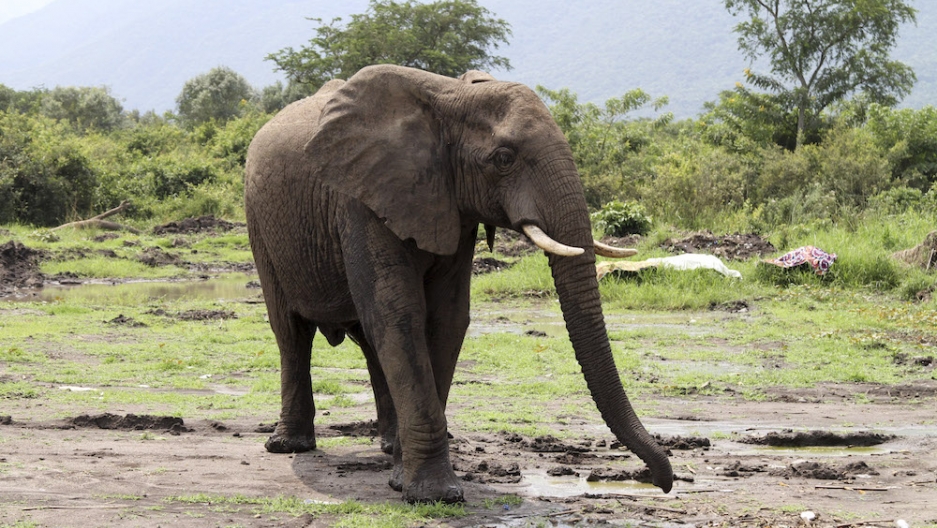 An elephant is pictured in Virunga National Park near Lake Edward at Mabenga in the eastern Democratic Republic of the Congo, January 10, 2014.

The threat comes from "highly organized armed groups who are linked to human rights violations and ongoing political instability" as well as state actors, armed pastoralists and poachers, Traffic said in a report.

Joseph Kony, a self-styled mystic and prophet who launched a bloody rebellion three decades ago, "tasked a group of LRA fighters with obtaining 100 tusks... over the course of nine months" from the Garamba natural reserve in Democratic Republic of Congo, Traffic said.

The report also tracked poaching in Bili in DRC and the Chinko reserve in Central African Republic. The research covered nearly 90 villages in the region.

"This region is perhaps the most remote and underdeveloped on the continent," said Liz Williamson, one of the authors of the report.

"The lack of governance and enforcement has rendered local communities and wildlife an easy target for exploitation by armed groups, while illegal wildlife trade fuels continued instability across the landscape."

Exacerbating the problem was endemic corruption in a region mired in poverty, but things were improving in DRC where poaching by government soldiers has been declining in the past few years due to "stronger collaboration with park enforcement authorities," it said.

But animals are also under threat from pastoralists like the Fulani, who are spread over a swath of western and central Africa, and the Mbororo, a Fulani sub-group which kill Giant Eland — a Savannah antelope — and buffaloes "to sell as bushmeat and to poison predators.

"Fulani have also been reported as trafficking wildlife products such as ivory and leopard skins across borders, primarily to South Sudan and Uganda," Traffic said.

And there were armed "poachers targeting large mammals, including bongo, buffalo, elephant and hippopotamus in the protected areas" selling their meat to individuals and restaurants and transporting high-value products such as ivory, skins and other trophies further afield.

"Hunting serves as an income-generator for people living around protected areas and about 20 percent of men in northeast DRC reported that they engage in small-scale poaching," it said.

The International Union for Conservation of Nature (IUCN) has previously found that Africa's elephant numbers fell by 111,000 between 2006 and 2015.

The Convention on International Trade in Endangered Species said the elephant population in southern Africa and much of East Africa is now either stable or increasing but illegal killings remain high across the continent.