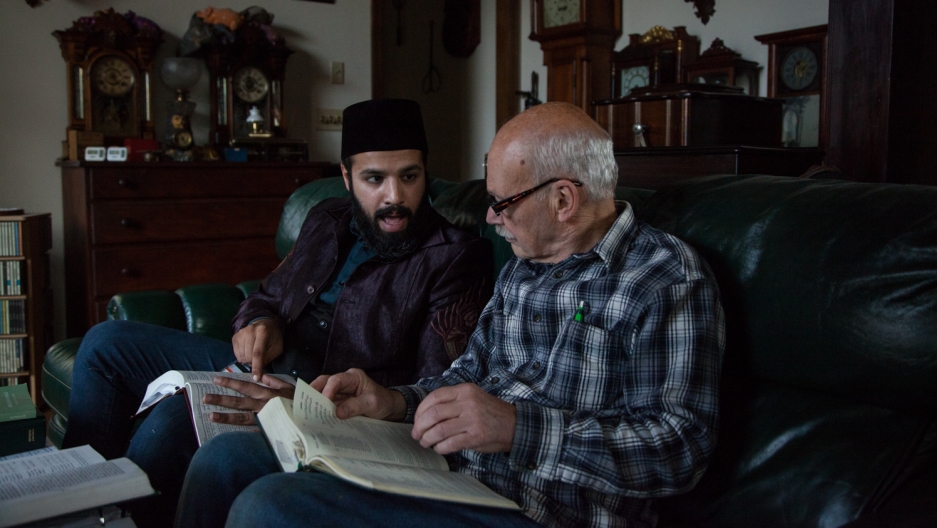 Zahir Mannan and Tom Grimshaw debate Islamic texts. They met after 9/11, at one of the Baitul Aman Mosque’s weekly open houses.

The night of Nov. 14, 2015, was not the first time Ted Hakey, 50, went into his backyard in Meriden, Connecticut, and fired guns to let off some steam. It was the night after a deadly terror attack in Paris, and Hakey was furious.

So he shot his Springfield Armory M1A .308-caliber rifle into the air. Some of those shots hit the Baitul Aman Mosque next door. Luckily, no one was in the building at the time.

“I wanted to scare ’em, but the shots that hit were never supposed to hit,” says Hakey, who admits he harbored significant hate for Muslims back then. His Facebook posts reflect that well enough. 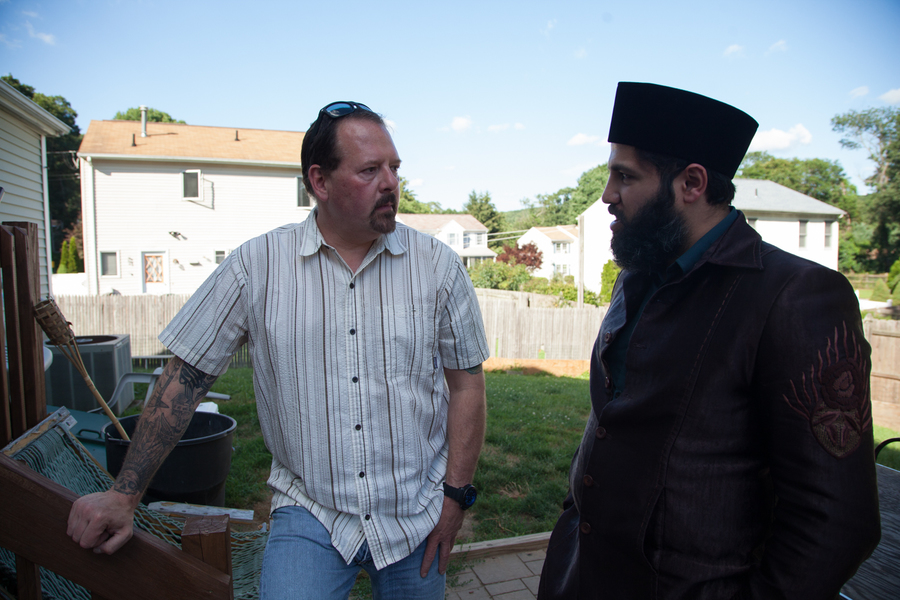 Ted Hakey (left) fired shots that hit a mosque next door to his house in Meriden, Connecticut in 2015. Two years later, he says that meeting Zahir Mannan, a mosque leader changed things. “The amazing part is how as soon as I met Zahir — within five minutes… when I did my apology, [my hate] was gone,” Hakey says.

Prosecutors used some of those posts to build their case against him. The shooting got him six months in jail on federal hate crime charges, but leaders of the mosque argued he should be forgiven and not even serve jail time. Dr. Mohammed Qureshi, the mosque president, expressed this feeling to the judge at Hakey’s sentencing.

For 29-year-old Zahir Mannan, the criminal case was an opportunity to show Hakey and anyone else paying attention — which by then included the national media — what Islam is really about.

Mannan is the director of outreach for the mosque, which is part of a sect of Islam called Ahmadiyya. Their belief that a 19th-century Indian religious leader named Mirza Ghulam Ahmad was the latest prophet after Muhammad, and the savior, is seen by some conservative Muslims as heretical. So Mannan shrugs off the Connecticut attack. It’s hardly anything compared to what other of his faith encounter all over the world.

The backlash has included the 2010 attacks on two Ahmadiyya mosques in Pakistan that left over 90 people dead, as well as the recent murder of a shopkeeper in the United Kingdom. “Kill Ahmadi” leaflets were found in a London mosque that same year. 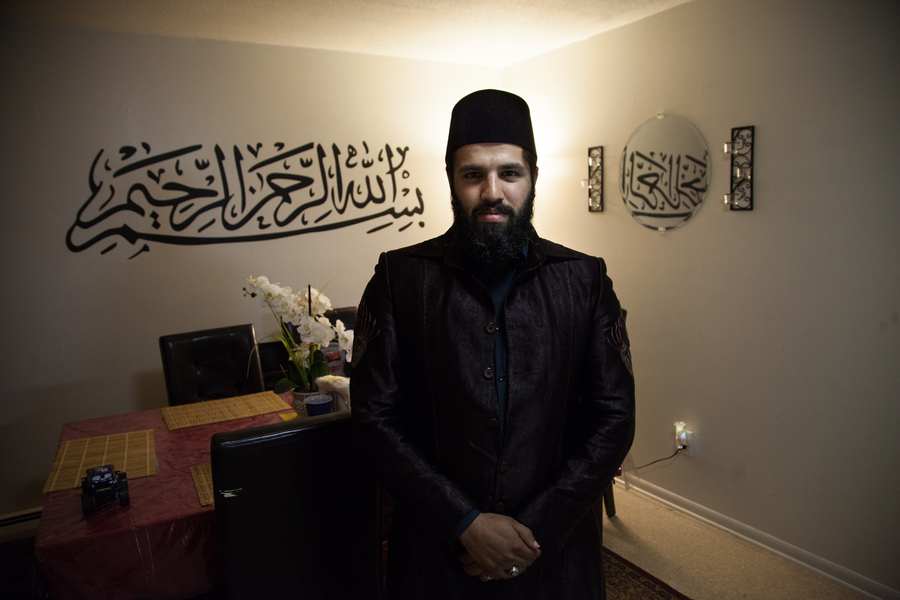 Zahir Mannan, 29, is the director of outreach at the Baitul Aman Mosque in Meriden, Connecticut. “If someone wants to be critical of Islam, and they go to the sources and don’t look at the action of modern-day Muslims, then I’ll engage in a dialogue with them,” he says.

Such persecution has made Mannan especially convinced that hardline fanatics are antithetical to Islam, rather than representative of it — and he is committed to showing that to people like Hakey.

In Meriden, a town of nearly 60,000 people, some local Muslim leaders, and even some members of the Ahmadiyya mosque, called for Hakey to get a harsher sentence. Mannan met with prosecutors to ask for leniency. He also met with Hakey in prison almost every week during his six-month sentence.

“One of the things about hate is it’s a slow progression that you don’t even realize, you don’t even know it,” says Hakey. If the people of the Baitul Aman Mosque didn’t forgive Harkey, that “hatred never would have been erased.”

But for Mannan, the mission to show the true nature of Islam started long before bullets hit the mosque. And in that quest, Mannan found an unlikely companion: a local 76-year-old named Tom Grimshaw, who is convinced organizations like the Muslim Brotherhood are plotting to impose Sharia, Islamic law, on all of America.

Grimshaw is a retired hospital administrator and an outspoken supporter of President Donald Trump. He sees most Muslims as a threat to the US, but he has chosen to respond with books instead of bullets. The Sept. 11 attack sparked his interest in whether Islam is violent, and the mild-mannered antique clock collector began to read the Quran, Hadith and Sirah, Muhammad's biography, along with academic books on Islamic history. He even taught an adult education course on Islam at the University of Connecticut.

In 2010, Grimshaw began to compile his research into a book of his own. He says coverage of Islam in the media is shallow, and he wanted his book to dispassionately and unreservedly cut to the heart of the issue: Is Islam inherently violent?

His initial findings were this: There is an entirely plausible and valid interpretation of the Quran and Hadith that sanctions violence when it comes to propagating Islam and subjecting other faiths. Many, if not most Muslims do not adhere to this version of the faith, but Grimshaw maintains that the percent of those who do is far from negligible.

But he knew that, eventually, he would have to vet his own findings by presenting them to actual Muslims. In January 2017, he attended a series of “Honest Conversations with Muslim Neighbors” events, hosted all over the state by the Connecticut Council for Interreligious Understanding.

“What I found was inconsistency in some of the presentations,” Grimshaw says. He says he asked Muslim speakers to help him vet his research. “Every time I did that, I got a warm welcome at the meeting and then — I don’t like to put it this way, but it looked like to me that when they found out what I knew, they didn’t want to engage and I would never get invited back.”

Grimshaw’s search eventually brought him to the doorstep of the Baitul Aman Mosque during one of their weekly Friday “Coffee Cake and True Islam” open house nights he guesses around the end of 2013. That’s where he met Mannan.

The first few meetings were friendly enough, but there was still apprehension on both sides that prevented open dialogue. Mannan suspected Grimshaw of being another “anti-Sharia” campaigner, noting his loose connection to groups like Act for America, a grassroots nonprofit organization focused on “confronting terrorism” and “securing the border,” which some people consider an anti-Muslim hate group.

“And I was leery because I had not heard of the Ahmadis previous to this encounter,” says Grimshaw. “And I didn’t know if they were like most of the other Muslims I’d encountered in Connecticut.”

After six or seven meetings, though, Grimshaw’s relationship with Mannan and the Ahmadi community in Meriden, Connecticut, reached what he describes as a “watershed moment.” It came during an open house when the mosque’s president, Dr. Mohammed Qureshi, bluntly asked him what he wanted.

Grimshaw explained that he was looking for a chance to finally test the view he had formed of Islam — and to have that view challenged by well-educated Muslims.

In Mannan, Grimshaw found a formidable sparring partner — someone who was equally disappointed with the “Honest Conversations’” lack of openness and who was similarly seeking unrestrained debate based on the religious texts.

“If someone wants to be critical of Islam, and they go to the sources and don’t look at the action of modern-day Muslims, then I’ll engage in a dialogue with them,” Mannan says.

A research biologist by training, Mannan is careful to draw conclusions based on evidence instead of opinion. And he’s confident that the sources, properly interpreted, show that Islam encourages the kind of compassion he showed Ted Hakey rather than the brutality of ISIS.

So now, Grimshaw and Mannan are writing the book together. The idea is to lay all the cards on the table and address some of the issues that people may be uncomfortable talking about, like jihad, slavery and misogyny in Islam, exploring to what extent they are justified by the holy texts.

The book is set up as a kind of Socratic debate, with Grimshaw taking the position that the texts of Islam promote intolerance and extremism, while Mannan argues that Islam is a religion of peace and tolerance.

The two regularly meet at the mosque or each other’s homes, sometimes debating for hours at a time, to advance the manuscript. They pore over every detail, from the meaning of a Quranic verse to different translations of a single Arabic word.

Neither is sure how or when the book might be published, but at this stage, what’s important is that they got the conversation going. They’re hoping that their example will show that people can discuss and even disagree on these issues in a rational way, without falling into enmity.

Now, Grimshaw’s friendship with the local Ahmadiyya community has grown to the point that he attended their annual conference in Pennsylvania this year.

“I had never been treated so well in any organization in my life,” he says.

That hasn’t necessarily changed his view on Islam — “You can come out with that final view that Muhammad, peace be upon him, was a fundamentalist and he meant to conquer the entire world and convert everyone to Islam. There is that viewpoint, and it is a logical viewpoint.” But he readily admits that the Ahmadiyya are among many Muslims who intuitively interpret the religion in a totally peaceful way.

“That’s why we’re trying to define the Islam of Prophet Muhammad versus the Islam of the modern-day Muslims,” says Mannan. “It’s not the religion of Islam that needs reform, it’s our misunderstanding.”

As for Hakey, Grimshaw jokes that he is lucky he “shot at the most tolerant mosque in Connecticut.”

“The amazing part is how as soon as I met Zahir — within five minutes ... when I did my apology, [my hate] was gone. Previous to that if I was walking down the street and I see Muslim people walking, I had that hate in my heart. After five minutes, it was erased, it was gone,” Hakey says. "That’s the strangest part that I can’t figure out, how much hatred was there and how quickly it was gone."

Matthew Bell contributed to this report.

Next: His brother was murdered for wearing a turban after 9/11. 15 years later, he spoke to the killer.