Valarie Kaur asked Rana, “If you had a chance to talk to Frank Roque, in the spirit of reconciliation, would you?” He replied: “Yes, I would.”

On September 15, at sunset in Arizona, a crowd gathered at the corner of a Chevron gas station called the Mesa Star. Like every year since 2002, Rana Sodhi hosted a memorial here for his brother, Balbir Singh Sodhi. Balbir was shot while planting flowers in front of his store on September 15, 2001 — four days after the 9/11 attacks.

On this night every year, the station is transformed into sacred space, where we listen to prayers, hold candles and place red roses on the cool marble where Balbir died. I took my seat on the ground next to his widow, family and neighbors on white sheets spread over the concrete, lit by the flood lights attached to the gas pumps behind us.

Sodhi was the first of dozens of people killed in hate crimes against Sikhs and Muslims after 9/11. His murder turned a generation of young people like me into activists. I made a film about Balbir’s murder and began a life helping communities organize against racism and violence. Over the years, these memorials blur together.

“It feels like nothing has changed,” Rana told me. The cycle of violence feels endless: an act of terrorism followed by a wave of hate violence, profiling, surveillance, detentions, deportations, bigoted rhetoric and use of force abroad. Then followed by another terrorist attack and more hate and violence.

So that night a little over a week ago, Rana and I did something that was previously unthinkable: We decided to call his brother’s murderer.

Frank Roque is in an Arizona prison a few miles from the Mesa Star, serving out a life sentence. We did not know anything about his mental state or whether he had any remorse for what he'd done. We only knew what came out in his trial.

On September 11, 2001, Roque told a waiter at Applebee’s: “I’m going to go out and shoot some towel heads,” and “We should kill their children, too, because they’ll grow up to be like their parents.”

Four days later, he drove up to the station where Balbir was planting crates of flowers in front of his store. Roque shot him five times in the back before continuing his shooting rampage at another gas station, where his bullet narrowly missed a Lebanese American clerk. He then drove to his previous home, which had been sold to an Arab family, and fired shots several times.

When police arrested him the next day, he yelled, “I am a patriot!” and “I stand for America!” He was sentenced to death — a sentence that was later reduced to life in prison. He told the court then that voices told him to “kill the devils.”

A few months later, Rana’s other older brother, Sukhpal, was shot and killed in a separate crime while driving his cab in San Francisco. Rana has been telling his brothers’ stories for the last 15 years. He has gone everywhere he can — school auditoriums, interfaith conferences and churches — calling on Americans to combat hate with love. Since 9/11, Sikh and Muslim American activists have amplified this message, made films, published books, marched in the street, filed lawsuits, created organizations, and launched justice campaigns. But 15 years of activism has not made our communities safer.

I asked Rana, “If you had a chance to talk to Frank Roque, in the spirit of reconciliation, would you?”

So the morning after the memorial, we huddled together around my cell phone, and called Roque. It was the one thing we had not yet done. To test our own ability to love, even someone who hurt us. At first, I thought it was a disaster.

I introduced myself and Rana and asked Roque why he agreed to speak to us. He said he had always told the truth: that the 9/11 attacks broke him down as a man and resulted in a mental breakdown. He did not act out of his own free will, he repeated. He lost his job and wife and was sorry for “what happened.”

He spoke in passive voice, and all I could hear was a man who refused to take responsibility for murdering another person. When I pressed him, he said that he was sorry for what happened to Balbir, and that we must also be sorry for the thousands who died on 9/11.

I began to think that calling him was a mistake.

Then Rana, who had been listening, began to speak calmly: “Frank, I’m so thankful for what you say. This is the first time I’m hearing from you that you feel sorry.”

Rana told him that a few years ago, he recognized Roque’s daughter and wife at Costco while buying flowers for his brother’s memorial and invited them to dinner. Frank remembered his daughter telling him the story and was deeply moved that Rana showed compassion to his daughter. That’s when the conversation shifted and opened up.

“We already forgave you,” Rana replied. He had never wanted Roque put to death, because it foreclosed the possibility of remorse.

“If I had the power to take you out from prison, I would do it right now,” Rana said. “If one day you come out, we can both go to the world and tell the story.”

Roque responded, “I know I can’t give you back what I wish I could, which is your brother, but I hope you find some comfort in knowing that I’m very sorry for what happened to your brother and your whole family and his wife and everyone.”

They agreed to speak again.

At the end of the call, Rana sat in silence for a few minutes. He had spent so many years traveling the country with a message of love and compassion. But he had never before faced his brother’s murderer, heard remorse and forgiven him. We looked at each other, amazed.

And yet, we were also left unsatisfied.

True reconciliation requires accountability, and Roque insisted that he did not kill intentionally. He could not talk about the murder without also talking about the damage it caused him and his family.

There are many questions left: Why did Roque choose Balbir Sodhi? Does he grasp the full extent of the pain and grief he caused the Sodhi family and the Sikh community? Will forgiveness lead us toward justice?

While I heard both sides reaching for reconciliation, the moment itself eluded us. The meeting was not an end but a beginning: It opens the door to reconciliation, and a new chapter in our story. 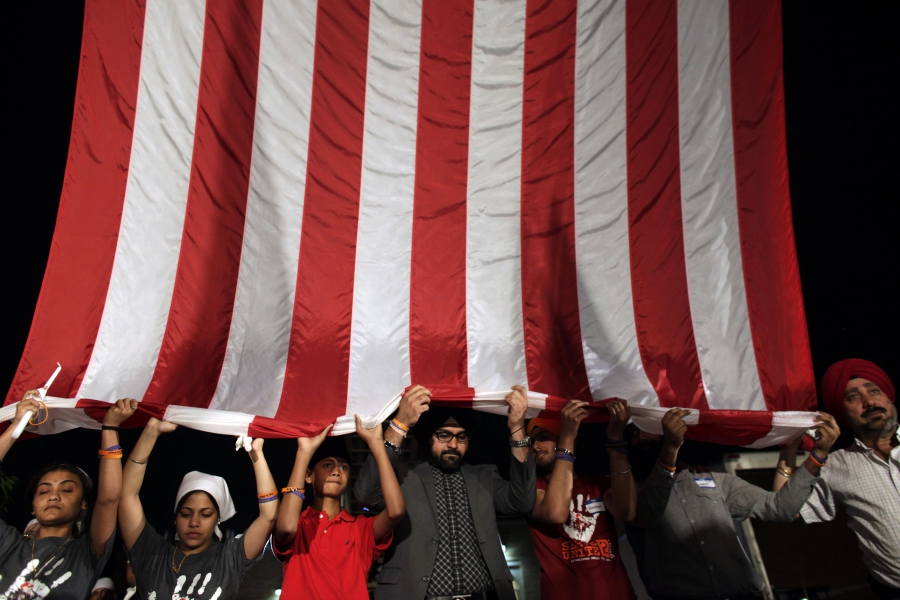 Family members of those killed hold a American flag as mourners attend a candlelight vigil on the one-year anniversary of a mass shooting at the Sikh Temple of Wisconsin, in Oak Creek, Wisconsin August 5, 2013. Gunman Wade Michael Page killed six members of the Sikh temple in 2012 before shooting himself.

The Sunday after the 2012 mass shooting in Oak Creek, Wisconsin, Sikhs prayed for the soul of the gunman. Last year, Christian families forgave Dylann Roof, who murdered their loved ones in a historic black church in Charleston. And this year, Rana offered forgiveness directly to the man who killed his brother.

In an era when our nation is gripped by cycles of violence, these stories may offer a way forward.

On the night of Balbir’s memorial, a Navajo family spontaneously performed a water prayer. They poured water into the ground beneath a plant at the site of Balbir’s death, so that our prayers for revolutionary love would flow down into the soil, through the roots and spread all over the Earth.

Rana and I will continue to talk to Roque. And I hope we too will find truth and reconciliation that can spread around the world.

Valarie Kaur and Rana Sodhi will be sharing this story as part of the in the "Together Tour" in October in Los Angeles and Denver. Find out more here. And to learn more about "revolutionary love" and see Valarie's film, visit the Revolutionary Love Project.