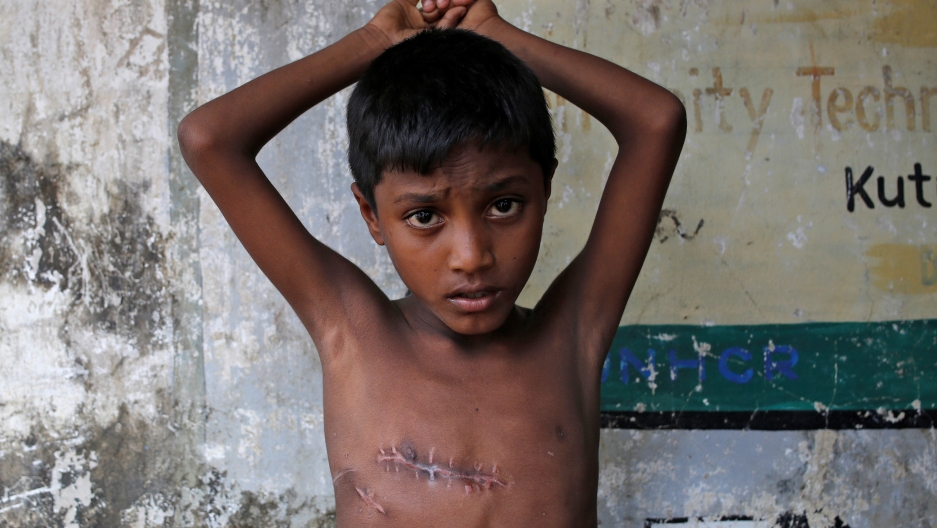 Mohammed Shoaib, 7, who was shot on his chest before crossing the border from Myanmar in August, shows his injury outside a medical center after seeing a doctor, at Kutupalong refugee camp near Cox’s Bazar, Bangladesh, Nov. 5, 2017.

Bangladesh and Myanmar will start repatriating refugees in two months, Dhaka said Thursday, as global pressure mounts over a crisis that has forced more than 600,000 Rohingya to flee across the border.

The United Nations says 620,000 Rohingya have arrived in Bangladesh since August to form the world's largest refugee camp after a military crackdown in Myanmar that Washington has said clearly constitutes "ethnic cleansing."

The statement from Secretary of State Rex Tillerson is the strongest US condemnation yet of the crackdown, accusing Myanmar's security forces of perpetrating "horrendous atrocities" against the group. 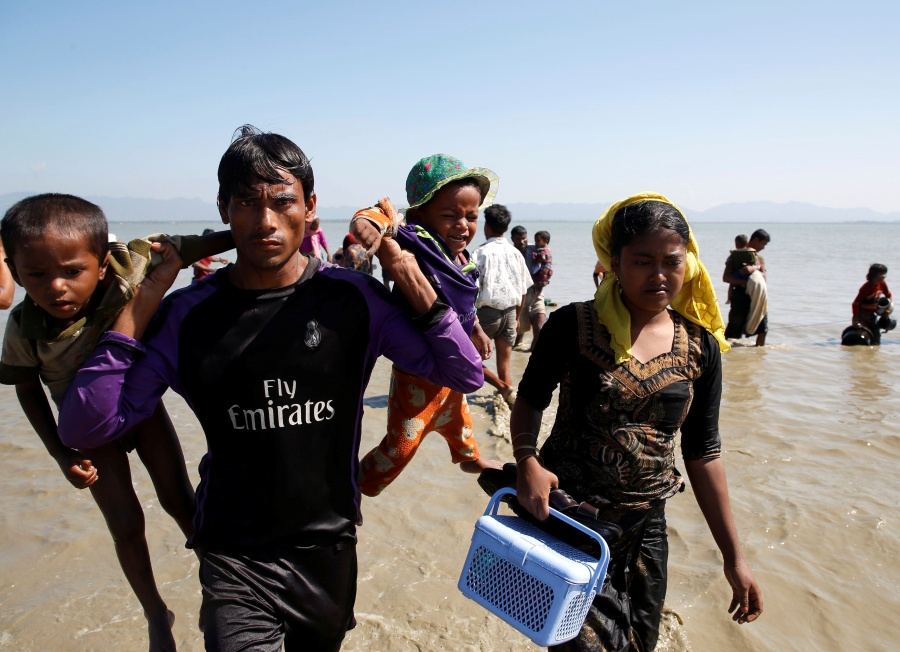 A Rohingya refugee man holding children walks towards the shore as they arrive on a makeshift boat after crossing the Bangladesh-Myanmar border, at Shah Porir Dwip near Cox's Bazar, Bangladesh, Nov. 9, 2017.

In a brief statement, Bangladesh said it had agreed to start returning the refugees to mainly Buddhist Myanmar in two months.

It said that a working group would be set up within three weeks to agree to the arrangements for the repatriation.

"This is a primary step. [They] will take back [Rohingya]. Now we have to start working," Ali told reporters in Naypyidaw.

Impoverished and overcrowded, Bangladesh won international praise for allowing the refugees into the country, but has imposed restrictions on their movements and said it does not want them to stay.

Suu Kyi's office called Thursday's agreement a "win-win situation for both countries," saying the issue should be "resolved amicably through bilateral negotiations."

However, it remains unclear how many Rohingya will be allowed back and how long the process will take.

Shelley Thakral, a UN World Food Program spokesperson is based in the port town of Cox's Bazar, Bangladesh, where a mega-camp of hundreds of thousands of Rohingya refugees has sprung up.

Tourists once flocked to Cox's Bazar to relax on what some consider the world's longest beach. But an hour's drive from the coast, the refugees squeeze together in densely packed settlements.  More desperate Rohingya, sometimes dozens, sometimes hundreds, arrive every day.

Aid groups say it's a struggle just to provide basic essentials in the mega-camp. One in four children there suffer from malnutrition, according to the WFP.  It offers as many families as possible shelter and hot meals.

"We're trying to make sure whatever trauma that they've encountered that they have something to settle into that's dignified, that that makes them feel welcome and makes them feel that they are being looked after," Thakral says.

Rights groups have raised concerns about the process, including where the refugees will be resettled after hundreds of their villages were razed, and how their safety will be ensured in a country where anti-Muslim sentiment is surging.

“The most important thing that would have to be addressed is that those returning would have to have some ability to move within [Myanmar’s] Rakhine State and they would need to have their basic needs met,” said Carolyn Miles, president and CEO of Save the Children, one of several aid organizations working with Rohingya refugees in Bangladesh

But Miles says she’s skeptical the agreement will address those challenges.

“I don’t know that this agreement is actually gviing them either the rights of movement or that the conditions are going to be much better than what they fled,” Miles said. “I think it’s unlikely you’ll have a lot of people — given what they went through when they were in Myanmar — choosing ... to return.” 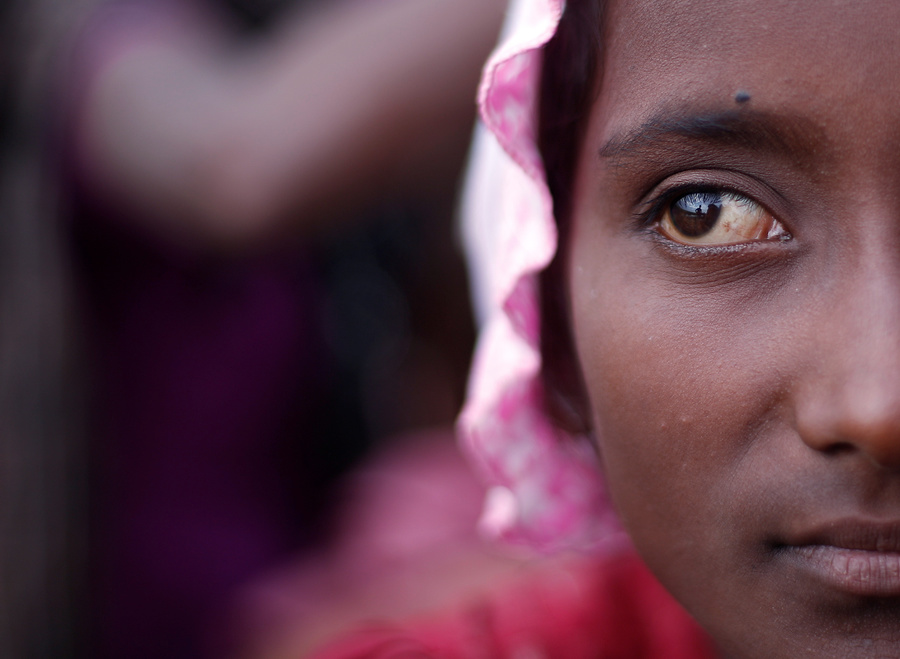 A Rohingya refugee girl waits to be taken to a refugee camp after crossing the Naf river at the Bangladesh-Myanmar border in Palang Khali, near Cox’s Bazar, Bangladesh Nov. 2, 2017.
Credit:

The stateless Rohingya have been the target of communal violence and vicious anti-Muslim sentiment in mainly Buddhist Myanmar for years.

They have also been systematically oppressed by the government, which stripped them of their citizenship and severely restricted their movement, as well as their access to basic services.

Tensions erupted into bouts of bloodshed in 2012 that pushed more than 100,000 Rohingya into grim displacement camps.

Despite the squalid conditions in the overcrowded camps in Bangladesh, many of the refugees say they are reluctant to return to Myanmar unless they are granted full citizenship.

"With full rights like any other Myanmar nationals," said Abdur Rahim, 52, who was a teacher at a government-run school in Buthidaung in Rakhine state before fleeing across the border. 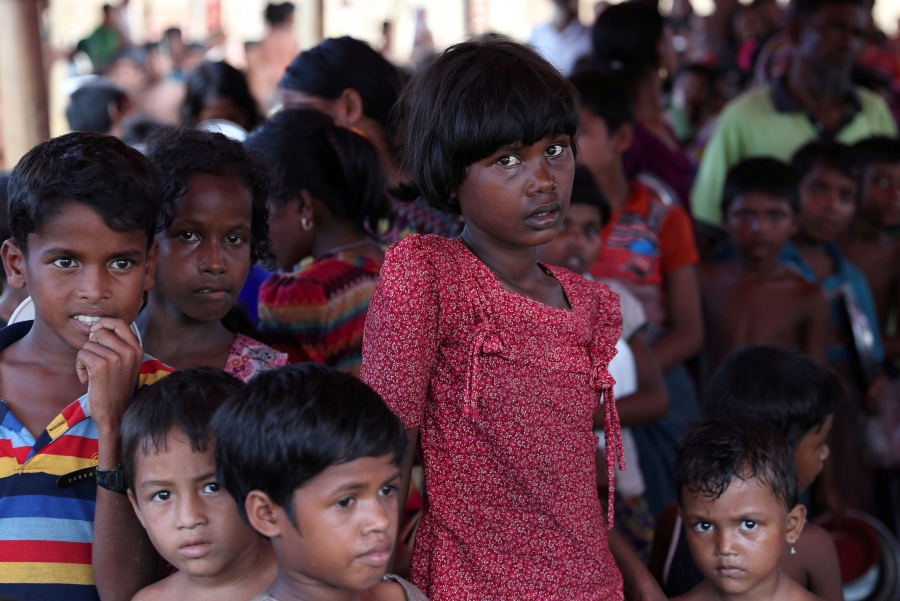 "We won't return to any refugee camps in Rakhine," he told AFP in Bangladesh.

The signing of the deal came ahead of a highly-anticipated visit to both nations from Pope Francis, who has been outspoken about his sympathy for the plight of the Rohingya.

The military denies all allegations but has restricted access to the conflict zone.