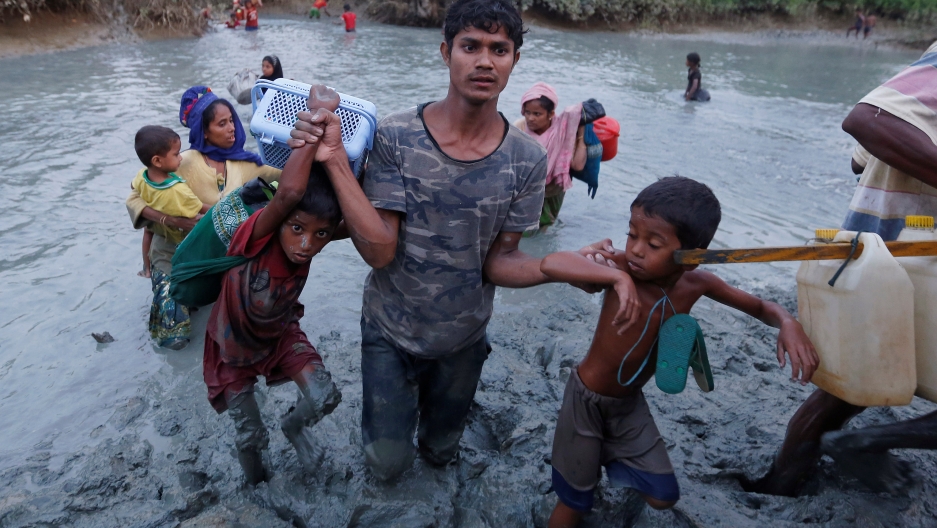 A Rohingya refugee helps children cross the mud after crossing the Naf River at the Bangladesh-Myanmar border.

When lawyers from Google, Facebook and Twitter gathered on Capitol Hill Tuesday afternoon for oversight hearings, most of the questions were about the Russian use of misinformation to influence the 2016 presidential elections in the United States.

But misinformation can cost more than votes. It can cost lives.

In Myanmar, human rights groups say false information and hate speech spread on Facebook are stoking violence against the Rohingya ethnic group. The brutal crackdown on the Rohingya minority by the military and ultranationalist groups in the Rakhine state has caused more than 600,000 refugees to flee to Bangladesh.

"The entire internet is Facebook and Facebook is the internet. Most people don't necessarily know how to operate or get on and navigate regular websites. They live, eat, sleep and breathe Facebook." Facebook users in Myanmar grew from about 2 million in 2014 to more than 30 million today.

Which is why the misinformation spread on Facebook can be so dangerous.

Moyer says Facebook has become a breeding ground for pernicious posts about the Rohingya. "In particular, the ones that seem most problematic are government channels that have put a lot of propaganda out there, saying everything from the Rohingya are burning their own villages, to showing bodies of soldiers who may be from other conflicts but saying this is the result of a Rohingya attack, to more nuanced stuff like calling the Rohingya 'Bengalis' and saying they don't belong in the country."

These posts are widely shared and generate thousands of likes.

At the hearing, Facebook came under pressure to do more to monitor and remove the posts. But Moyer says, it's complicated.

"This is a company that largely employs English speakers in America," he says. "The idea that they're going to be parsing Burmese and be able to surf the cultural currents to understand what is hate speech and what isn't, and what is real and what's not, stretches belief."

To hear more from Paul Moyer on the Rohingya crisis, listen above.