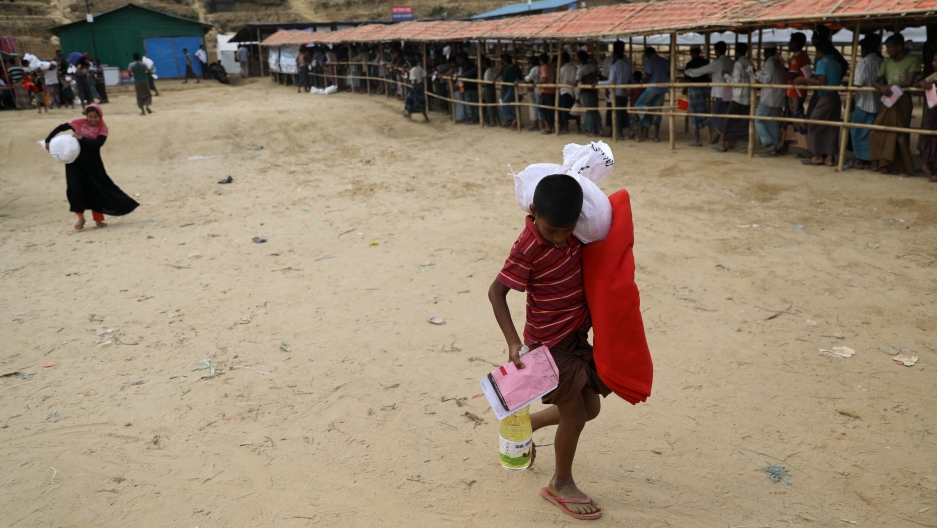 China has offered to help defuse the Rohingya crisis, Bangladesh said Saturday, following meetings with Beijing's top diplomat that Dhaka hopes will apply pressure on Myanmar take back hundreds of thousands of refugees.

More than 600,000 Rohingya are languishing in Bangladeshi refugee camps after fleeing a brutal Myanmar army campaign launched in late August.

The UN says the scorched-earth operation, which has left hundreds of villages burned to ash in northern Rakhine state, amounts to ethnic cleansing.

Bangladesh, which already hosted some 250,000 Rohingya before the current exodus, wants the latest arrivals to return swiftly and is keen to enlist help from China, a staunch ally of Myanmar.

Foreign Minister A. H. Mahmood Ali held talks in Dhaka on Saturday with his Chinese counterpart, Wang Yi, over the issue.

"When the issue of exodus of displaced Myanmar nationals was raised, the Chinese Foreign Minister stated that as a friend China will help resolve the issue and will not be partial to any side," the Bangladesh foreign ministry said in a statement after the talks.

The statement added that Wang stressed the "importance of continued consultations and dialogue between Bangladesh and Myanmar on the issue."

No details were given on what concrete steps Beijing might take.

Myanmar has faced growing international anger over its treatment of the Rohingya but China has helped shield the country from censure.

Earlier this month, the UN Security Council dropped plans to adopt a resolution demanding an end to the violence in Myanmar in the face of strong opposition from China.

According to Bangladesh's private news agency UNB, Wang held a briefing for a small number of local media at China's embassy in Dhaka where he said Beijing supports "a proper solution of the problems through bilateral channels."

But he warned against further moves at the UN to criticize or punish Myanmar.

Wang is the first of a host of foreign ministers from Asia and Europe who are visiting Bangladesh for talks on a refugee crisis that has left the impoverished nation reeling.

Bangladesh Foreign Minister Ali will take his counterparts from Germany, Sweden and Japan, together with the European Union's diplomatic chief Federica Mogherini, to the border town of Cox's Bazar on Sunday to see the camps.

Refugees are penned inside vast, squalid camps, and UNICEF estimates that 25,000 children are suffering from severe malnutrition that could easily become a major killer.

Bangladesh and Myanmar have agreed, in principle, to begin repatriation of the Rohingya but are still tussling over the details.

Yet, on Thursday, Myanmar's powerful army chief distanced himself from any suggestion of a quick return. The Rohingya, he said, could only return if Buddhist citizens accepted them — a highly unlikely scenario given that the minority are so widely loathed and ostracized inside Myanmar.