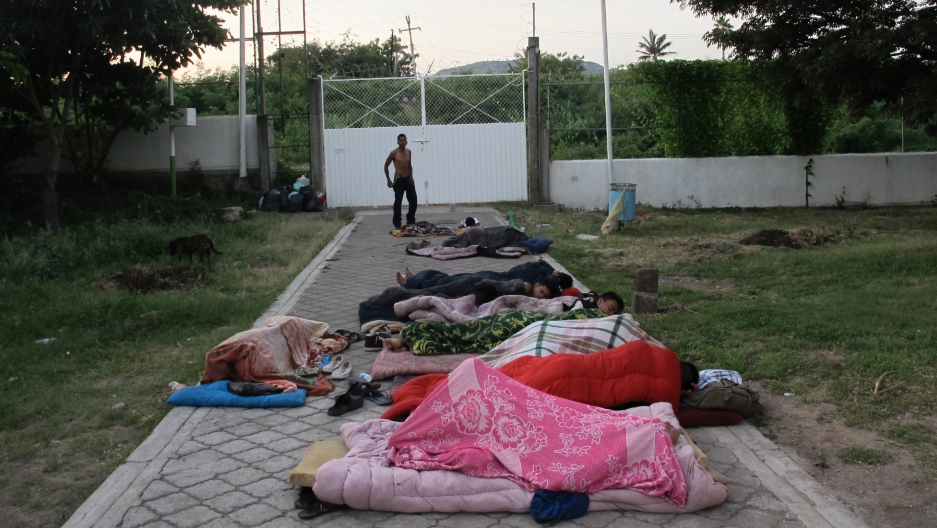 Migrants sleep on the ground at dawn at the Hermanos en el Camino shelter in Ixtepec, Oaxaca. The buildings here are too damaged by the recent earthquakes to enter.

On a sultry summer morning, Central American migrants huddled together in the courtyard of the Hermanos en el Camino migrant shelter in Ixtepec, Oaxaca, discussing the complexities of checkers.

Joel Álvarez, 27, moved one of the plastic bottle caps that served as checkers pieces over a piece of plywood lacquered with blue and red squares, painted with nail polish. When Álvarez successfully got a piece into his opponent’s side of the board he flipped the bottle cap over, crowning it king. He calls checkers an “obligatory pastime.”

The checkers games at this migrant shelter are a fun distraction from long, boring days where the temperature often climbs up to 100 degrees. Most migrants standing here fled violent gangs in Honduras, El Salvador or Guatemala. Álvarez had two older brothers who were recruited to work for rival gangs. They urged their younger brother not to take the same path; both were dead by age 24. 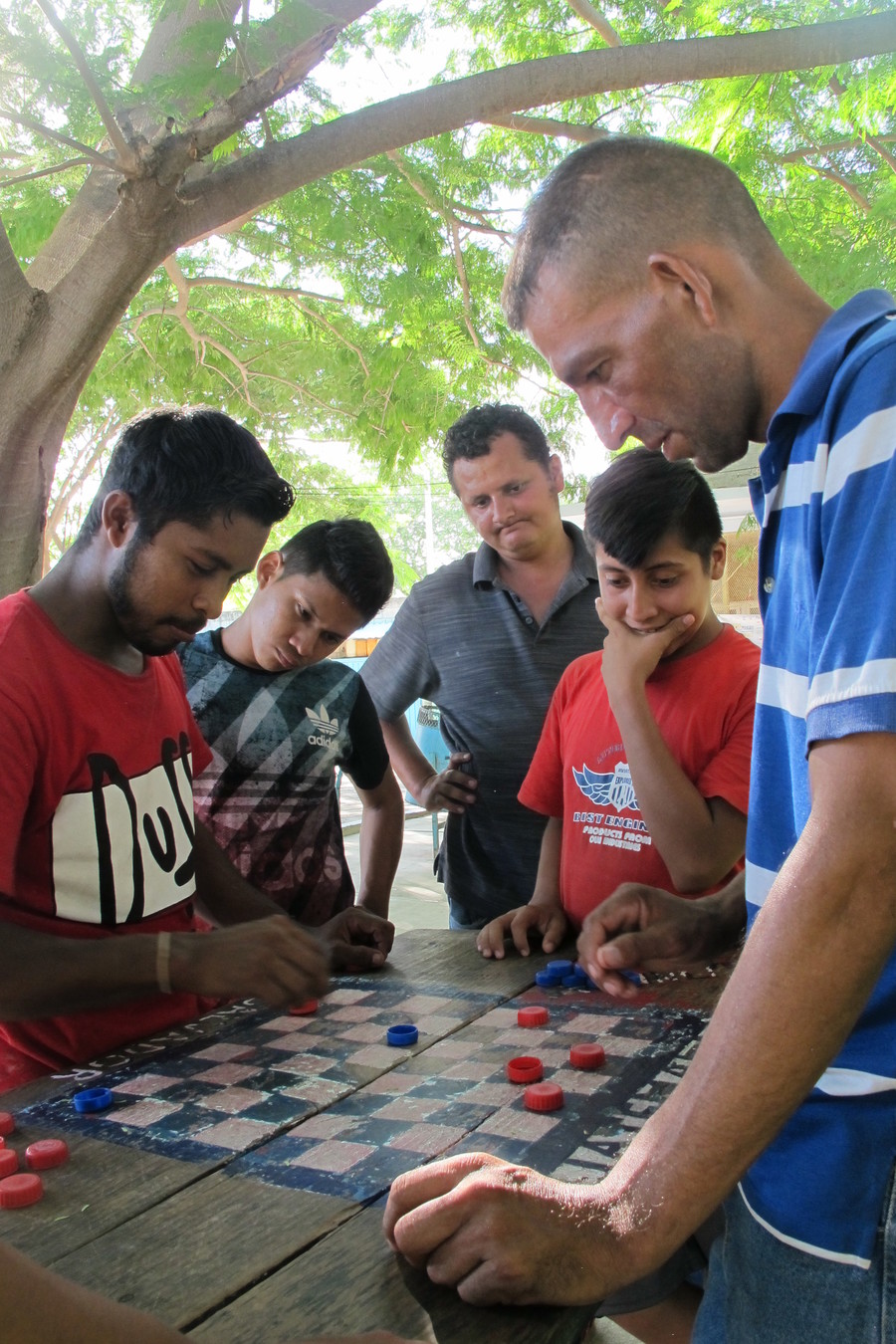 Many Central American migrants pass the days playing competitive games of checkers at the local migrant shelter in Ixtepec, Mexico. The city, as well as the surrounding region, was devastated by last September’s earthquakes.

Álvarez hoped to start a peaceful life in the southern Honduran region of Choluteca. He took out a small loan to start a furniture business. But just three months later, a local gang started calling his phone demanding extortion payments. They asked for about $1,300 a month, more than three times what Álvarez actually earned. When Álvarez explained he couldn’t pay, he received a death threat.

“They gave me 24 hours to flee the country,” Álvarez said. “If I hadn’t left, they would have killed me.”

Life was hard enough already this summer for migrants gathered around the checkers board at this shelter in Ixtepec, a steamy railroad town about 450 miles south of Mexico City. But the 8.1 magnitude earthquake that devastated the Mexican state of Oaxaca in September has further complicated the lives of Central American migrants journeying north, many toward the United States. This shelter, once a well-known place of refuge, is now cordoned off with yellow caution tape. Although basic operations continue, all of the buildings are too damaged by the earthquake to enter.

Related: On the way to the US, children seeking asylum are often put in Mexico’s detention centers

As the setting sun drew long shadows along Ixtepec’s rail yard on a recent afternoon, Álvarez and other migrants moved beds out of a dormitory at the shelter. Inspectors deemed the building too unsafe to enter. Migrants now sleep outside under large, plastic tents that make a loud crackling sound when they blow in the wind at night. Strong aftershocks still shake the buildings here, more than a month after the most powerful earthquake to strike Mexico in a century devastated the region.

“When the earthquake hit, it sounded just like a train,” said Ángel Flores, 37, of El Salvador, “only that same noise was coming from inside the earth.”

The actual train known as La Bestia, or, The Beast, rumbles past the shelter every couple of days. Migrants used to ride on top of the boxcars. But today the train tops are empty. Mexican authorities now patrol the railroad as part of an immigration crackdown, using US funding, called The Southern Border Program. Instead of riding the train northward, migrants now complete much of the trip north from the Guatemalan border to Ixtepec by walking along the railroad tracks.

This journey on foot takes some migrants weeks, leaving them more exposed and vulnerable to gangs and other criminals who wait along the way to assault them. The Hermanos en el Camino shelter is an important milestone on the trek northward, but the earthquake has complicated the shelter’s work to offer migrants aid. 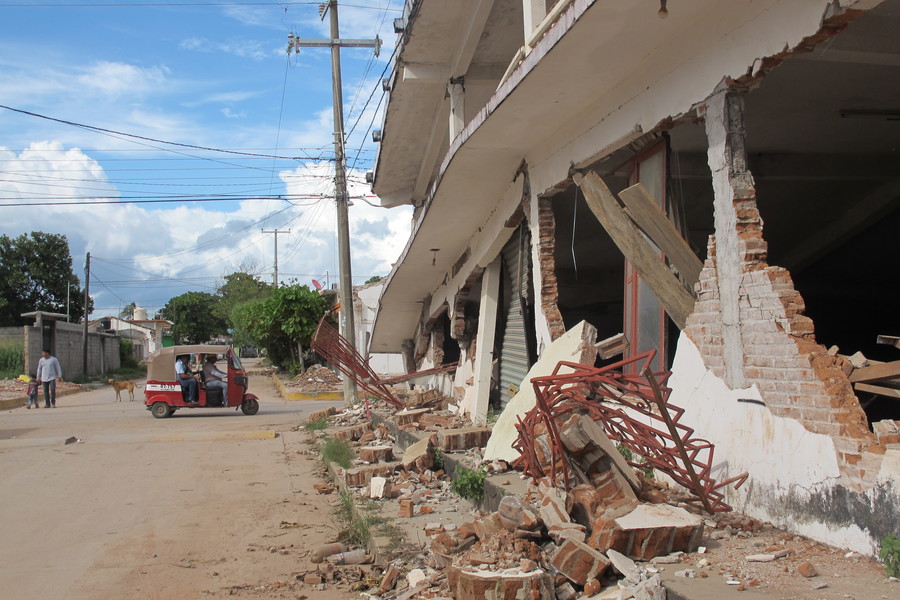 A damaged building in the town of Asuncion Ixtaltepec, Oaxaca. Central American migrants are helping with the rebuilding effort, either as volunteers or as construction workers.

This shelter isn’t just a place to sleep. Staff members also help migrants get legal immigration status in Mexico. With rare exceptions, most migrants who arrive at this shelter have been victims of robbery or assault in Mexico, crimes that give them the right to apply for humanitarian visas to stay.

After the earthquake, many state and local agencies shut down. They're still not operating at full capacity, making it impossible to apply for a visa, though things are starting to get back to normal. But so far, the men and women here have essentially been stuck. They may have to wait months to receive legal immigration status in Mexico.

Volunteers at the shelter carry on as best they can. Today they do intake with new arrivals under a tent. Rolls of toilet paper and other donations now fill phone booths, where migrants once made calls to friends and family in the US. Destruction from the earthquake has made it impossible for the shelter staff to plan ahead.

“Either we suddenly get a huge group of migrants coming in, or everything starts shaking again,” said Felipe González, a 27-year-old volunteer from La Porte, Indiana.

As González took a break from the work, he yelled in surprise and jumped away from a nearby building after another strong aftershock rattled this beleaguered city.

Despite delays in the visa application process, in some cases the earthquake is actually helping migrants in their journey northward. Many migrants have found jobs clearing rubble or rebuilding houses damaged by the earthquakes.

As night falls, migrants filter into the shelter after work. The clicking sound of bottle caps fades away into the stillness of night as the last checkers game of the day comes to an end. Some migrants sleep under makeshift tents outside. The others find space on the ground. Álvarez, the furniture maker from Honduras, says the hardest thing about this experience is being separated from his 3-year-old daughter. He had to leave her behind with a grandmother in Honduras.

“I’d prefer that my daughter have a father who’s far away, than one who’s dead,” Álvarez said.

The shelter is full of migrants with similar stories of having to flee Central America quickly after death threats. And that’s why the space outside the shelter’s damaged buildings — riddled with cracks — is still an important place of refuge.

For most migrants here, going to sleep outside in a disaster zone in Mexico is a much safer option than staying at home in Central America. 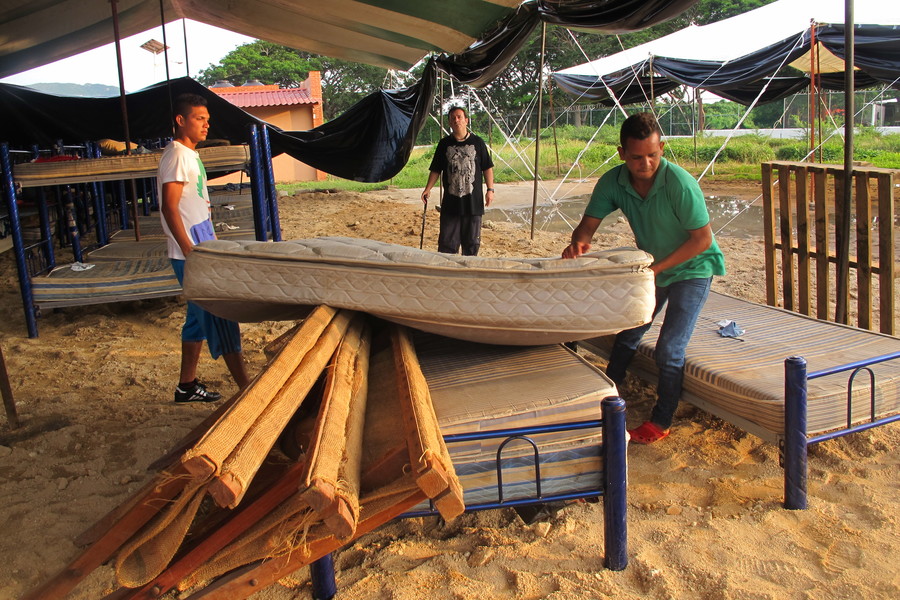 Migrants move beds out of a dormitory badly damaged by the strongest earthquake to hit Mexico in a century into a large tent at the shelter in Ixtepec, Oaxaca.