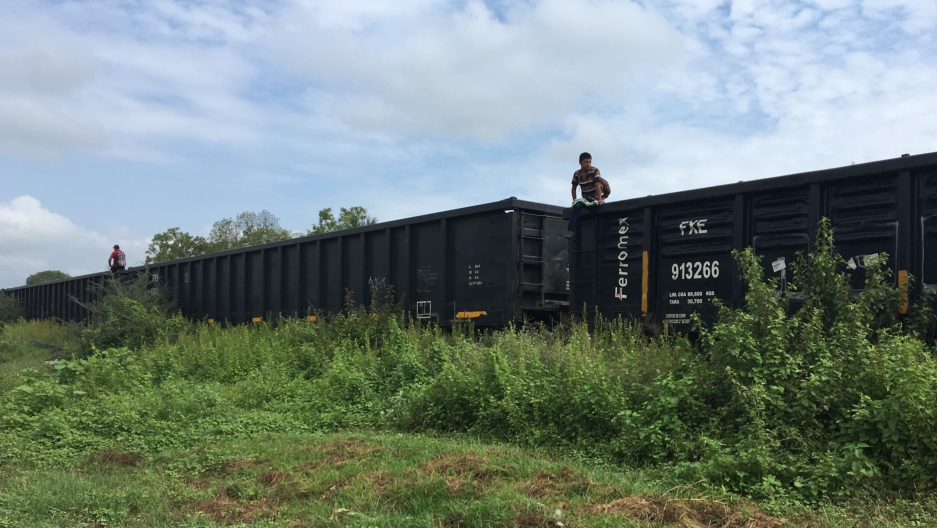 Central Americans ride on freight trains through Mexico on the way north to the US, but increased enforcement makes the route increasingly dangerous.

It’s like sharing ghost stories, but these are real.

Late in the evening, Esteban and his new friends at the Adolescentes en el Camino shelter in Mexico City are sitting around a kitchen table, trading tales about their journey. All of them are young Central Americans traveling on their own, hoping to reach the US. And they’re all escaping violence or poverty back home.

In Esteban’s case, it was both.

“Gangs are arriving in even the most distant towns,” Esteban says in Spanish. He asked that we use only his first name to protect his and his family’s safety. “If anyone opens up a little stand, [the gangs] start to pressure them to pay monthly extortion fees. And you have to do it or they might kill your family.”

Esteban, 19, grew up on a farm in a small town in Honduras. He played drums in church and soccer at school — he likes to joke that he become a fast runner and that came in handy when he had to outrun immigration authorities. 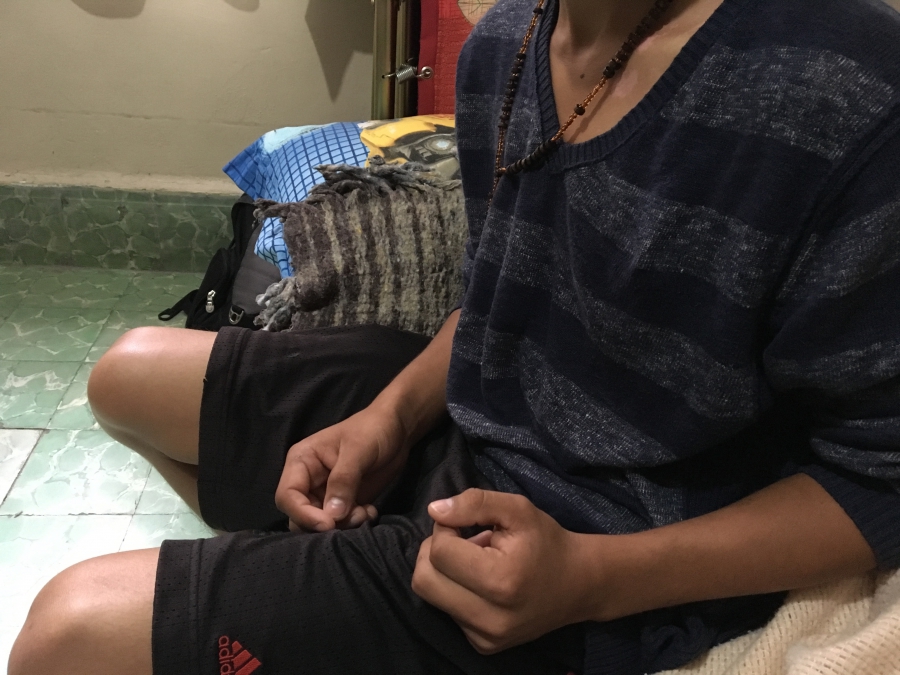 Esteban, 19, arrived at the Adolescentes en el Camino shelter in July after he an another group of young migrants were transported by bus from Ixtepec, Oaxaca.

When gangs arrived in his town and demanded that his family pay a cuota, a monthly fee, they couldn’t afford it. So Esteban set off for the US in June to earn enough money to help his family move somewhere else in Honduras.

“I felt scared because those people don’t have pity. They don’t know what is to be poor or anything like that. Blood speaks to them,” he says during an interview in the shelter in July. As he sits on the bed in a room he shared with at least four other youths, he touches a brown, beaded rosary around his neck.

Once Esteban crossed into Mexico, he traveled on foot and on top of freight trains to avoid immigration checkpoints. But it didn’t take long for him to run into the very problems he was trying to escape. One day, when he was walking along the train tracks with other Central Americans, gang members stopped them and held them at gun point. They made everyone take off their clothes to see if they were hiding money — and also to check if any of them had tattoos from rival gangs.

One of them did.

“When he took off his shirt, they saw his tattoos. I didn’t dare open my mouth because if I said anything they’d think I was his friend,” Esteban says. “Just as they were about to shoot him I bowed my head and I prayed to God: ‘Forgive him.’ They didn’t forgive him. They shot him in the head and took his body away. I don’t know why.”

Esteban shakes when he talks about what he saw. He eventually made his way to Ixteptec, Oaxaca, where human rights advocates put him on a bus to the shelter in Mexico City, 500 miles away.

They also presented him with a new option: stay and work in Mexico.

Esteban is one of a growing number of Central American migrants who have applied for Mexico’s humanitarian visas. The visas are temporary — usually one year — but they can be renewed, and they’re faster and easier to get than refugee status. The number of humanitarian visas granted in the past year has more than doubled, from 1,303 to 2,951, according to immigration records. Most of them have gone to Central Americans.

Those eligible for humanitarian visas include migrants who report being victims of a violent crime in Mexico, as well as those who might qualify for refugee status. Over the past year, officials say applications for refugee status in Mexico have soared.

Mexico apprehended close to 360,000 undocumented migrants from 2015 to October 2016, and it granted refugee status to a little more than 3,000 people. Only 123 of them were unaccompanied minors, children who crossed the border alone.

Father Alejandro Solalinde runs several shelters for Central Americans across Mexico, and he helped open the shelter in Mexico City for young migrants where Esteban was staying. He also accompanies them on the journey to Mexico City.

“I accompany them from the south to get them away from danger,” he says in Spanish. “They face extortion, kidnapping, disappearance, sexual exploitation and trafficking.”

And that journey has only gotten more dangerous for Central Americans, as Mexico has stepped up immigration enforcement in the past few years. 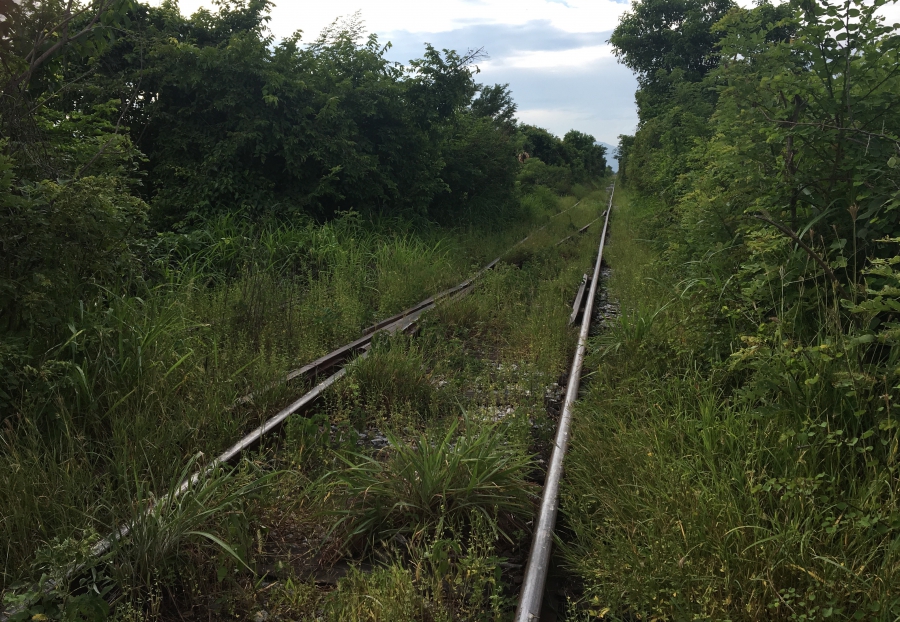 Central Americans making their way through Mexico are increasingly traveling through isolated areas to avoid checkpoints. And that makes them more vulnerable to gangs.

On July 7, 2014 Mexican President Enrique Peña Nieto launched a new southern border strategy known as "Plan Frontera Sur." The plan promised to protect migrants, in part by conducting inspections on freight trains to prevent migrants from traveling on them. The result has been that migrants are increasingly altering their routes to avoid checkpoints, pushing into more dangerous areas in the jungle.

It’s not clear how a President Donald Trump and his talk of a wall along the US-Mexico border might affect the plans of Central American migrants seeking to get to the US, and whether more of them might ask for protection in Mexico. Some advocates and analysts of Mexico's immigration policies say that it could drive greater numbers of detentions and deportations of vulnerable migrants.

More: On the way to the US, children seeking asylum are often put in Mexico’s detention centers

But Solalinde says it shouldn’t be an option to send them home. If the US won’t help them, he says, Mexico should.

“Given the increase in the crisis in their countries, meaning violence and poverty, teenagers can no longer live in their homeland,” he says.

Still, Solalinde knows he can’t keep kids from leaving his shelter in Mexico City. Esteban got a job working in a thrift store, where he earned the equivalent of about US$40 per week. But it wasn’t enough to help his family in Honduras so after four months at the shelter, he took off for Texas.

“In the US you get paid in dollars,” he says. “I have a friend who can get me a job, and if I send that money to Honduras it would go a long way.”

The humanitarian visa Esteban obtained in Mexico made it easier for him to travel through the country by bus, out in the open. However, it didn’t help him on the US side of the border. He swam across the Rio Grande into Texas and then walked for two days in the desert. Then he got caught and spent a couple of nights inside a Border Patrol processing cell known as a hielera, or refrigerator because of how cold the facilities are.

“They treated us worse than dogs,” he says.

After that, he was held in a jail for two weeks for entering the US illegally.

Before US immigration officers put him on a plane back to Honduras, he says that one of them tore up his Mexican humanitarian visa, so he wouldn’t try the journey again. Esteban admits the officer wasn’t wrong. But given the opportunity, he says he would still do it again.

Valeria Fernández is a fellow of “Bringing Home the World,” a program from the International Center for Journalists, which helped make this report possible.