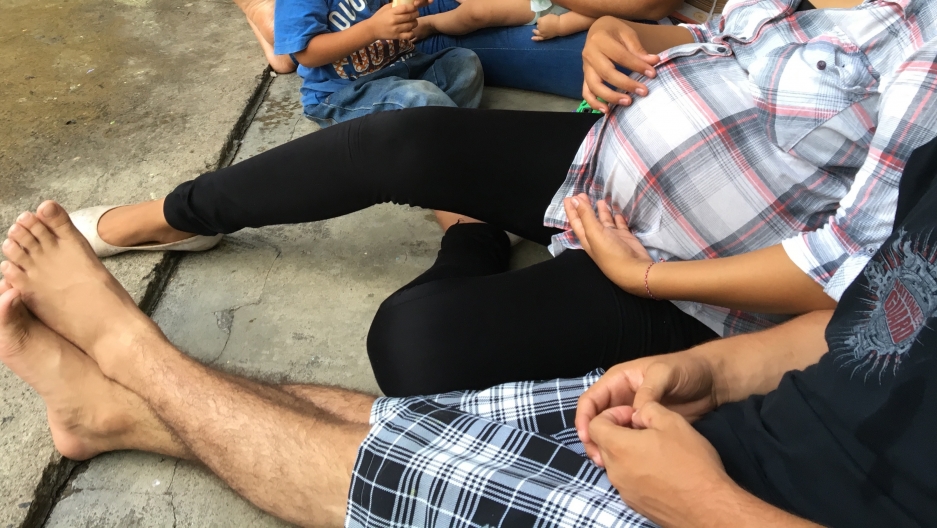 Carlos is a minor, under 18 years old, but he was still held with adults in Mexican immigration detention facilities. His girlfriend, Carla, is 19 years old and was also held in detention after they crossed the border to escape their native El Salvador.

Carlos was so scared inside the Mexican immigration detention center that instead of telling officers he was fleeing El Salvador after gang threats, the 16-year-old asked to be deported back to his country.

Mexico too is being criticized for the incarceration of thousands of children crossing the border to escape violence in Central America. Their National Human Rights Commission issued a 250-page report this October denouncing conditions and treatment of children in detention centers, like the one where Carlos was held.

“Unaccompanied children should not enter, much less be detained at any point at an immigration station,” says Edgar Corzo Sosa, general inspector for Mexico’s National Human Rights Commission. They should, instead, be moved to a shelter that cares for children.

Carlos is afraid of being found by gangs, so he asked not to use his last name in this report. He is among more than 15,000 children who were detained after crossing the border into Mexico in the first 10 months of 2016. Many of those children have a right to apply for refugee status under Mexican law. According to government policy, when Carlos was apprehended seven months ago, he should have been transferred to a children’s shelter, where he could have received services and likely would have told authorities that he was seeking protection from violence. This would have allowed him to begin the process of seeking asylum.

Instead, he spent 14 days detained with adult men. The first four days, he was held in a humid and cramped cell in a temporary holding facility near Veracruz. He says they slept on dirty pads with bugs. The cell had a clogged toilet that smelled terrible.

Guards at the small station put him in a separate room when the human rights commission staff came to interview him on one of their regular monitoring visits. The guards told him not to say that he had been detained with adults. He told them anyway.

“Afterwards immigration officials came for me and told me, ‘Why did you tell them that?’” Carlos says in Spanish. “They started to admonish me and they said that since I like being with adults, they’ll put me back there. And they did.”

That experience solidified his distrust of Mexico’s immigration authorities. And his experience only got worse. 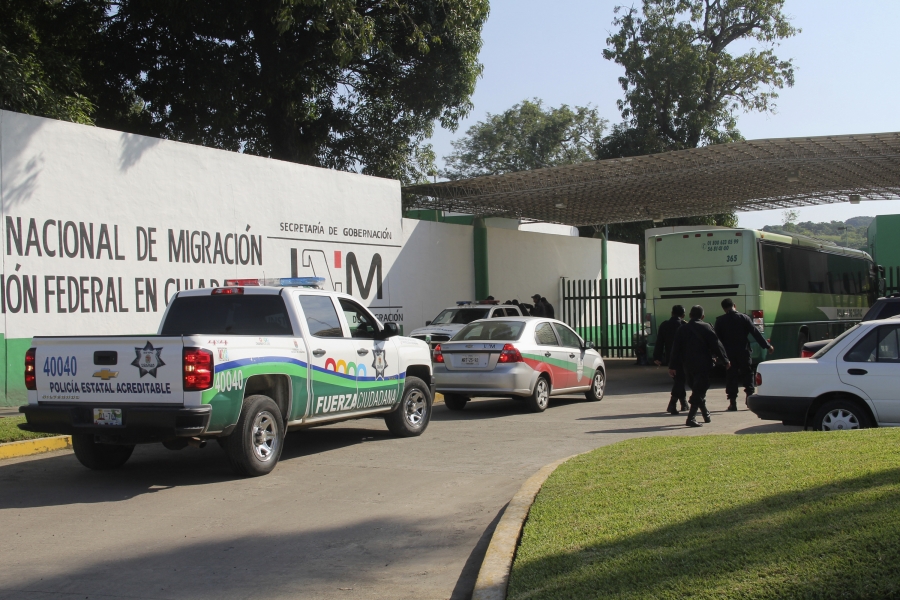 Policemen stand outside the facilities of the Siglo XXI immigration facilities in Tapachula, in the Mexican state of Chiapas October 29, 2014.

After the holding facility, Carlos spent 10 days sleeping on cement beds in an immigration detention center meant for adults in Tapachula, Chiapas, near the Guatemalan border. He was at Siglo XXI, one of the largest government-run detention facilities for migrants in Mexico. The center can hold up to 960 people at a time.

The food, he says, was so bad that he became ill and vomited. Inside there was a marero (gang member) who threatened his life for supposedly being part of a rival gang, which he wasn’t.

“He told me, ‘I’ll kill you at night, you’ll see. When you wake up in the morning you will have your guts out,’” Carlos recalls. “I was going to ask for asylum but I instead asked for my deportation.”

He says he was beaten inside the station by a gang member, and that he complained to officers who didn’t do anything. No one asked him if he was seeking refugee status either, which is information children and teenagers won’t often volunteer immediately, according to experts.

“That’s why it’s so important for them to have specialized attention for children and not for them to be locked in an immigration station,” says Gerardo Espinoza, an investigator at the Fray Matías de Córdova Human Rights Center. The nonprofit has some access to children and detainees at the Siglo XXI detention station.

Journalists are not allowed in the facility and our requests for a tour were turned down. Mexican immigration officials also turned down an interview request; they said most personnel were busy dealing with an influx of Haitians.

“It’s not normal that an institution dedicated to detain and deport minors at the same time is the institution that protects them. There’s something counterintuitive in this situation,” says Corzo Sosa from the human rights commission. 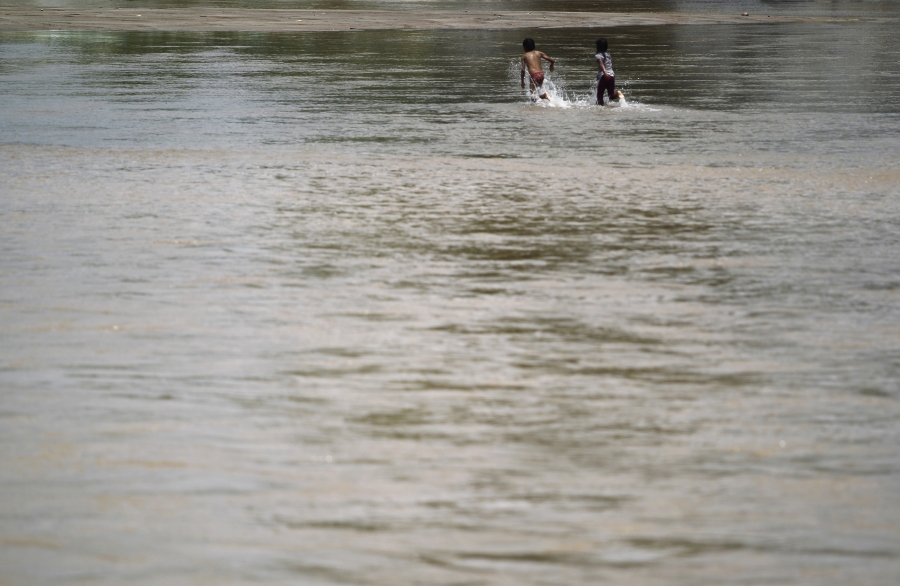 Children play in the Suchiate River near Tecun Uman on August 7, 2014. Stretches of the wild, tropical and largely uninhabited Guatemalan border with Mexico are as porous as ever. The US and Mexico have cooperated to try to handle the increased numbers of families and children who are alone and crossing the borders to escape violence and poverty in Central America.

In 2015, Mexico’s Human Rights Commission found that 36,174 minors, unaccompanied or not, were detained by the National Institute of Migration, the country’s immigration enforcement agency. Only a third were referred to the state’s shelter system for children.

Mexican law makes it clear that children’s best interests need to be protected regardless of their country of origin. But it does allow for children to be placed in detention in “exceptional circumstances,” when children’s shelters are at full capacity.

Each shelter operates independently, sometimes under state or municipal authority. The National System for Integral Family Development, which oversees children’s shelters, did not respond to inquiries for this story.

Carlos was deported in June after two weeks in detention. But he didn’t take long to return to Mexico. I met him and his 19-year-old girlfriend, Carla, then nine months pregnant, in mid-July at a privately-run shelter for underage youth in Tapachula, Chiapas, near the border with Guatemala. Carla had faced similar hardships in women’s immigration detention facilities.

Carlos looks his age. He is light skinned with tiny baby curls in his hair. Carla has dark skin and deep black eyes. She spent a lot of time resting on a patio, ready to give birth at any minute.

This was their third time trying to cross, and this time they managed to evade authorities and find shelter on their own. They had travelled by small shuttles or by foot, sleeping on the street or hiding in the jungle to avoid immigration checkpoints. Unlike the great majority of Central American youth who cross alone into Mexico, Carla and Carlos are not trying to reach the US. They were headed to Tijuana, Mexico, where Carla’s mother lives.

On July 7, 2014, Mexican President Enrique Peña Nieto launched a new southern border strategy called “Plan Integral Frontera Sur.” The Mexican president emphasized that the plan included increased protections for migrants and that unaccompanied minors would have a special place to be processed before being repatriated.

In practice, that’s not what happened.

From January through October of 2016, at least 12,000 unaccompanied minors were detained in immigration stations for adults in Mexico, while another 4,749 received attention in children shelters, according to a public records request in Mexico.

The US has condoned Mexico’s immigration strategy. According to a Congressional Research Services report released last March, the State Department contributed $20 million, mostly in the form of equipment and immigration enforcement training, as part of Plan Frontera Sur. Obama praised the collaboration with Mexico during a meeting with Peña Nieto in January 2015.

“I very much appreciate Mexico’s efforts in addressing the unaccompanied children who we saw spiking during the summer. In part because of strong efforts by Mexico, including at its southern border, we’ve seen those numbers reduced back to much more manageable levels,” Obama said.

Some view the exchange as positive cooperation between countries. But human rights advocates say the US is putting political pressure on Mexico to intersect and deport US-bound minors.

“We’re conscious here that the responsibility when it comes to immigration policies comes from the US and descends toward Mexico and Central America,” says Espinoza of the Córdova Human Rights Center.

As a result of its new border enforcement initiative, Mexico has deported more than 36,000 unaccompanied Central American children, toddlers to 17-year-olds, from July 2014 to October 2016. In comparison, the US has deported 6,055 youth that came to the country as unaccompanied children from October 2013 to September 2016. Most of them were 18-year olds by the time they were deported, but some were minors, according to an ICE spokesperson.

"If an immigration judge orders an unaccompanied child removed from the United States, or grants voluntary departure, ICE arranges for the child's safe return to his or her country of nationality according to agency policy and procedures. ICE recognizes that UAC [unaccompanied alien children] are a particularly vulnerable population and must be repatriated with special consideration and care,” ICE said in statement.

In the US, there is a separate agency that takes custody of unaccompanied minors while they go through immigration proceedings for their deportation or to gain some form of asylum or humanitarian relief. They are housed in shelters under the oversight of the Office of Refugee Resettlement; the facilities are only for children. 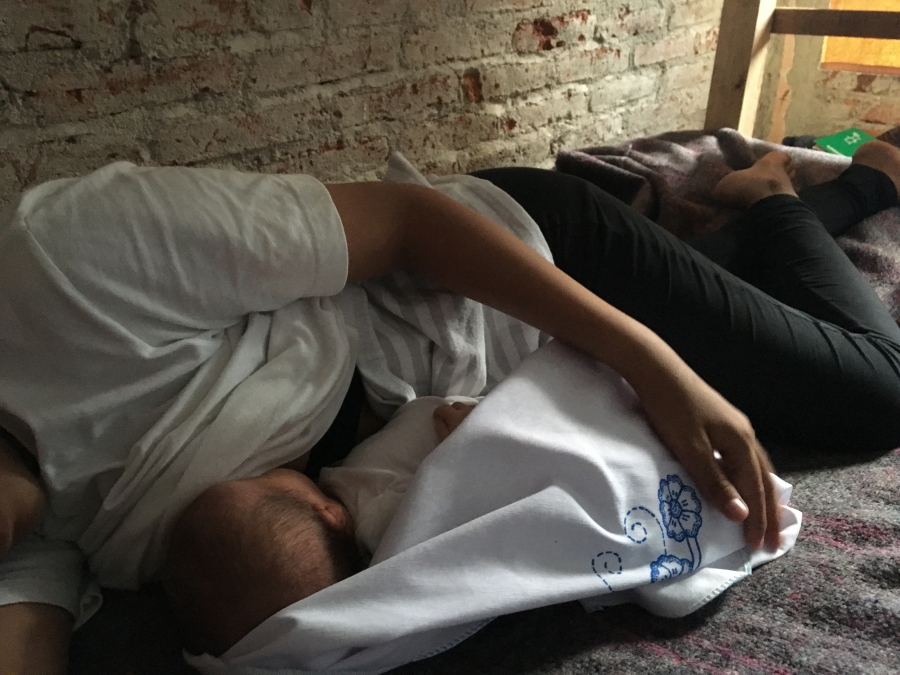 On their third try, Carla and Carlos made it across the border without being detained by Mexican authorities. Their son was born after they arrived at a privately-run shelter.

As the number of Central American children escaping violence alone or with families continues to spike, the campaign promises of US President-elect Donald Trump are also a concern for advocates.

“If a wall is built, it will be a challenge for Mexico because its southern border remains permeable,” says Espinoza. “We’re going to start seeing Mexico as a destination country because many people will be trapped here.”

And that could mean more children in detention on their way to deportation.

On a humid and hot afternoon, I meet Carlos and Carla’s newborn, Carlos Steven. Carla gave birth about 10 days after they arrived at the privately-run shelter. She lays in bed with her baby, who is covered in a white cotton blanket. His tiny wrist has a red bead bracelet to protect him from the evil eye.

They will no longer pursue asylum. Because their son was born a Mexican citizen, they can apply for residency in Mexico, where they plan to stay.

“It is a disappointment to have an experience like the one we had,” Carlos says. “I wish I could be in my country. But we can’t.”

Valeria Fernández is a fellow of “Bringing Home the World,” a program from the International Center for Journalists, which helped make this report possible.