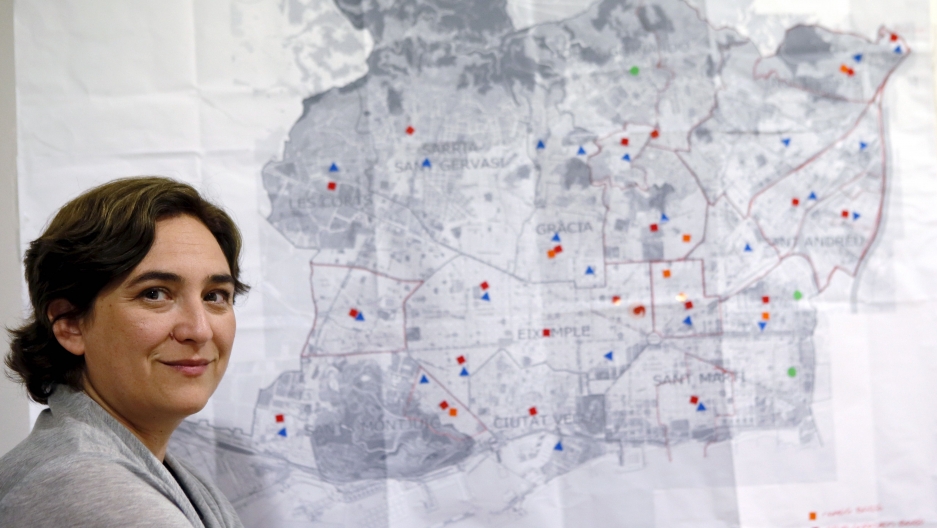 Ada Colau, Barcelona en Comu party leader and then candidate for mayor of Barcelona, poses next to a Barcelona's city map during an interview at their headquarters in Barcelona, April 17, 2015.

At dusk on Oct. 17, a helicopter hovers above a candle-dotted landscape at the convergence of two of Barcelona’s central arteries. A pair of bespectacled women in their 70s, their furrowed brows illuminated by their votives’ flickering flames, tilt their heads skyward and brandish their middle fingers at the craft, joining a chorus of some 200,000 protesters as they intone, “Fora les forces d'ocupació” (“Out with the occupation forces”).

They’ve gathered to decry the arrests of two prominent Catalan independence leaders on charges of sedition earlier that day, the latest development then in the chaotic wake of Catalonia’s referendum on independence two weeks prior, which saw nearly 900 people suffer injuries by Spanish security forces primed for riot action — but faced with pacific resistance. Police’s continued presence in the region, on the ground as well as in the air, only adds insult to injury.

Once the police helicopter passes, Assumpta Verdaguer and Carme Royo settle back into their conversation, adjusting the blue-starred, red- and yellow-striped separatist estelada flags they’ve draped around their shoulders, cape-style. They tell me they’ve given up any hope of reaching some sort of consensus with the Spanish government, which they accuse of ignoring their decadeslong bid for greater autonomy.

“Can you talk to a wall?” Verdaguer asks. “I don’t think there’s a possibility for dialogue. But it won’t be our fault. Oct. 1, the day we voted — ”

“ — that was the final straw,” Royo rejoins. “We’ve been protesting peacefully for seven years, and we’ve never had a problem. And now they won’t let us do that.”

The conflict between proponents of Catalan independence and Spanish unity has reached a head this week, as Catalan President Carles Puigdemont continues to threaten to declare unilateral independence while Spanish Prime Minister Mariano Rajoy takes steps to revoke the region’s autonomy. Almost daily pro- and anti-independence rallies throughout the country echo the leadership’s division, only ratcheting tensions.

But one person still clings to the hope of conciliation. Barcelona Mayor Ada Colau, the first woman to ever hold the city’s office, has emerged as one of the most important voices for dialogue in the region. And the only way disaster can be averted, she says, is by feminizing politics.

“What Ada means by ‘feminizing politics’ is employing less confrontation and making more of an effort to hear each other out and look for solutions.” — a source from Colau’s party, Barcelona en Comú

The 43-year-old activist-cum-politician doesn’t mince her words: She’s repeatedly beseeched politicians on either side of the conflict to drop what she considers to be bellicose rhetoric and “lower the levels of testosterone.”

“What Ada means by ‘feminizing politics’ is employing less confrontation and making more of an effort to hear each other out and look for solutions,” explained a source from Colau’s party, Barcelona en Comú, who asked not to be named, referring to the party's protocols around who can be a spokesperson. “As we’ve seen these last few weeks, the presidents of Catalonia and Spain are not responding to each other’s requests; they’re only leveling threats,” the source said.

Puigdemont and Rajoy have not met in person in months and, lately, have only communicated via letters reasserting their positions. Puidgemont’s more recent overtures for dialogue have come to null.

“It’s become this very binary debate that insists on saying, ‘Yes' or 'No,' to independence, Spain or Catalonia, with these two very masculine governments in charge,” Kate Shea Baird, a Barcelona en Comú activist, adds. “This idea of trying to find some sort of consensus is part of doing politics in a different way that isn’t just about winners and losers. It’s looking at it in a less competitive way.”

“To some, it means that women should be more represented in politics, that there should be more female deputies, mayors, ministers.” — Silvia Claveria, a political science professor at the Carlos III University in Madrid

Political feminization, an expression now common among left-leaning corners of Spanish politics, took root around 2011 with the rise of massive anti-establishment movements such as the Indignados ("Outraged") — anti-austerity activists who inspired the US’s Occupy Wall Street. In fact, the phrase was first popularized by a man: Pablo Iglesias, a former Indignado who went on to found Spain’s populist Podemos party.

Some political theorists concede the term can be problematic. “I mean, look at Margaret Thatcher,” Silvia Claveria, a political science professor at the Carlos III University in Madrid, laughs. It’s difficult to nail down a concise definition, and various politicians have used it to different ends. “To some, it means that women should be more represented in politics, that there should be more female deputies, mayors, ministers,” Claveria explains. “Others go further than that and say that having more women in politics means that they’ll think of policy that affects women. And to others, it’s more symbolic.”

The phrase runs the risk of reinforcing female stereotypes, Claveria says. “It creates the image that women are much more docile, that they only want consensus. Many feminists think it’s dangerous to reinforce those stereotypes and that women carry those attributes only because they’ve been socialized that way.”

"Politics has traditionally been based on the masculine side of that binary, which has allowed men to thrive because they’ve been socialized in that way.” — Kate Shea Baird, Barcelona en Comú activist

Others say that whatever controversy it carries is outweighed by the benefits of even having such an expression. “The idea isn’t to be essentialist and say, ‘Women are like this, and men are like this,’ but to say in general, or traditionally, there are certain qualities that have been associated with the feminine and have been socialized into female-identifying people and others that have been defined as masculine and been socialized into male-identifying people,” Shea Baird says. “So, it’s obviously socialized, and it’s obviously socially constructed, but it still has its effect in the way women and men tend to often operate. Politics has traditionally been based on the masculine side of that binary, which has allowed men to thrive because they’ve been socialized in that way.”

The most bullish step taken so far in the independence conflict is Madrid’s invocation of Article 155: a never-before-used provision in the Spanish Constitution that would strip Catalonia of its autonomy — temporarily dissolving the regional parliament — and which the Catalan government has called a “de facto coup d'état.” Though it shouldn’t affect Colau’s office directly, the Barcelona en Comú source who asked not to be named, says it’s a “grave error, the most serious that has occurred in the last 40 years since the return of democracy.”

Colau, a nonseparatist who nevertheless backed Catalans’ right to vote in the referendum and called for Rajoy’s resignation following Oct. 1, is walking a tightrope of competing political interests. She doesn’t support a unilateral declaration of independence and is dead set against Article 155. Separatist parties in Catalonia are pressuring her to break with the socialist party — upon whom she depends to maintain her hold in the city legislature — after socialists in Madrid backed Article 155. She’s declined to do so.

At least she’s not alone: Colau’s counterpart in Madrid, Manuela Carmena, has praised Colau’s position for being “absolutely balanced and responsible for her city.” The two mayors have appeared at a number of press events together calling for consensus.

“One of the more refreshing images in the last few weeks has been the female mayors of Madrid and Barcelona appealing for dialogue, talking to one another from the capital cities and saying, ‘We love each others’ cities, we want there to be a political solution,’” says Shea Baird.

The national senate will vote to implement direct rule on Catalonia on Friday.