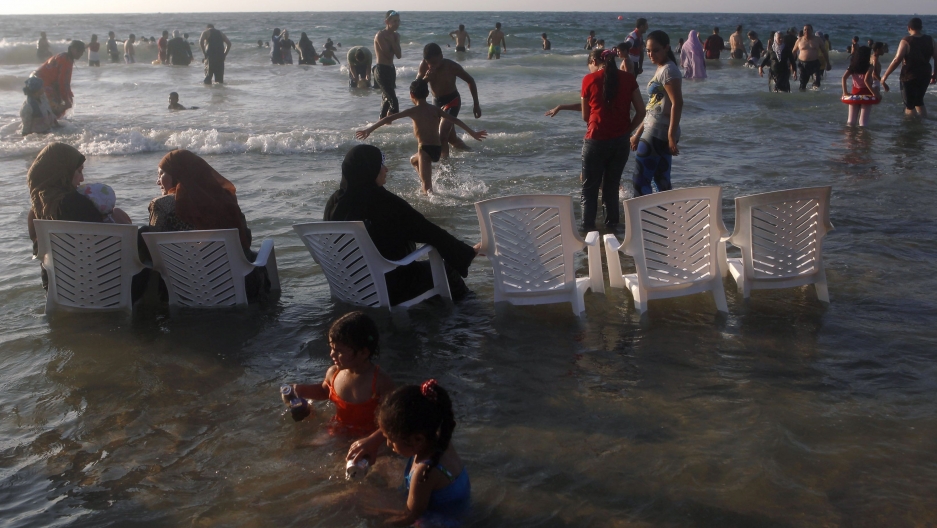 Nada Kabil thought her friends had checked in advance about whether it was OK to wear a hijab at the ACE Club, a country club for expatriates in Cairo’s upscale Maadi district. So, she was taken aback when she arrived and was told that she needed to either take off her head covering or tie it backward, Spanish-style, to get into the place.

The exclusive club permits Egyptians entry if accompanied by a foreigner — but hijabs are prohibited, an employee told Kabil. That policy was later confirmed over the phone by a manager who gave only his first name, John.

“So, of course, I didn’t, and then I left,” said Kabil, a 30-year-old writer, teacher and artist, referring to her head covering.

Kabil’s group was there for a party for a friend visiting from the US. One of them got in wearing a turban, so they had assumed that Kabil's headscarf wouldn't be a problem. This was back in May, but unfortunately, this kind of thing is all too commonplace these days, Kabil says, adding that she always calls ahead.

Numerous Egyptian bars and restaurants that target an affluent clientele have some sort of veil ban in place — that includes headscarves like the hijab or other forms of Islamic headdress as well as the niqab where only a woman’s eyes can be seen. (Parliament has also proposed legislation banning the niqab.)

In such establishments, where Egyptian and foreign women tend to dress in ways more in line with London or New York, veiled women may be deemed out of sync with the more liberal, Westernized image these places seek to project.

And there’s a similar backlash against the burkini at some upscale resorts and private beach compounds where wealthy middle- and upper-class Egyptians often have holiday homes next to the Mediterranean or the Red Sea.

In September, a woman named Dina Eissa shared her outrage about this on Facebook, and her post was shared nearly 9,000 times. Staff at the La Vista 6 resort in Ain Sokhna, near the Red Sea, tried to remove her from a pool after a male guest complained about her burkini. "Most respected places have these rules now so we don't really have much options," Eissa said in her post.

The man in question seemed concerned that her burkini cheapened the place. She overheard him telling the staff, “Next time, you will let the maids use the pool.” In the end, resort staff asked Eissa to leave, but she stayed put, and eventually, the man left.

For Eissa, it was a victory for the right of Muslim women to dress modestly in Egypt, which she said is under threat. “Whoever covers herself now is being punished and stripped of their freedom,” she said.

Kabil, too, has been outspoken about the discrimination veiled women face in Egypt. In an article two years ago, she wrote that it shows “Islamophobia is not just something in the West, it has invaded our territories and Muslims are becoming Islamophobic towards any visible signs of Islam.”

Since then, little seems to have changed, something that Kabil finds exasperating. “I just don’t get it,” she said. “It’s not like I’m somewhere else where they wouldn’t understand. I’m in Egypt; it’s an Islamic country.”

Indeed, it does seem strange that burkini and veil bans happen in a country where 90 percent of the population is Muslim. Though in the upper echelons of Egyptian society, women have been increasingly taking off the hijab since the 2011 revolution, many still wear some form of Islamic headdress.

It's a contradiction not entirely lost on the government, but it has been slow to respond.

Two years ago, Minister of Tourism Khaled Abbas Rami threatened to close down any restaurants or tourism facilities banning women wearing a headscarf. He never followed through.

Earlier this summer, after complaints arose about women being denied access to pools because of their burkinis, the Ministry of Tourism issued an order prohibiting the burkini ban in resorts. Less than a day later, the ministry canceled the order. The ministry could not be reached for comment on this.

“Before putting any rules, we have to check the health and safety of other clients” using pools, said Karim Mohsen, head of the Egyptian Tourism Federation, which works closely with the ministry. He was referring to the oft-cited concerns of some hotels that burkinis not made in the same fabric as swimsuits are "unhygienic."

Mohsen added that probably only a few establishments banned veils, and he likened it to his experience in the UK of trying to get into certain bars, where he would be turned away if the doorman didn’t like the look of him. It’s not discrimination, he said.

And besides, others argue, as alcohol is forbidden in Islam, veiled women shouldn’t even put themselves in places where it’s served.

The veil bans highlight the confusing and contradictory pressures women in Egypt face.

Just ask Reem Ibrahim, 24, an HSBC customer service executive and a professional basketball player. Ibrahim has seen both sides: She isn’t veiled, but her mom and sister are.

Every day for work, on her three-minute walk to catch the private bus for HSBC employees, which picks her up from Cairo’s Haram district, Ibrahim faces harassment and catcalls relating to the tightness of her clothing. Sometimes, she deliberately wears looser jeans and tops to attract fewer comments. “But guess what? I’m [still] getting comments for how I look,” she said.

Street harassment is a part of everyday life for women here. In fact, Cairo was recently named the worst megacity for women. And across Egypt, 60 percent of women, regardless of class or how they dress, say they've been sexually harassed or assaulted, according to a UN gender equality study published this year — in previous years, the figure was as high as 99 percent.

So, in general, concluded Ibrahim, “We are all facing problems, whether you are veiled or not.”

Please take our survey about sexual harassment in the workplace, below. And for more coverage from Across Women's Lives check out: As a woman in media, sexual harassment was the norm. I was told to keep it to myself. And: Sexual harassment at work is a global problem. Now, the world is finally talking about it. And: So many women are saying 'me too.' Editors weigh in about how to move the conversation forward.