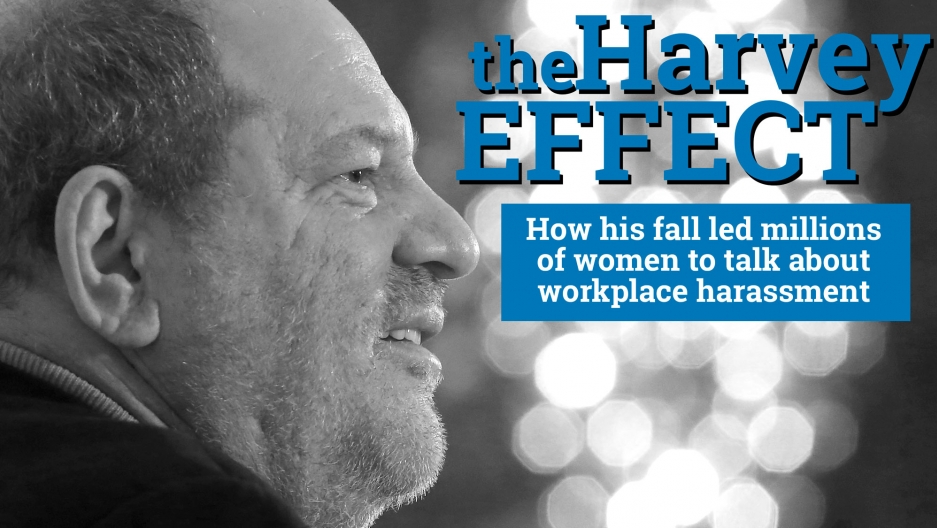 The recent allegations against film mogul Harvey Weinstein have sparked a global conversation about the issue of sexual harassment in the workplace. We devoted all of Friday's episode of PRI's The World to workplace sexual harassment. Listen to the entire program below or scroll down to hear specific segments.

Take our survey about sexual harassment in the workplace, below.

And for more coverage from Across Women's Lives check out: As a woman in media, sexual harassment was the norm. I was told to keep it to myself.​ And: So many women are saying 'me too.' Editors weigh in about how to move the conversation forward.​

Movie mogul, Harvey Weinstein, is being investigated by the Los Angeles Police Department for alleged sexual assault. Kim Masters of the Hollywood Reporter talks about the case, a story she's pursued for some 20 years.

"The first time I had met him and he asked me what I'd heard about him," Masters remembers. "I felt like I had to say, 'I've heard you rape women.' I just had to say that."

'I just want men, if they do something wrong, they have to apologize'

In the US, there's the #MeToo hashtag. In France, there's #BalanceTonPorc, or "Squeal on your pig."

In the wake of the Harvey Weinstein scandal, tens of thousands of French women have posted the name of their sexual harasser on Twitter, along with details of the incident, under the hashtag "Squeal on Your Pig."

But however you feel about #MeToo, the French version is a lot more assertive.

In the wake of the Harvey Weinstein scandal, French journalist Sandra Muller started #BalanceTonPorc. She encouraged women to post the names of men who sexually harassed them at work and details about the incident.

Muller posted her own story about her former boss, whom she said once told her, "You have big breasts. You're my type of woman. I'm going to make you orgasm all night long."

Within hours, the hashtag went viral. Tens of thousands of women came forward, and over the weekend, it became the top trending hashtag in France and one of the top hashtags worldwide.

Jian Ghomeshi, the host of Q, was one of Canada's most popular radio hosts. In 2014, he was charged with four counts of sexual assault and one count of overcoming resistance by choking. He was also accused of and eventually issued a public apology for sexually assaulting a former radio producer on his show, Kathryn Borel. Borel told us her experience with Ghomeshi, whom she said harassed her for years at work.

Borel said she eventually left her job when Ghomeshi faced no consequences despite her harassment complaints. But later, as accusations piled up, she decided to come out of anonymity and share her experience.

“I refuse to use the word 'story' because it's not my story — it’s my facts and my truth,” she said.

Ghomeshi was officially charged with four counts of sexual assault and one count of overcoming resistance by choking in 2014. He was eventually acquitted of those charges, but Ghomeshi did issue a public apology in response to another accusation.

Borel wanted to show people the “institutional disincentives” in place that often prevent women from coming forward when they’re sexually harassed in the workplace.

“There is such a system of justifying this kind of behavior within these kinds of hierarchical structures that I was gutted when nothing happened, and completely unsurprised at the same time, because it was par for the course,” Borel said.

Editor's note: At the time the allegations were made, Ghomeshi was hosting the CBC show, Q, which was distributed in the US by PRI. Ghomeshi left the show, and PRI continues to distribute Q.

In China, a state-run newspaper has come under fire in recent days for publishing a commentary claiming that sexual harassment is a Western problem. Leta Hong Fincher the author of "Leftover Women: The Resurgence of Gender Inequality in China," discusses a rising feminist movement in China that is pushing the conversation forward about workplace sexual harassment.

"There are more and more women on social media in China identifying themselves as feminists," she said. "You have to understand there is still a lot of progress, what you see today, more and more ordinary women saying, 'Yes I was sexually harassed.' That's a huge improvement over several years ago."

'I know the battle needs to be fought at one point, but we've learned to choose our battles'

Nigerian women say they cope with all manner of inappropriate comments and less-than-subtle requests for sex at work. Journalist Adaobi Tricia Nwaubani says if she and her colleagues chose to call out sexual harassment, they'd be quarreling with their male counterparts all day.

But Nwaubani tells host Marco Werman, "Perhaps we need to start doing that to get them to stop?"

She said the Harvey Weinstein scandal is raising some eyebrows in Nigeria because few there would have thought an entire business empire could collapse as a result of sexual harassment revelations.

"I've never really sat down and felt harassed even though these things happened to me so regularly," she said. "I haven't had sleepless nights and gone to see a psychologist or wept about it because I guess it's part of the skills women in these parts of the world develop since men will surely do these things."