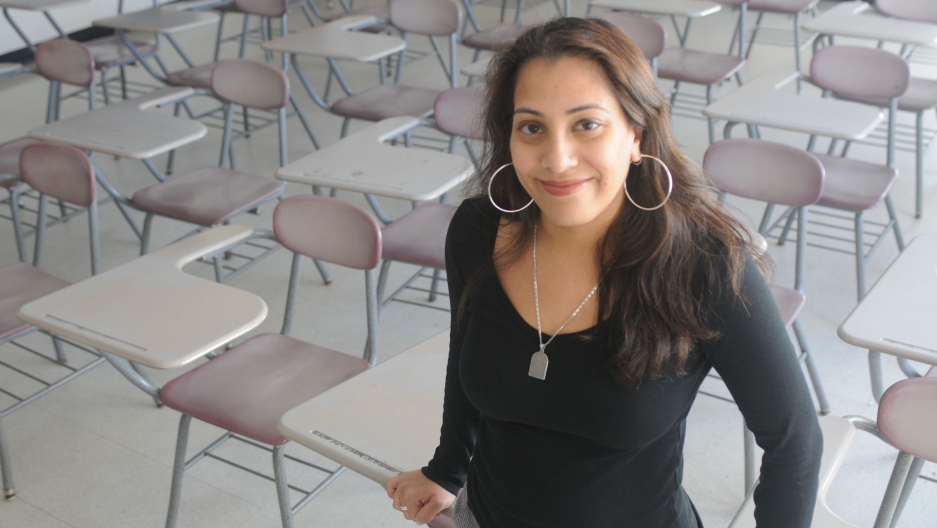 Shaheen Pasha is an educator and journalist.

The sharp, buzzing noise woke me up around 3 a.m. I rolled over in bed and grabbed my BlackBerry. As a journalist living in Dubai at a time when the Arab Spring was igniting all over the Middle East, a late-night text message was particularly ominous. I put in my password and the text message popped up, bathing my face in green light.

“It was so good to meet you this morning. I haven’t been able to stop thinking of you since. What are you wearing?”

I groaned and handed the phone over to my husband lying next to me. “Again?” he asked incredulously, looking at the screen. “Yes, again,” I answered, throwing the phone back on the floor.

As a female journalist, sexual harassment has long been an unfortunate and infuriating part of doing my job. And I’m not alone. According to a 2013 study by the International Women’s Media Foundation, almost two-thirds of female journalists have been sexually harassed or abused on the job. The study found that the harassment ranged from verbal abuse to intimidation and physical violence. And most women never discussed what happened.

Take our survey about sexual harassment in the workplace, below.

And for more AWL coverage, check out: Sexual harassment at work is a global problem. Now, the world is finally talking about it. And: So many women are saying 'me too.' Editors weigh in about how to move the conversation forward.​

I can certainly relate. When I started my career in New York as a financial journalist in the early 2000s, I was often one of the few women in a roomful of some of the most powerful men on Wall Street. I was young and unsure, learning the ropes of an industry that baffled me. So, when a corporate executive would comment on my appearance as I asked a question or brush past me with a quick, overly familiar squeeze to my waist, I’d swallow the discomfort of the situation and put on a brave face. I’d try to be professional even as I seethed inside.

I wish I could say it got better as I progressed in my career. The world seemed to be evolving. There was more openness about sexual harassment and sexual abuse in the media. Men were more vocal about being allies. Women were moving up in the ranks, gaining more power in various industries and proudly declaring their sexual agency.

But as a woman of color in the journalism industry, I often felt that the evolution had passed me by. No matter what I did, how many stories I broke or how respected I became in my field, every time a source or a male colleague made reference to my body, asked me out on a date or felt the need to touch me without my permission, my achievements suddenly became secondary to my sexuality. It felt like an uphill battle for respectability that I could never win.

I felt marginalized in a way that I couldn’t explain because, over the years, I’d been told by mentors — both men and women — that speaking out would be career suicide. I was a 19-year-old intern the first time I heard that advice, and I took it to heart.

Journalism has never been kind to women of color. According to a 2016 report by the American Society of News Editors, Hispanic, black and Asian women make up less than 5 percent of the newsroom personnel at traditional newspapers and online news outlets. Those numbers were likely even lower when I entered the field. I certainly didn’t see many people that looked like me at the time. As a woman of color, I had to ask myself: Did I really want to gain the reputation of being difficult in a newsroom, unable to take a joke even though the jokes were often at the expense of my figure?

So, I stayed silent, refusing to make any waves that could make me expendable in this industry. By the time I became a foreign correspondent in the Middle East, I had years of practice on how to wear my thick skin.

I laughed it off when the nice, pious man in the thick beard who called me his Muslim sister over a coffee meeting in the morning would send me lewd texts in the middle of the night. I would politely disengage myself from the drunk, British expat at the high-powered law firm who handed me his business card and then refused to let go of my hand as he pulled me uncomfortably close to chat. I arranged for my friend in the newsroom to call me with breaking news when a source at a lunch meeting told me he’d pass me some exclusive information over a drink in his hotel room. I did everything but actually call out the men who were humiliating me.

It wasn’t until I decided to leave full-time journalism to become a professor of journalism that the weight of that silence became too much for me to bear. I looked at the young women in my classroom and realized that many of them would be forced to experience the same type of harassment I had endured for almost 15 years. I felt an enormous responsibility to prepare them, to make them realize that they did not have to accept it. They did not have to hide the shame they felt behind a façade of toughness. They didn’t have to laugh it off and pretend that they didn’t feel violated and marginalized.

It’s a lesson that came later in life for me. But it’s a lesson I’m hoping to impart on the next generation of female journalists — many of whom are sitting in my classes today.

Shaheen Pasha is an assistant professor of international journalism at the University of Massachusetts Amherst. She was previously a reporter for Dow Jones/WSJ, CNNMoney and Thomson Reuters. She now freelances for publications such as The Dallas Morning News, The Daily Beast and USA Today.