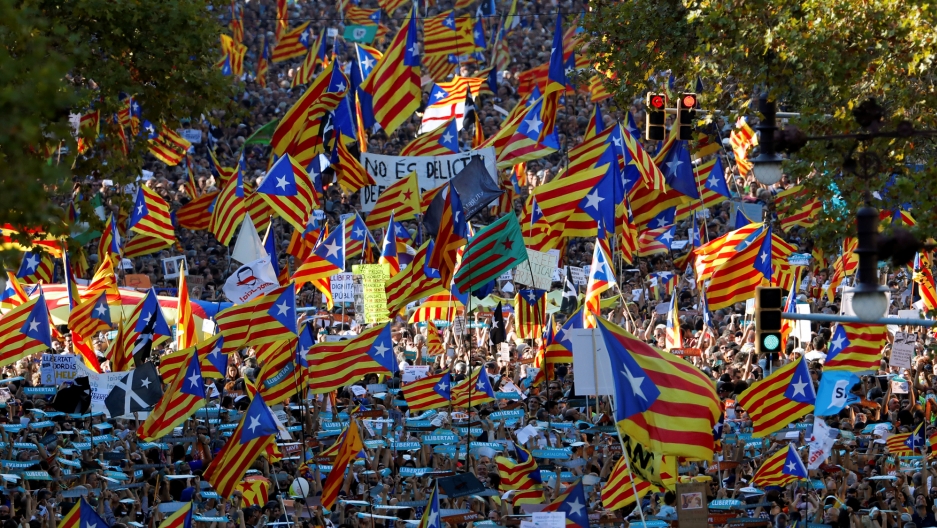 A far-left Catalan party on Monday threatened "massive civil disobedience" if Spain dismisses the region's government to stave off its threat to declare independence.

The Popular Unity Candidacy (CUP) party denounced Madrid's plans as the "biggest aggression" against the Catalan people since the Franco dictatorship.

"This aggression will receive a response in the form of massive civil disobedience," said the party, a key regional power broker, in a statement.

Catalonia's parliament announced will hold a plenary session on Thursday to decide its response to the central government's move to dismiss the region's government.

The plenary could continue on Friday when Spain's Senate is expected to vote on measures proposed by Prime Minister Mariano Rajoy to dismiss the Catalan government.

The CUP's threat upped the stakes in the standoff over Catalan independence, which has raised fears of unrest in Spain's deepest political crisis in decades.

Half a million angry separatists took to the streets of Barcelona on Saturday after Spanish Prime Minister Mariano Rajoy announced he would remove Catalan leader Carles Puigdemont and his executive.

Rajoy said Madrid would take control of ministries under unprecedented measures to stop the region breaking away.

The CUP is a key ally of the ruling separatist coalition in the regional parliament.

It said the details of the protest actions it is planning would be unveiled later this week.

Though polls indicate Catalans are divided on whether to break away from Spain, autonomy remains a sensitive issue in the northeastern region of 7.5 million people. Catalonia fiercely defends its language and culture and has previously enjoyed control over its policing, education and healthcare.

Francisco Franco — who ruled from 1939 until 1975 — took Catalonia's political powers away and banned official use of the Catalan language.

In the fallout from the referendum, Spain's government says it had no choice but to use previously untested constitutional powers to seize control of the region in order to preserve the unity of the country.

Madrid could take control of the Catalan police force and replace its public media chiefs. Under the constitutional measures, new elections for the regional parliament must be called within six months.

The Senate is set to approve the measures by the end of the week.

Rajoy's conservative Popular Party holds a majority in the Senate, where his approach to Catalonia enjoys support from other major parties.

Deputy Prime Minsiter Soraya Saenz de Santamaria said Catalan Puigdemont would lose all his powers once the measures were approved.

But political analysts warn that Madrid faces a serious struggle in practical terms to impose control over the region.

"What is going to happen if they don't abide by it?" said Xavier Arbos Marin, a constitutional law professor at the University of Barcelona. He raised the prospect of the government trying to "take them out by force."

There is debate among experts over whether the government's actions are even legal, he added.

Independence supporters may also seek to sink Madrid's plans through acts of civil disobedience such as surrounding regional ministries.

"If police try to enter one of the Catalan institutions, there will be peaceful resistance," said Ruben Wagensberg, spokesman for new activist group En Pie de Paz.

Antonio Crespo, a 65-year-old retiree who joined a protest in the Spanish capital on Sunday night against Madrid's takeover, described Rajoy's decision as "disastrous."

"It's a huge retreat of freedoms and rights," he told AFP.

Puigdemont says 90 percent backed a split from Spain in the referendum, but turnout was given as 43 percent as many anti-independence Catalans stayed away from a vote that was declared illegal by the courts.

Separatists say Catalonia pays too much into national coffers but their opponents arguing it is stronger as part of Spain.

The crisis has rattled a European Union that is already grappling with Brexit.

Against the backdrop of Catalonia's push for independence, two of Italy's wealthiest northern regions Sunday voted overwhelmingly in favor of greater autonomy.

The referendums in Veneto and Lombardy are not binding and the organizers stressed they were seeking greater autonomy and to reduce their regions' tax contributions to Rome rather than looking to secede.

by Alfons Luna and Marie Giffard/AFP