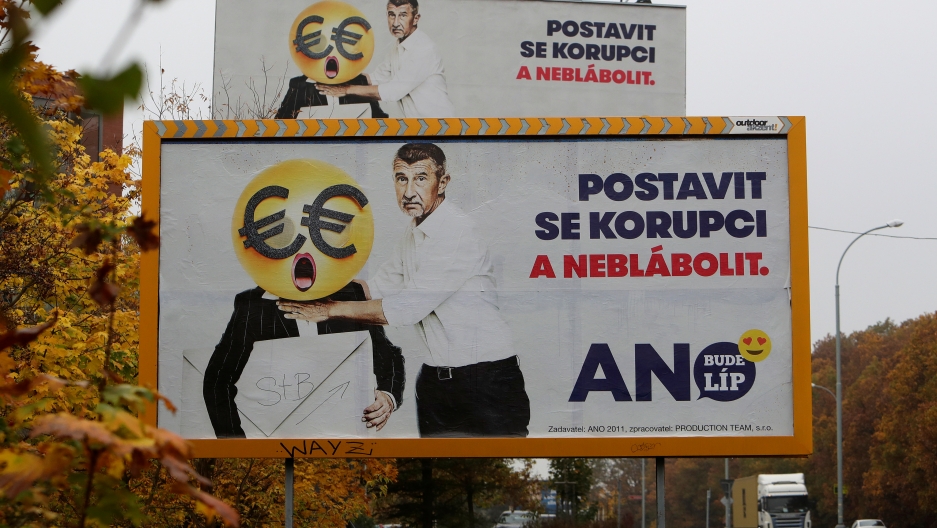 Standing in front of a few dozen supporters in a town east of Prague, the Czech Republic’s second-richest man stood clutching a microphone in one hand and a copy of his book in the other, and declared his distaste for a political establishment he says has long held his country back.

“We belong somewhere else and we’re not there,” he said, referring to the economic potential of a country where he himself made billions. “It’s the last chance to knock down this corrupt system.”

Andrej Babis owns major media outlets and has a stake in virtually every facet of his country’s agriculture sector. Now, after serving as finance minister, he has his sights on becoming the next Czech prime minister — a target he’s expected to achieve when voters go to the polls Friday and Saturday.

And the world media have already taken to calling him a “Czech Donald Trump.” 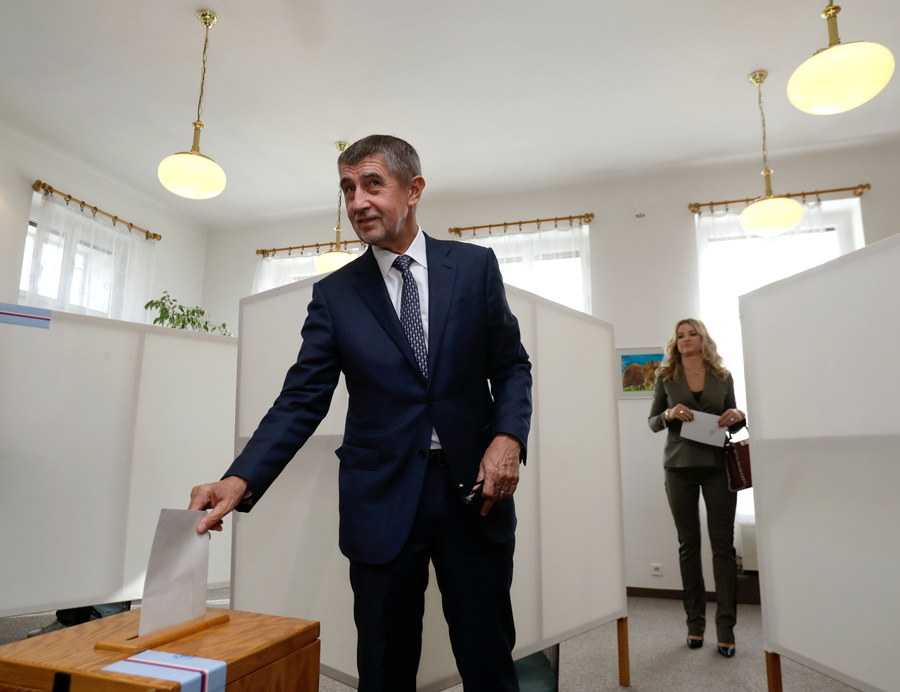 The leader of the Czech ANO party Andrej Babis casts his vote in parliamentary elections in Prague, Czech Republic, on Oct. 20, 2017.

His likely ascension means not one, but two Czech Trump-alikes — the prime minister and the current president — may soon be governing the Czech Republic, one of Central Europe’s last liberal democracies.

And in true Trumpian fashion, Babis says he plans to “run the state like a business.” He campaigned on a populist platform that was often vague on concrete policies.

On some issues, however, Babis’ stance is as clear as day. Though pro-European Union, he has expressed opposition to the Brussels establishment and has slammed the adoption of the euro currency. He is also anti-migrant and has historically close ties to Russian President Vladimir Putin.

What’s more, Babis is eager to “drain the swamp Czech-style,” as BBC Prague correspondent Rob Cameron put it to PRI’s The World.

The Czech Republic does have a corruption problem. It slipped 10 places on the latest corruption index compiled by Transparency International.

However, Babis himself stands accused on several corruption charges that range from subsidy fraud to being a communist agent. He was also caught plotting to use the widely read newspapers he owns to attack political rivals. He has categorically denied any wrongdoing and claims the charges are politically motivated.

Still, recent polls show the 63-year-old businessman and his Action of Dissatisfied Citizens party, known by the acronym ANO, as heavy favorites.

The country’s prime minister traditionally provides a counter-weight to the president, with certain policies needing both their signatures. Babis would share government with Czech President Milos Zeman. He's also a populist with ties to Moscow. He has described Islam as “anti-civilization.” And after becoming one of Europe’s first and few Trump admirers, Zeman earned the White House’s first invitation to a Czech president in over a decade. He will be seeking presidential re-election next year. 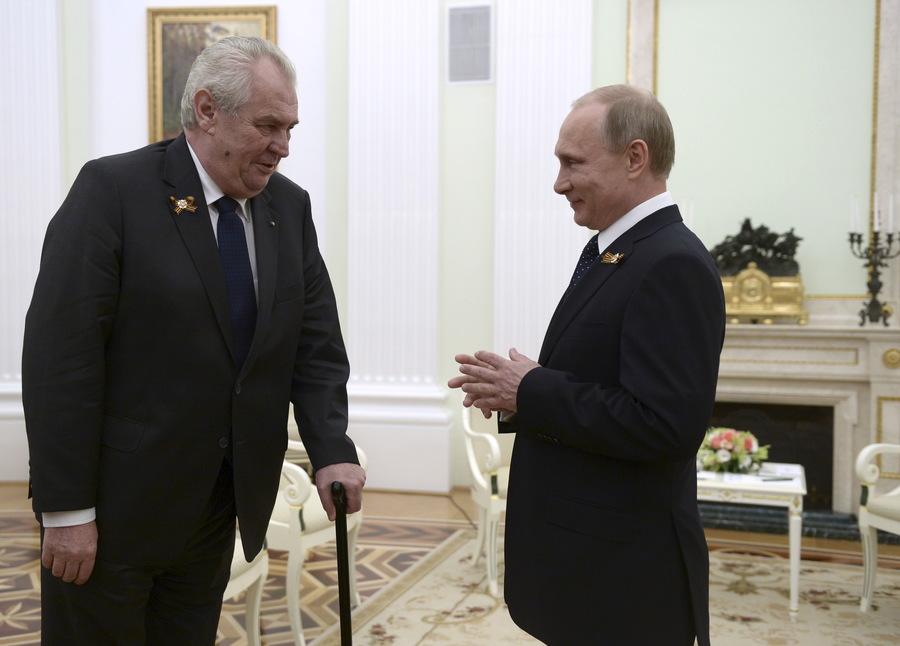 Czech President Milos Zeman, left, talks to Russian President Vladimir Putin during their meeting at the Kremlin in Moscow, Russia, on May 9, 2015.

Although France and Germany just barely beat back a rising tide of nationalism with their election of Emmanuel Macron and re-election of Angela Merkel, Prague may soon join the ranks of former Eastern bloc states, like Poland and Hungary, that have taken a hard turn to the right.

Vít Dostál, director of the AMO Research Center, a nonpartisan think-tank in Prague, says Babis lacks “the capacity or expertise” to govern. “When he speaks, he only follows the emotions of the population,” he says.

But Dostál believes it’s not yet clear that the rise of Babis and his ANO party, founded in 2011, would be a direct threat to the democracy the party worked so hard to create after the country’s Velvet Revolution against communism in 1989.

“It is very hard to read from Babis’ marketing as what he is about to do. I think the problem with ANO is that they don’t have any coherent foreign policy,” he said.

‘Berlusconi is less dangerous than him’

Making matters worse, Babis was removed from his finance minister post earlier this year on allegations of tax fraud. He’s now at the center of another fraud case after being formally charged this month for using a 2 million euro ($2.36 million) EU subsidy meant for small businesses.

In January, parliament forced the then-finance minister to place his firm, Agrofert, in a trust after it banned cabinet officials from owning media or owning more than a 25 percent stake in certain businesses.

But that’s not all — Slovakia’s top court last week overturned previous court rulings that had cleared Babis of cooperation with communist-era secret police.

For some of the voters who have been closely following the election, the allegations should have been enough to close the door on his candidacy.

“It’s a very bad situation,” says Radovan Jokel, 46, a business efficiency consultant in Prague. “He’s compared to [former Italian Prime Minister Silvio] Berlusconi, but Berlusconi is less dangerous than him. His companies basically control the food processing market and so everyone involved in agriculture has some dealings with Babis and what is more dangerous is that he owns some media.”

The allegations come in contrast to some of the positives: As finance chief Babis presided over impressive economic growth. Czech unemployment was at just 3.8 percent in September — which is low for the country and for Europe — and the central bank forecasts the economy to expand by 3.6 percent this year, which is rather high by EU standards. 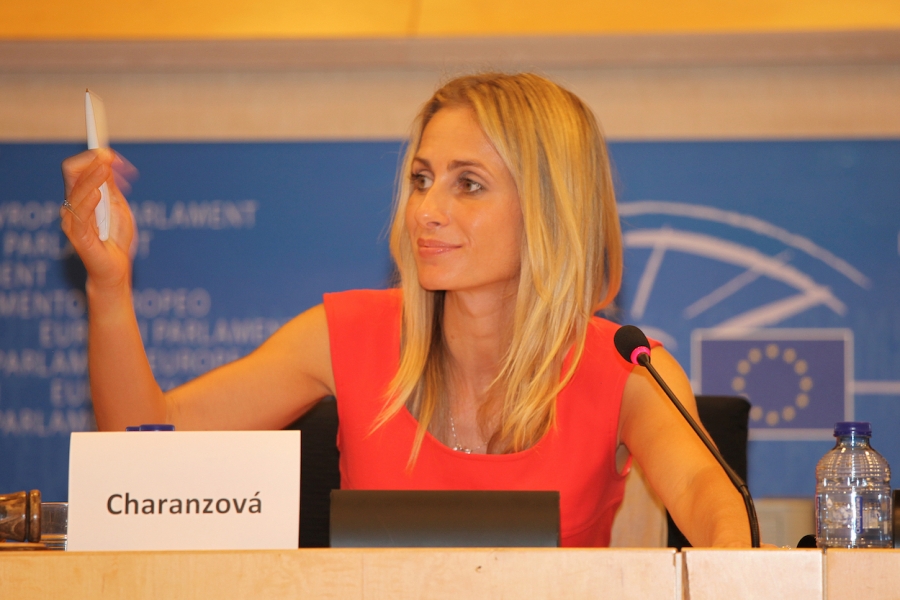 Voters at a recent ANO party event in Prague wouldn’t comment for this report. But on social media, some supporters were ecstatic: “I voted ANO. Things will be better. They will protect the rest of us from republic stolen by the corrupt,” one Babis fan wrote on Facebook.

In addition to his economic accomplishments, optimists say Babis’ likely rise to power represents a larger rebalancing in the region that seeks to give a bigger voice to small countries.

“Mr. Babis is also one of the few politicians who pursued his own EU project as finance minister and also changed the tax system, while traveling around Europe to demonstrate the necessity of that project. So, his personal experience shows a pursuit that aligns with the interest of the country and has shown that regional cooperation is important,” said Dita Charanzová, an influential member of the European Parliament who supports the ANO party.

For Lubomír Kopecek, a political science professor at Masaryk University in Brno, Czechs are merely fed up with a political establishment that has let them down time and again. With multiple governments having folded to Kafkaesque corruption scandals, the Czech Republic has seen nine cabinets in the past 15 years.

“When you look at the traditional politicians, they are connected to a political class that has ruled the country since the 90s. We had a big crash of trust with many scandals and economic problems of the time, and [this has emboldened] feelings of anger,” he said.