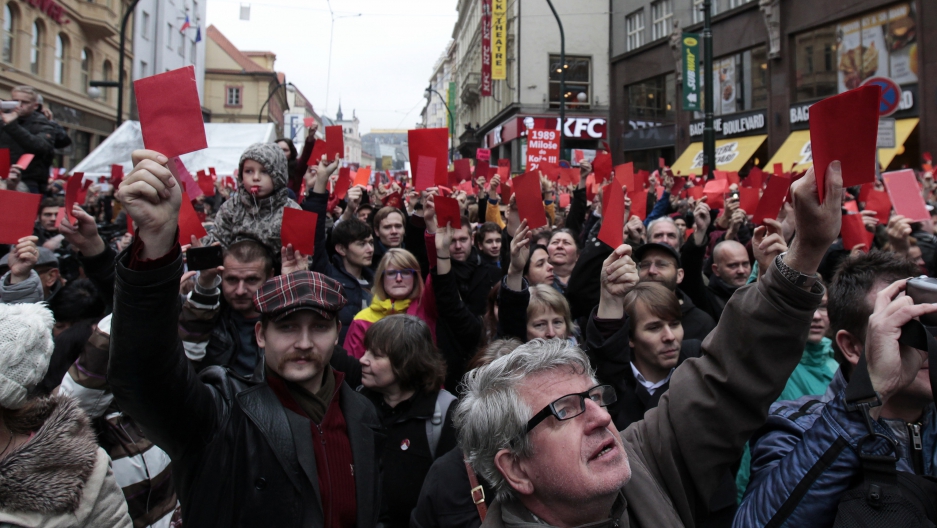 Demonstrators show symbolic red cards to Czech President Miloš Zeman during a protest rally in Prague on the 25th anniversary of the Velvet Revolution in 2014.

In a region awash in populist, euroskeptic and anti-immigrant sentiments, the Czech Republic has acted as the last bastion of liberal democracy — but that could soon change.

Although Czech President Milos Zeman — the self-proclaimed "Czech Donald Trump" — is and has been notoriously xenophobic, power has lain primarily in the hands of pro-EU Prime Minister Bohuslav Sobotka. Sobotka has been leading the Czech Republic's coalition government as a member of the center-left Social Democratic Party since 2014.

But after ongoing conflict surrounding the taxes of Andrej Babis, the country's finance minister, Sobotka announced his resignation on Tuesday. And he says he's taking parliament with him.

"It is unacceptable for the finance minister not to be able to prove the origins of his property," Sobotka said at a news conference. "Especially since he is a member of a government that has built its program on a fight against tax evasion."

Babis is the country's second-richest man. He founded the centrist, anti-corruption ANO (Czech for "yes") Party in 2011. As finance minister, his stated goal was to shake up a corrupt Czech government, using the managerial skills that made him such a successful businessman. As the BBC's Rob Cameron in Prague put it, Babis wanted to "drain the swamp Czech-style."

"Now Mr. Babis finds himself at the center of a controversy over his own tax affairs," Cameron says. "He's been accused of basically buying 55 million euros of tax-free bonds from his own business empire."

With Sobotka's exit, and the country's lawmakers with him, the future of the Czech government is completely up to President Zeman. And it seems no one is certain what he will do.

Cameron says Zeman could do anything from delay Sobotka's resignation, to appoint a new prime minister and caretaker government. But any government established by Zeman would surely stand in stark contrast to the one led by Sobotka.

Zeman and Babis are both known for euroskeptic rhetoric, leading some to worry that their leadership will invite the creeping populism now common in surrounding countries like Slovakia, Hungary and Poland.

"Pro-Russian, euroskeptic governments and politicians. Autocratic, anti-liberal democracy," Cameron says. "Some observers do believe that is what is on the way here in the Czech Republic."

The country is due to hold parliamentary elections in less than six months. Cameron says Babis and the ANO Party are currently polling at 30 percent, while the Social Democrats are polling at 15 percent.

"One thing is certain — [President Zeman] will milk this to the full," says Cameron. "This really puts him in the spotlight and it casts him in the light as a 'power broker' — and that's a role he will enjoy very much."