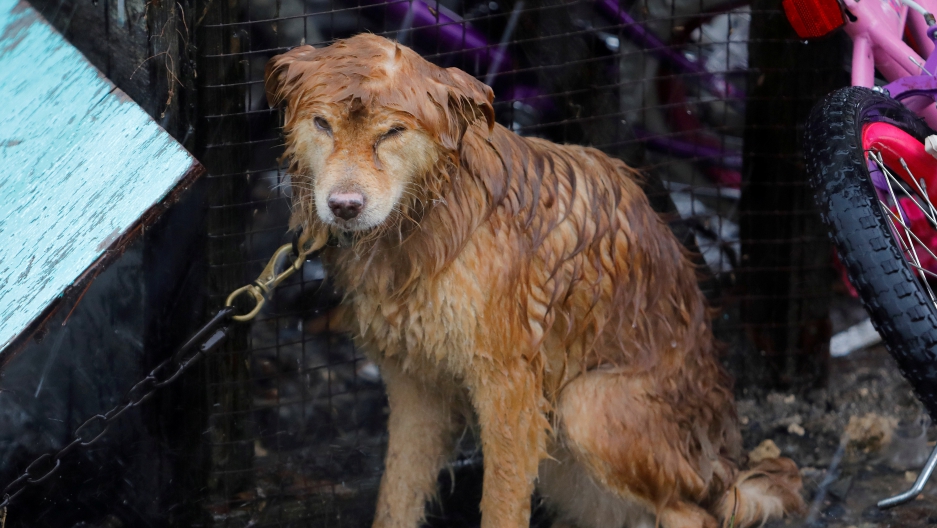 It’s not just people without shelter in the Virgin Islands. A dog is drenched as it sits patiently through another downpour of rain, in Frederiksted, St. Croix, US Virgin Islands Sept. 30, 2017.

There’s been a lot of media attention on Puerto Rico since Hurricanes Irma and Maria struck last month. But Puerto Rico is not the only US territory to be dealing with the aftermath of devastating hurricanes. The US Virgin Islands were also devastated.

Chalana Brown, a reporter with TV2 news on St. Croix, says there are still three key needs for those on the island:

Cellphone towers and telephone poles were ripped down all over the islands. This has made it really hard for individuals to stay in touch, and for government agencies and non-governmental relief organizations to coordinate their work.

Most of the territory remains without power. This has forced hospitals to evacuate vulnerable patients to the US mainland.

Many homes were damaged and many still lack supplies — even tarps — to repair roofs, walls and windows.

“It’s raining. A lot,” says Brown. She’s visited many homes, especially in low-income neighborhoods, where people are still living in damp homes, quickly filling with black mold. “They have nowhere to go,” says Brown. Many on the island don't have enough money to leave.

Related: How a violent history created the US Virgin Islands as we know the

Brown says food is a lesser concern than in other areas hit by the storms. “We may not be getting what we like,” says Brown, “but no one is starving.”

However, there are still concerns, particularly about over-dependence on canned food, which is not ideal for nutrition. Some elderly and vulnerable people initially had difficulty reaching food distribution points, but FEMA and other relief groups are now getting help to these people.

In the medium term, the damage to the territory’s tourism industry is a serious issue, because so many jobs are dependent on hotels, restaurants and stores that service tourists.