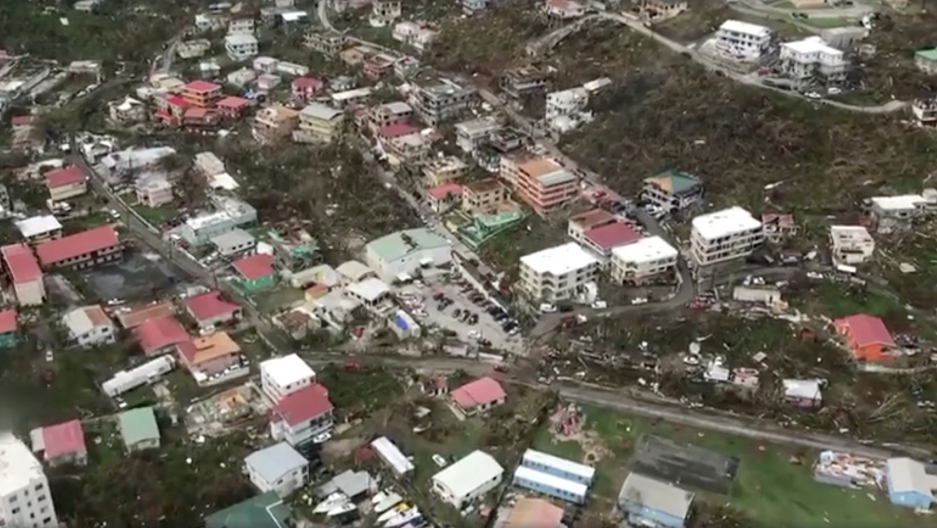 This is an aerial view of devastation following Hurricane Irma on St. Thomas, one of the main US Virgin Islands.

Hurricane Irma is just the latest tragedy to visit the US Virgin Islands: St. Croix, St. Thomas, St. John and a host of smaller islands.

The Caribbean lands are frequently pummeled by hurricanes. Hugo in 1989 and Marilyn in 1995 were harsh, recent examples. But they have also suffered a remarkable number of man-made tragedies.

The islands became US territory in 1917 when they were purchased from the Kingdom of Denmark for $25 million in gold.

It was during World War I. The US was fighting Germany, and the Navy was deadly afraid of German submarines, known as U-boats. Strategists in Washington were fearful that the Germans could force their Danish neighbors to give them access to the harbors of their Caribbean colony for their U-boats. From there, they could devastate shipping around the Atlantic and Caribbean coasts of the continental United States.

Charlotte Amalie, the capital, in St. Thomas, has an excellent harbor, you see.

US interests were military and strategic. There wasn't a concern for the people who actually lived there. The islands became a US territory, and the US reluctantly granted their people citizenship in 1927.

The Danes had been trying to off-load their tropical colony since at least 1867 when they first offered to sell the islands to the US. But it required the paranoia of wartime to push the deal through.

Incidentally, a side benefit of the deal, for Denmark, was the US recognizing the Danish claim to Greenland, which was previously disputed.

Denmark viewed the Virgin Islands as becoming a costly liability after the 1848 abolition of slavery.

The Danes — like the British, Dutch and French — had come to the West Indies in the 1600s to make money, either by raiding the Spanish or by raising exotic crops like sugar, tobacco and cotton that fetched huge profits in Europe. And rum. Lots of rum.

That wealth, though, was generated by the labor of enslaved people. Danish slavery was just as brutal as any Caribbean plantation system. In fact, the islands were a huge market for the slave trade, with thousands of slaves being shipped there from West Africa, sold, and then transported all over the Caribbean and the wider Atlantic world.

Descendants of these enslaved African people make up the vast majority of the territory’s population today.

St. John has a particular place in the pantheon of resistance to slavery: Its enslaved people rebelled against their rulers in 1733 and threw them out. They were free for six months before the Danish could get enough help from their French friends to make a violent comeback.

The Danes did not come to settle in the West Indies, though. There’s a reason why English Creole is today the most common language in the US Virgin Islands. The Danes liked skimming off the profits, but the white settlers in their tropical colony were mostly English, Dutch and Scottish.

Among the latter was the family of US founding father, Alexander Hamilton. He lived on St. Croix for several years.

There were some people — white, black and Native American — living in and around the islands before the Danes took over. They're described in modern tourist brochures as pirates. Undoubtedly some were, like Edward Teach, better known as Blackbeard. But most of these people were “masterless men” — indentured servants who’d survived their terms of enforced labor, or runaway sailors, and runaway slaves.

They found refuge there because of the location. The Virgin Islands formed a kind of buffer between the empires of Spain on the one hand, and England and France on the other. When a European power tried to establish a colony on the islands, the Spanish, based in Puerto Rico, were close enough to expel them. That’s why the islands were settled so late compared with the other West Indian islands farther east.

Eventually, the British were able to secure the easternmost portion of the Virgin Islands, which they still hold. The Spanish eventually occupied the westernmost Virgin Islands.

What, you might be asking? Yes. We should note here technically there are three sets of Virgin Islands. The British, the US, and what are called the Spanish Virgin Islands of Vieques, Culebra and a bunch of smaller islands. The formerly Spanish-ruled ones are now integrated into the Commonwealth of Puerto Rico and are just as much American as the territory known as the US Virgin Islands.

The Spanish were the first Europeans on the scene in the Virgin Islands. Christopher Columbus himself discovered them in 1493 and named them for “St. Ursula and her 11,000 virgins,” probably because that was easier than identifying and naming each of the hundreds of small islands to be found in the chain.

Christopher Columbus and the Spanish were not entering a vacuum. The islands teemed with people. The Ciboney and Taino are the oldest known groups, and more recently Arawak and Carib peoples had immigrated by sea from their original homelands on the South American mainland.

They became victims of genocide.

After the Spanish conquest of Puerto Rico in the early 1500s, some Taino leaders found refuge in the Virgin Islands and began to rally their forces to resist the Spanish conquest. The Spanish responded to this military and political threat with massive violence. After that initial opening, the Spanish spent subsequent years raiding the islands for slaves to work in their mines and plantations.

When you consider these Native American populations were already being decimated by the arrival of previously unknown European pathogens, it’s not surprising that the Virgin Islands were considered “empty” by later European visitors. But the region’s Native Americans did not vanish. Their DNA can be found in many modern inhabitants. By hiding, fighting, resisting and adapting, they persisted.

So that’s the history of the Virgin Islands in a nutshell: genocide, resistance, piracy, slavery, slave revolts, emancipation, poverty and a massive real estate deal amid the paranoia of wartime. Oh, and rum. Lots of rum.