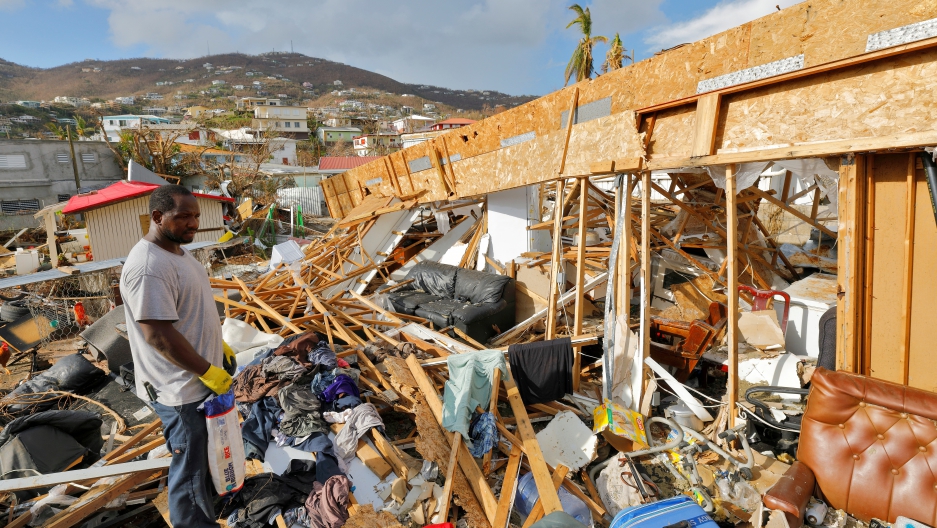 A resident of the Frenchtown district surveys his home 12 days after Hurricane Irma wrought havoc to the island, in Charlotte Amalie, St. Thomas, US Virgin Islands, Sept. 16, 2017.

The hurricanes that recently smashed islands in the Caribbean set records for size, strength and endurance — records that experts predict will be broken sooner rather than later, as global warming continues to heat the oceans and intensify precipitation cycles.

This situation makes global action on limiting climate change and preparing for its impacts, especially on Small Island Developing States, more urgent than ever, says Williams, who was also the former special adviser for the UN Sustainable Development Goals.

These islands have already begun responding to the threat of storms in “a more intelligent way,” Williams says, including improvements in agriculture and construction, but she believes the biggest help to these nations and territories are lifestyle changes in the industrial and developed countries “where the emissions of carbon really damage the seas and the environment and create this havoc.”

On the islands that are still colonies — St. Martin, St. Barts and the British Virgin Islands, for example — the metropolitan governments are more capable of responding to disasters because they have more resources and have a chance to persuade their parliaments to reconstruct in a manner that suits the islands, Williams says.

For independent countries, it's much harder, however. “You're looking at countries that have not fully recovered from the economic crisis of 2008 and from the repeated battering from hurricanes,” Williams says. “So, I would not be surprised if special measures have to be put in place about the existing debts and the reconstructing.”

The upcoming November climate meeting in Bonn will be chaired by George Konrote, the president of Fiji, one of the Small Island Developing States, Williams notes. Konrote has insisted that the issue of SIDS will be featured during his one-year tenure.

“I recall years ago when my country, Grenada, was leading the Small Island States, we were arguing that we will see in climate change, if we don't act in a decisive and urgent manner, a level of unpredictability and randomness that we could not necessarily control,” she says. “I'm sorry to say that we are proving that our arguments, or our clarion calls, were correct; that, in fact, we must act urgently, because the impacts are going to be hardest on us as small island states, but it is going to be widespread.”

“I think the floods from Houston to hurricanes in Florida suggest that it's not just the islands that will experience this level of climatical chaos, that it is spreading,” she concludes.