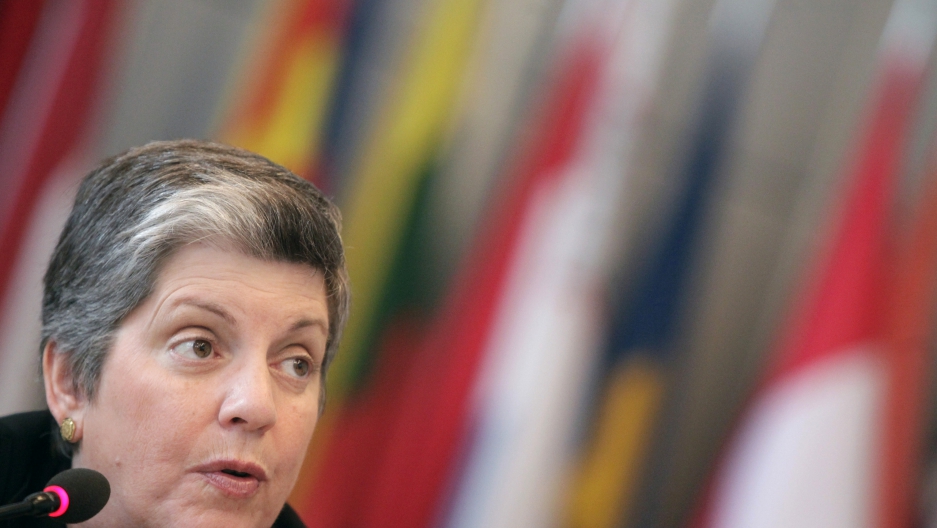 Janet Napolitano, the former US Secretary of Homeland Security, is suing the department she once led.

When Janet Napolitano was secretary of homeland security under Barack Obama, she created Deferred Action for Childhood Arrivals, a federal program that protects some young immigrants from deportation and gives them temporary work authorization.

Now, as president of the University of California system, she’s suing her old department in an effort to keep the program in place. The Trump administration announced last week that it will drawn down the program and that recipients will begin losing their status in March.

The University of California's 10-campus system has about 4,000 undocumented students, plus more who are teachers, researchers and healthcare providers. Lawyers for Napolitano and the UC system filed the federal lawsuit on Friday. The complaint accuses Trump officials of violating the Administrative Procedure Act and the constitutional due process rights of UC students and staff by abruptly ending the program. It was filed against the Department of Homeland Security and its acting secretary, Elaine Duke in the Northern District of California, and says Trump's action was "nothing more than unreasoned executive whim."

“Taking [DACA] away wholesale is not a valid exercise of executive authority,” Napolitano said. For instance, the complaint says that US Attorney General Jeff Sessions gave no reasonable explanation for ending the program and the Trump administartion failed to follow rules requiring a public notice and comment period.

In announcement on Sept. 5, Sessions said that the DACA program was an executive overreach by President Barack Obama that shows “disrespect for the legislative process.”

Napolitano said she hopes that Congress will pass a permanenent solution on immigration. But in the meantime, it’s important to push ahead with the lawsuit.

“It’s a belt-and-suspenders approach,” she said. “We’re seeking judicial relief but we’re also seeking Congressional action. Anything that can be done to save DACA and provide relief for its recipients is worth going for.”

Most universities’ public stances have been letters that reaffirm support of immigrants after major policy changes are announced. The University of California, however, is the first school to take legal action.

More: How can a ‘sanctuary school’ protect its DACA students?