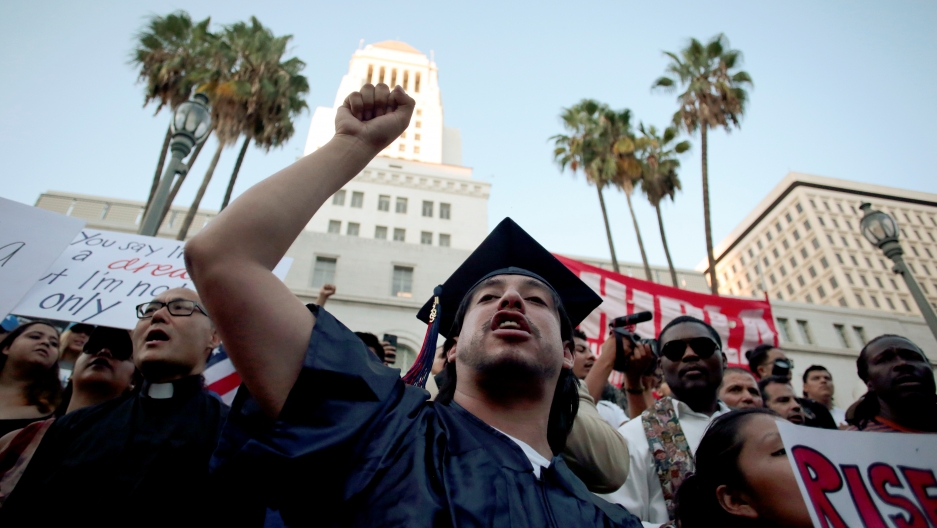 Roman Hernandez, a Deferred Action for Childhood Arrivals (DACA) program recipient, chants with supporters at City Hall in Los Angeles on Sept. 5, 2017. The Trump administration announced that morning that the program, which enabled many undocumented immigrants to seek higher education, will be phased out.

After the 2016 presidential election, Xavier Maciel felt compelled to act. He created a unique spreadsheet of universities that identify as sanctuary campuses, including his own Pomona College in Claremont, California. The goal? Provide a resource for undocumented students to learn about their schools’ stances on protecting them.

After the election of President Donald Trump, the Southern Poverty Law Center began reporting incidents of anti-immigrant violence. Immigration policies began to change, and Maciel says he knew the information would be necessary.

“There’s a lot more interest now to continue to push for sanctuary-like resources,” he says. “It can be a big deal for students.”

Maciel admits the database was mostly symbolic. It started when Pomona College teachers got together and drafted a petition to recognize the college as a safe haven. Soon, other colleges followed suit and an index of college sanctuaries was born. Now, there’s an added sense of urgency as nearly 800,000 people could lose the protections given under the Deferred Action for Childhood Arrivals, or DACA. The executive order allowed qualified undocumented immigrants who entered the country as minors to receive a renewable two-year period of deferral deportation and made them eligible for work permits.

Also: Weighing the risks of a 'sanctuary' campus

For Maciel, it’s personal. He’s part of a mixed-status family. Both Maciel and his younger sister are US citizens, while his parents remain undocumented. His older sister is a 24-year-old DACA recipient working toward her degree at Rutgers University. Now that DACA is set to end, Maciel says the family’s stress has compounded. 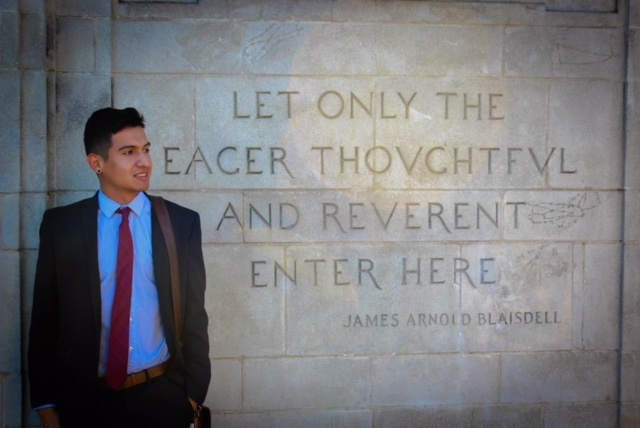 In 2016, while an undergraduate student at Pomona College in Claremont, California, Xavier Maciel created a database of universities nationwide that pledge sanctuary support for undocumented students. With DACA ending, he says, many of those schools are now looking to put their pledges into action.

“My sister had to take a semester off just to deal with previous immigration anxieties. But now she’s contemplating whether she should go back to school because she only has a year left to finish and anything can happen,” he says. “For DACA recipients, it’s now a rush to finish whatever step you’re at.”

For the thousands of college students who are DACA recipients, any goal of higher education could be at-risk. Kathleen Kim, a professor at Loyola Law School in Los Angeles, says even students’ ability to afford college could drastically change.

“Depending on their state, students who lose their DACA status are at risk of losing their tuition eligibility.” she says. “There are many schools that have proactively worked toward increasing scholarship funds for those and other undocumented students.”

In California, for instance, the state’s AB 540 law, also known as the California Dream Act, provides tuition services to make higher education more accessible for DACA and other undocumented students. Missouri, by contrast, previously allowed DACA recipients to qualify for in-state tuition while other undocumented students could not. A bill passed in 2015 made all undocumented immigrants ineligible for in-state tuition but the proposed Missouri Tuition Equity Act would once again allow DACA applicants the discounted rates.

“In some cases after someone’s DACA status expires, they become a full-on international student, subject to international fees,” Maciel says. “That can derail the educational outlook for these young people.”

To qualify for DACA protections, applicants had to provide highly personal details including their address, college enrollment information and an explanation for how they became undocumented. Kim says that can make the thousands of DACA recipients currently in school particularly vulnerable.

“The Department of Homeland Security now essentially has a database of DACA applicants and recipients,” she says. “That makes them highly visible targets for immigration enforcement and is a legitimate concern that universities, their students and advocates are looking at.”

In February, the DHS announced changes in immigration enforcement that prioritized all undocumented immigrants, ending a policy in the second half of President Barack Obama’s tenure that focused on criminals. Kim does not feel reassured by federal government, so far, that DACA recipients won’t be subject to removal once their statuses expire.

In a statement, Trump said he will continue the policy of prioritizing pursuing criminals for immigration enforcement. On Tuesday, DHS issued a fact sheet for DACA recipients, which said the information they provide to the government will not be proactively used for immigration enforcement unless there is a risk to national security, public safety or if the person has been summoned to appear before a judge. But they also caution that this policy could change “without notice.”

Maciel says now, more than ever, is the time for universities to step up as not only safe havens for DACA recipients and other undocumented students but as policy advocates. He is now working with organizations to train campus allies and counselors on the implications of DACA’s end. He’s also updating the sanctuary database to reflect school’s reactions to the Trump administration rescinding DACA.

What’s happening on your campus? Join the conversation in the Global Nation Exchange on Facebook.

So far, he says, most institutions’ public stances have been letters that reaffirm support of immigrants after major policy changes are announced. The University of California, however, is the first school to take legal action, announcing this week that they are suing the Trump administration for what it calls "wrongly and unconstitutionally violating the rights of the university and its students by rescinding the Deferred Action for Childhood Arrivals (DACA) program.” The lawsuit, filed against the Department of Homeland Security and its acting secretary, Elaine Duke in the Northern District of California, alleges the decision was "nothing more than unreasoned executive whim." Janet Napolitano, president of UC, is credited with creating the DACA program in 2012 during her tenure as secretary of the DHS. She says suing the federal government, especially the agency she led, is something neither she nor the university take lightly.

“It is imperative, however, that we stand up for these vital members of the UC community. They represent the best of who we are — hard working, resilient and motivated high achievers," she says. "To arbitrarily and capriciously end the DACA program, which benefits our country as a whole, is not only unlawful, it is contrary to our national values and bad policy.”

Even with more schools jumping on board and more school administrators are speaking out, Kim notes that when it comes to federal immigration enforcement, “sanctuary” isn’t a legal term and isn’t defined in the law.

“While a declaration can keep some state and local law enforcement from acting as immigration agents on their campus,” she says “federally, if authorities come to a university campus having identified an individual for removal, that university would not have legal basis to interfere, especially if that activity is supported by a warrant for arrest.”

Institutions do have rights, however. Universities are legally prevented from sharing personal information about their enrolled students unless the request is backed by a warrant. That includes requests from local, state and federal law enforcement agencies. Kim points out there are additional measures some schools are taking to better protect its undocumented population.

But some DACA recipients have already been detained and put into removal proceedings. Kim says, ultimately, “there’s no way a college or university can keep them safe from removal enforcement.”

“The only hope is that since DACA was intended to provide temporary relief, a permanent solution is on the horizon,” she says. Congress is now considering many bills related to DACA recipients.

Maciel says with just six months left before the first DACA recipients lose their status, there’s little time to wait. He’s researching every possible legal option for his family, even exploring whether he can become the legal guardian for his younger sister should the rest of his family be sent back to Mexico. While he’s hopeful that public outrage and support for DACA recipients like his older sister can spark change, he says there’s a hard reality immigrants must face.

“DACA is done. This whole idea of defending it or bringing it back isn’t the best strategy,” he says. “We need to be supporting the initiatives and legislation now that could permanently keep young people like my sister from having to live in the shadows again.”

One of the best ways universities can take the lead, he says, is to make resources for their DACA students to keep learning and feel safe.