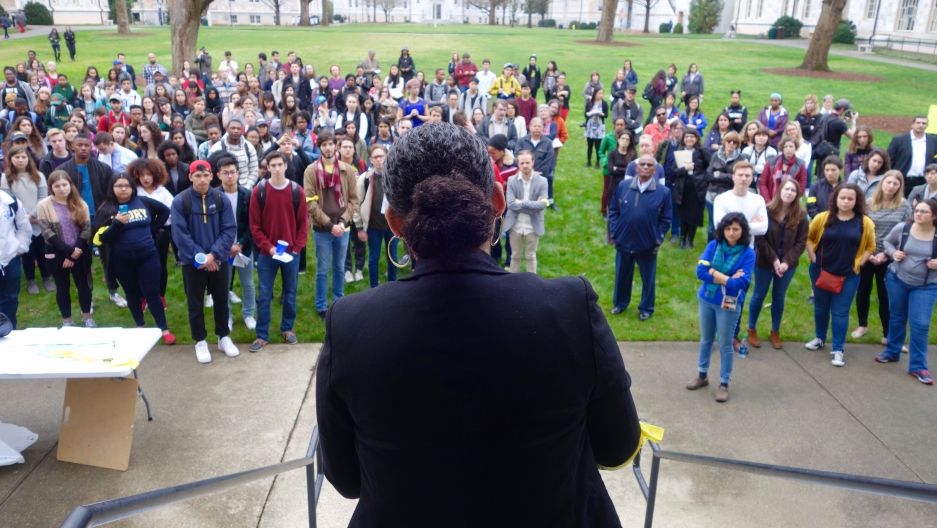 A professor speaks at a rally at Emory University in support of protecting undocumented students.

Earlier this month, around 200 students and faculty gathered at Emory University, meeting in the quad to demand one thing: sanctuary.

It's a call now heard at more than 100 universities across the United States. And it can mean different things at different campuses, from providing legal help for undocumented students to vowing to not allow immigration agents onto campus without a warrant.

At the Emory rally, faculty members stressed that the campus should be a safe space for undocumented students, including students like Ashley Rivas-Triana. She moved with her parents from Mexico to the US when she 2 years old. When she graduated from high school in 2012, she assumed she would go to college. Rivas-Triana quickly learned how difficult that would be.

Georgia has some of the harshest immigration laws in the country, including rules that bar undocumented students from attending the state’s top public universities and block them from receiving in-state tuition.

Now, as a freshman, she worries how President Donald Trump’s next four years will affect her four college years. “The national politics are definitely going to shape my time here,” Rivas-Triana says. “I can’t just be a normal college student. I can’t just go about my day pretending like what’s happening in the world doesn’t affect me.”

Rivas-Triana specifically fears that Trump will cancel a program called Deferred Action for Childhood Arrivals, known as DACA. The program, launched in 2012 by President Barack Obama's administration, temporarily protects undocumented immigrants from deportation if they came to the US as children. Trump threatens to cancel DACA. If he does, Rivas-Triana fears she will have to leave the US and go back to Mexico, a country she barely knows. It’s a worry shared by thousands of undocumented students.

What is a sanctuary campus?

“A sanctuary campus is a place where all students are free to live and learn without fear, but also to not worry about persecution either from other people at the university, in the state or from the government," says Emiko Soltis, executive director of Freedom University and an Emory alum helping lead the university's sanctuary movement. More specifically, at least at Emory, Soltis says that sanctuary means that the university should admit qualified undocumented students, offer them equal access to mental health and legal aid clinics, and pledge lawful non-cooperation with immigration authorities.

“Meaning that if [immigration authorities] are going to come to campus or interact with the students, they have to have a judicial warrant in order to do so," says Soltis.

It’s this last demand that has created a political battle between some universities and state officials.

Georgia Republican Earl Erhart recently introduced a bill to block state funding to universities that declare themselves "sanctuaries." For Emory, the net effect could be the loss of millions in state funding for scholarships and grants.

Those who support Erhart's bill include Christian Zimm, the president of Emory College Republicans. “It’s the law of the land,” Zimm says. “It's about time that we start taking undocumented immigrants very seriously," as in not letting them enroll at universities.

At the same time, Zimm says he understands why some students are worried.

“I feel their concerns, and they have every right to be concerned that way, but I would tell them, it probably won’t happen,” Zimm says.

Zimm says he does not believe that immigration agents will descend on campuses looking for undocumented immigrants. But uncertainty about that is sparking fear among some students, intensifying the fight for sanctuary, and forcing some university presidents to respond.

Claire Sterk, Emory’s president, wrote a public letter in January, following cautious lines seen at other universities. She said that DACA students should continue to apply to Emory, and that the university would follow existing privacy laws to protect their personal information. But, she said, she won’t stop the university from cooperating with immigration authorities. 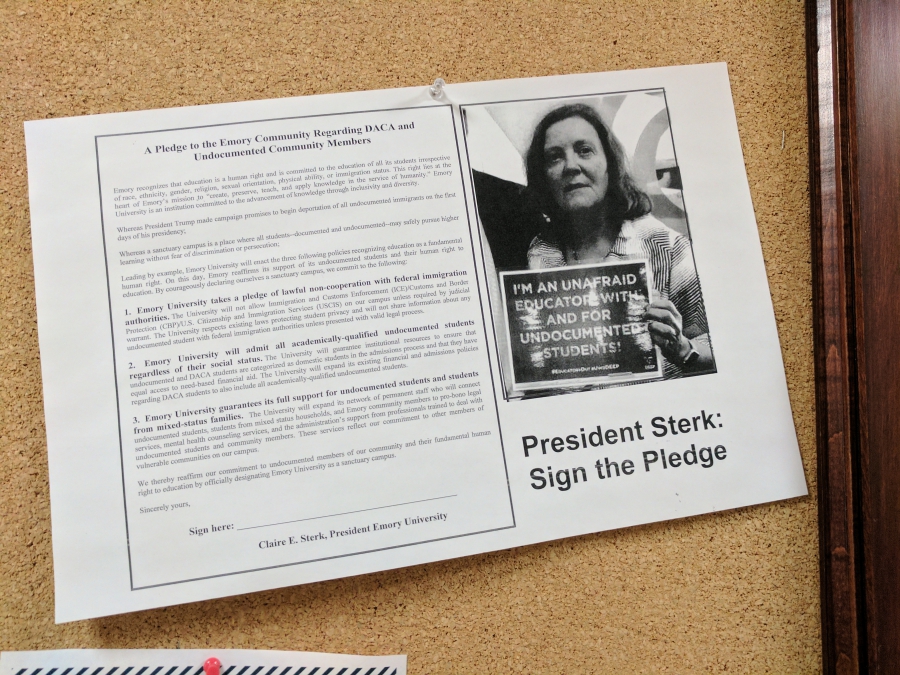 A letter to Emory University's president, Claire Sterk, in support of the sanctuary campus movement. Several professors at the university have taped the letter to their doors.

On campus, the debate is far from over. Professors like Christine Ristaino, who teaches Italian, feel torn. “It feels as though no matter what we choose, we cannot guarantee that things will be okay," Ristaino says. She also adds that she has spoken with undocumented students who fear this debate puts them in the spotlight. “It would be a wonderful thing to do, symbolically, it’s beautiful,” she says of the sanctuary movement. "But the reality is, will that make our students less safe?”

Rivas-Triana says that she has also heard from some students who are afraid. But, she says, she is fighting for a sanctuary campus, not just for herself but for undocumented students like her twin sister, to ensure that she will be able to go to any college in the future. “There needs to be someone that needs to be not afraid of the consequences, because ultimately this is the right and just thing to do ... to send a message to the entire country that this is what we stand for,” she says.