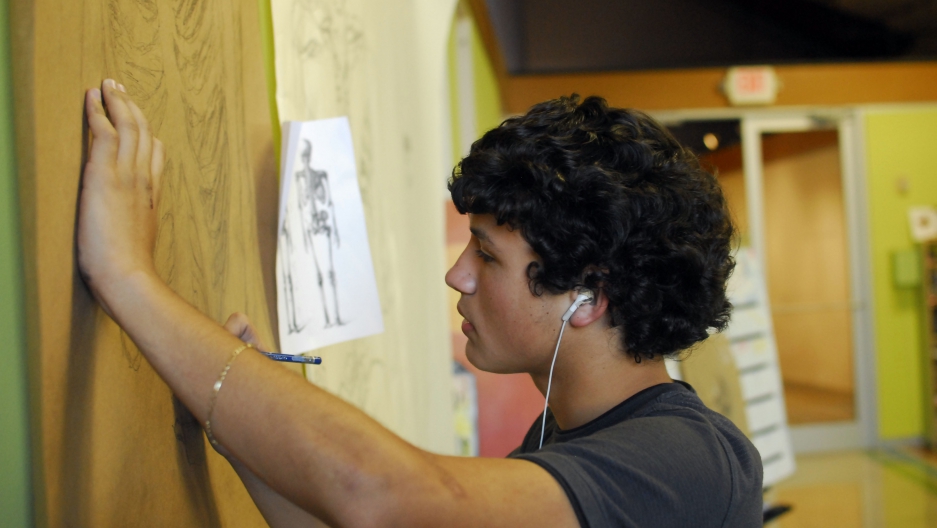 Josue Romero, a 19-year-old art student and an undocumented immigrant brought to the US as a child, was arrested on Wednesday in San Antonio. His advocates worried he'd be deported but he was released on Thursday night. This photo of Romero was provided by a local art organization which he is involved with.

Josue Romero, a 19-year-old student and an undocumented immigrant brought to the US as a child, was arrested on Wednesday and transferred to Immigration and Customs Enforcement custody Thursday morning. His advocates were worried that he would be deported to Honduras.

About 24 hours later, though, ICE released him.

According to Bexar Sheriff’s Office activity records, Romero was charged with possession of marijuana on Wednesday. ICE told PRI in a statement that they requested that Bexar County Jail placed a detainer on Romero and that he was later transferred in to ICE custody and then taken to a detention facility. They did not immediately respond to a request for information about why he was released.

Romero is a recipient of DACA, Deferred Action for Childhood Arrivals, an executive order issued by President Barack Obama in June, 2012, to give temporary relief from deportation and work authorization to some undocumented immigrants who were brought to the US as children. Over 860,000 people have been accepted to the program, according to government data (PDF).

President Donald Trump wavered in his policy toward DACA recipients in a press conference today. “DACA is a very, very difficult subject for me,” he said. He said will address the issue “with heart. ... It's one of the most difficult subjects I have because you have these incredible kids.”

Romero was brought to San Antonio from Honduras when he was 4 years old. He is currently a student at the Southwest School of Art.

Stephen Guzman is the communications manager at an arts program for students called SAY Sí. Guzman says Romero was a mentor to middle school students and community members. He says he was shocked when he heard that Romero had been detained.

“If there’s anybody that I know that deserves this less, it’s Josue,” says Guzman. “He’s a good member of the artistic community and San Antonio.”

Amy Fischer, policy director at RAICES, an organization that provides legal services to refugees and other immigrants, says their organization has spoken with Romero’s family. They have not, she says, been able to speak with Romero directly yet.

“As a DACA student he should not have been detained,” says Fischer. “He has legal status and there’s no reason he should have ever been in contact with ICE.”

Immigrants, with or without documents, can be detained or deported by ICE for committing certain crimes.

Fischer says they’re still trying to piece together the policies or program that put the local law enforcement agency in communication with ICE. In his executive order, Trump reinstated a program of local law enforcement cooperation with ICE called Secure Communities. The Obama administration abandoned that program in 2011; many law enforcement officials said it caused severe distrust between police and the communities they were trying to keep safe. The Bexar County Sheriff did not respond to a request for comment.

“What this shows is that the Trump administration does not care what’s illegal and legal,” says Fischer. “They chose to detain someone with legal status, and that’s not right and we’re ready to fight back.”

“Simply working with an attorney is no longer enough. Immigration defense these days looks like the job of an entire community and not a client and an individual,” she says.

On Thursday afternoon, Romero was transferred from the Bexar County Jail to an immigration detention center in Pearsall, Texas, about 60 miles southwest of San Antonio. By about 7 p.m., he was released

ICE says Romero was ordered to be removed from the US by an immigration judge on Dec. 3, 2004, but said “no further information will be provided.” Romero was a small child in 2004 and had to undergo background checks in order to gain DACA status.

Congressman Lloyd Doggett, who represents parts of San Antonio, had issued a statement calling for Romero’s release. “While its new policies may increasingly endanger millions of undocumented immigrants, the Trump administration has not yet revoked DACA. ICE must not revoke DACA on a case-by-case basis,” Doggett said, noting that Romero was arrested for carrying less than 2 ounces of marijuana. “The only threat to safety is what may well happen to him personally if he is deported to Honduras.”

In his press conference today, Trump did not say, though, that his administration would refrain from deporting DACA recipients.

"You know, I love these kids. I love kids. I have kids and grandkids. And I find it very, very hard doing what the law says exactly to do," he said. "And you know, the law is rough. I'm not talking about new laws. I'm talking the existing law is very rough. It's very, very rough."

Romero’s case is one of many in recent weeks that are cause for concern for some 11 million undocumented immigrants and their families. Immigration agents detained 680 people in raids across at least seven states last week, which Homeland Security Secretary John Kelly said was a routine part of operations to arrest criminals that have been going on for years. Federal officials this week also detained DACA recipient Daniel Ramirez in Washington state. On Feb. 10, they deported a Phoenix woman who appeared for a scheduled check-in with authorities, prompting a mother in Denver who had a similar scheduled check-in to seek sanctuary in a church.

For her part, Fischer is encouraging immigrants to know their rights — and to be in touch with attorneys and community members who can help in case they are detained.

Also: How this undocumented immigrant brought to the US as a child is getting ready for Trump's immigration agenda