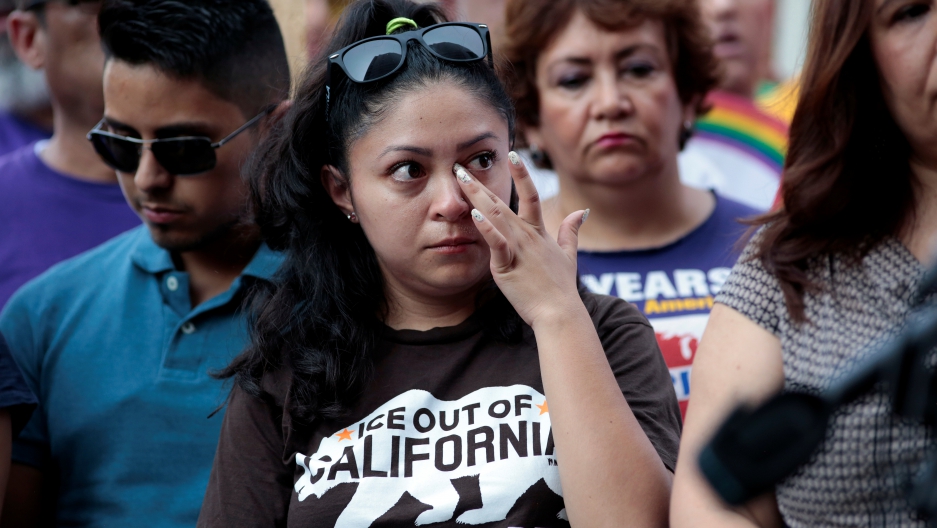 Diana, a Deferred Action for Childhood Arrivals (DACA) program recipient, wipes away a tear listening to the parent of a DACA recipient speak during a rally outside the Federal Building in Los Angeles, California on Sept. 1, 2017.

In her dreams, when the phone rings, it’s always her daughter.

Immigration agents have arrived at her house. Her daughter says. “Ya ves? Ya ves lo que pasa mamá?” she asks. “You see? You see what happens, Mom?”

Verónica says she has this dream often. Even after she wakes up, she still has this overwhelming sense of guilt. She says she hears her daughter’s voice, accusing her.

Verónica asked that we not use her full name, but she wanted to tell her story. She was born in Mexico and came to the US without papers about 20 years ago. At the time, she had three small children and had recently become a widow. She says that in Mexico, there’s very little support for women like her. So, she crossed the border with her kids and ultimately came to settle in Jackson Heights, New York.

Verónica’s daughters are self-proclaimed “Dreamers” who received some protection from deportation under DACA, Deferred Action For Childhood Arrivals. It’s the program President Donald Trump rescinded on Tuesday. DACA temporarily protects undocumented immigrants who were brought to the US as children. It also allows them to apply for driver’s licenses, work permits and, for some, pay in-state tuition rates to go to college. With this program, one of Verónica’s daughters was able to become an accountant; the other is studying to be a medical assistant. Her third daughter is in high school.

But lately, the family has been talking about leaving the US. Maybe going back to Mexico. Trump’s announcement could leave close to 800,000 people at risk of deportation over the next two years, including Verónica’s children.

Verónica is an undocumented mother, whose daughters have DACA status. On Sept. 7, 2016, she joined a small protest in Jackson Heights, New York, to show her support for legislation that would protect undocumented immigrants brought to the US as children. She asked not to show her face or use her full name because of her immigration status.

On Thursday, Verónica went to a march for DACA in Jackson Heights. As she walked among the protesters, she said she feels a lot of guilt.

“Did I do the right thing, or the wrong thing? I don’t know sometimes,” she says in Spanish. “I do know if we had stayed, my daughters would have been living in poverty.”

Her feelings were echoed among other parents at the protest.

“I do feel guilty,” cried one mother who came from a notoriously dangerous neighborhood in Mexico City. In the US, her son had managed to become a mechanical engineer and her daughter is almost a medical assistant. Now, they too talk about leaving the country.

“I feel guilty for having brought them," she says. “Without a visa, nothing. I just ran out.”

Many who want DACA to end say that these parents should feel guilty. The children who become undocumented immigrants aren’t the criminals. They are the victims of their parents’ sins.

Conrad Pogorzelski III is with the College Republicans at the University of North Carolina, in Charlotte. A few months ago he explained how he sees things.

“I think it’s interesting when people talk about the law-abiding immigrants who came here illegally. They are here illegally,” he said. “It’s not an easy thing to talk about. I understand that these people are coming here, most of the time for a better life. But you have to have rules in place. Because if you don’t, if you start drawing lines in the sand, they get erased.”

Join: We’re talking about how families will be affected by the end of DACA in the Global Nation Exchange on Facebook.

Many DACA recipients have a hard time with this argument.

“This is not about our parents’ ‘poor choices,’” writes Barbara Sostaita in an essay for Feministing. “It’s about a government that builds walls to keep people out, exploits the Global South to the point where people have no choice but to leave home, and creates immigration policies that make it impossible to adjust our legal status.”

“I recall the times I made my mother cry, blaming her for bringing me to a country that didn’t want me and refused to make room for my dreams. Instead of being angry with a government determined to keep me from thriving, I condemned her for bringing me here in the first place. ... I took it out on her and my dad. I regret those moments wholeheartedly.”

DACA recipients say that the program has made their lives more livable in this country since it began in 2012. But it has been a difficult calculation for families. The DREAM Act, introduced to provide a path to legal status back in 2013, didn’t include the so-called Dreamers’ undocumented parents.

The Obama administration pushed forward DAPA, Deferred Action for Parents of Americans and Lawful Permanent Residents. It would have given some undocumented parents of US citizens or legal permanent residents temporary protections from deportation. But DAPA was placed on a temporary halt by courts in 2016, a decision upheld by a divided and incomplete Supreme Court bench, near the end of the Obama term. Trump then rescinded the program when he took office.

The result was that families continued to be divided: Some of the family members were temporarily protected by DACA, but uncertain about the future. Some had citizenship or legal residency, while others were undocumented and lived under the radar of the government. That’s what happened to María’s family in Charlotte, North Carolina.

María and her husband are undocumented. Three of María’s children are US citizens, and her eldest daughter has DACA status. Talking over the phone, she says the situation in her North Carolina feels like it’s spun out of control. She was at work, cleaning a house, when she heard the news that Trump planned to dismantle DACA. She locked herself in a room and started to cry.

Her daughter, the one who has DACA, wants to get her PhD in fine arts. But lately, she’s been talking about moving to Canada or maybe going back to Mexico to keep studying. María knows that as an undocumented woman if her daughter leaves, it will be a very long time before they can see each other again. She cannot travel freely and cannot leave her other children.

“And I can’t wrap my head around this idea. Because she’s my daughter,” she says through tears.

María remembers the exact moment she decided to come to to the US. She says she was watching a group of school children play in her town in Guerrero, one of Mexico’s more embattled states. The school was dilapidated, and the kids ran around barefoot on the dirt floor. That’s when she knew she had to leave.