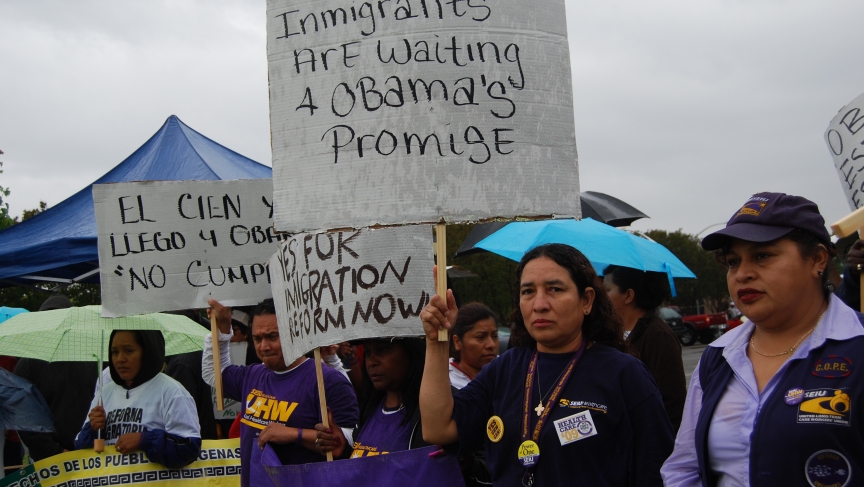 Unauthorized immigrants at a rally in Fresno, Calif., back in 2009 -- still waiting for Congress and President Obama to take action on an overhaul to immigration law.

The Senate passed its bill last summer. But House Republicans are pushing a piecemeal approach in the lower chamber. Some young, unauthorized immigrants could personally benefit from this strategy, but many are conflicted about whether that’s a good thing.

If there’s one thing many conservatives and liberals agree on when it comes to unauthorized immigrants, it’s that people like 18-year-old Susana shouldn’t be kicked out of the United States. She's been a good student, never had trouble with the law, and is now attending college in Denver.

Susana (who asked us not to use her last name) is one of perhaps 1.9 million so-called DREAMers in the US — young people brought here illegally as children.

After years of fighting for recognition, they won big last year when an executive order from President Barack Obama created a new program called DACA (Deferred Action for Childhood Arrivals) that protected some of them from deportation. They’re still not eligible to become citizens, though.

Yet that could change, if Congress takes on immigration reform bit by bit and passes the DREAM Act. But this path — instead of a sweeping immigration overhaul — risks leaving millions of other immigrants here without papers unable to legalize their status.

“What happens to our parents?” Susana asks. “They made the biggest sacrifice, and yeah, they broke the law. But ultimately, they did this for us.”

President Obama also recently said he'd support the piecemeal approach, provided that all the pieces eventually get done, which is a risky political proposition.

Susana says passing a DREAM Act without other reforms would be a “bittersweet victory.”

It leaves immigration reform activists with a tough dilemma: Do they take what they can get? Or push for an all-or-nothing approach?

“It’s a very tough tactical question, and it always has been,” says Edward Alden of the Council on Foreign Relations in Washington, DC.

“From a Republican perspective, it’s just a lot easier to do this piecemeal because then you can pick the pieces that are relatively well-supported within the Republican Party and leave aside the hard one, which is: Do you do some kind of legalization for the 10 to 11 million unauthorized immigrants living in the United States,” he says. “If that’s the issue that's left to last, it probably does not happen.”

To some US citizens, like Sujey Romero, that would be a tragedy. Romero was brought from Mexico to Houston in 1976, when she was seven weeks old, under the name Christina Rodríguez using the birth certificate of a child in Houston.

From that start in life, Romero now directs enrollment at the Cristo Rey Jesuit High School in Houston. The school caters to underprivileged Latinos, a population that once included Romero. She links her success in life to 1986, when Congress and President Ronald Reagan overhauled immigration laws and let entire families remain in the US.

Today, Romero has a master’s degree from Harvard. She drives a Volvo and lives in a Houston condo. She says she’s as American as you can get ... until talk turns to immigration.

“I have this almost like butterfly-in-my-tummy moment, when I feel like I have to say, ‘Before you say whatever you’re going to say, you need to know that I was undocumented, and that I’m lucky to be here [because of] the amnesty program in ‘86,'" she says. “And when I’ve uttered those words in social situations, because I live in Texas and because the climate here can sometimes be really anti-immigration reform, I’ve had the air sucked out of the room.”

That’s partly because the ‘86 amnesty is still controversial. The law was supposed to stop illegal immigration. Instead, the number of unauthorized immigrants soared from 5 million to 11 million today.

Opponents of immigration reform point to that fact. Proponents counter that stronger enforcement this time could prevent it from happening again.

And so, round and round the immigration debate goes.

Romero says she can’t imagine her American life if her parents weren’t able to come out of the shadows — along with her — in 1986. She worries about the parents out there today if the DREAM Act were passed.

“I think my anxiety is that people will think it’s enough. ... I think about the privilege I have, as a family, to be granted resident alien status and then later all of us becoming US citizens. And to not give families that, I think, makes me ... really sad for them,” she says.

Thanks to President Obama’s executive order, DREAMers are protected from deportation. So it’s easier for young, unauthorized immigrants today to support a tougher bargaining position like this. They can dig in their heels and fight harder for their parents to stay, too.