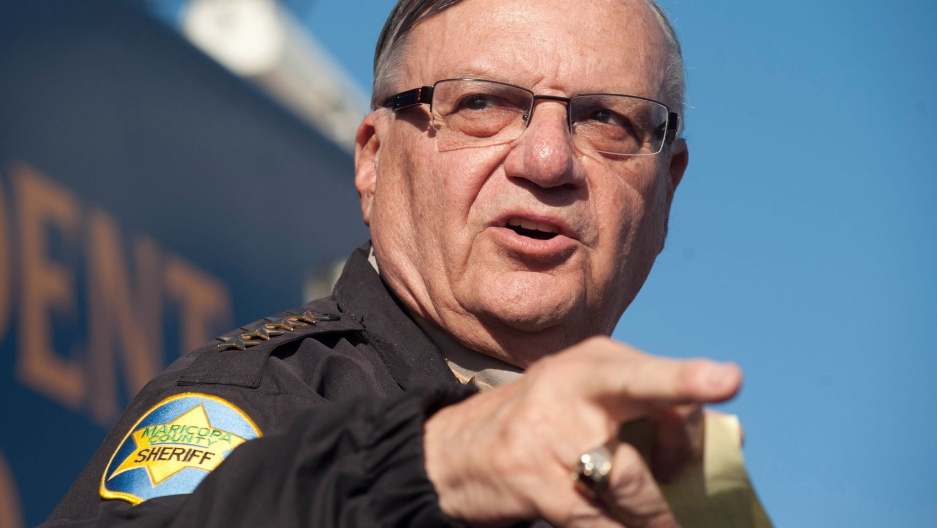 In his first act of presidential clemency, Trump pardoned the deeply divisive 85-year-old Arpaio, who ignored a federal court order that he stop detaining immigrants.

The move earned immediate scorn from Democrats and rights groups, who accused the Republican billionaire — still reeling from the fallout over his remarks on unrest in Charlottesville — of seeking to divide the country.

In a statement, the White House said Arpaio — who made detainees wear pink underwear and housed them in tented desert camps — had "more than fifty years of admirable service to our nation."

The former sheriff of Maricopa County, who reveled in his reputation as "America's toughest sheriff," had been due to be sentenced in October.

Trump had foreshadowed the announcement during a meandering speech in Arizona earlier this week, when he suggested Arpaio was convicted for "doing his job."

"You know what, I'll make a prediction: I think he's going to be just fine," Trump said.

"I won't do it tonight because I don't want to cause any controversy. But Sheriff Joe should feel good."

Trump has made appeals to the far right, refusing to condemn white supremacists while targeting migrants who came across the southern border.

"Throughout his time as sheriff, Arpaio continued his life's work of protecting the public from the scourges of crime and illegal immigration," the White House said in a statement.

"Sheriff Joe Arpaio is now 85 years old, and after more than 50 years of admirable service to our nation, he is a worthy candidate for a presidential pardon."

The announcement still came as a shock for many.

"Joe Arpaio is a bigot who targeted the Hispanic community for years. He should have served his time," said Democratic Congressman Joaquin Castro.

"With his pardon of Arpaio, Trump has chosen lawlessness over justice, division over unity, hurt over healing," said the ACLU's deputy legal director Cecillia Wang.

"Once again, the president has acted in support of illegal, failed immigration enforcement practices that target people of color and have been struck down by the courts. His pardon of Arpaio is a presidential endorsement of racism."

Also: 'Detained because my name was Gonzalez'

The US constitution offers the president almost unlimited pardon powers.

Conservative commentator Bill Kristol suggested the pardon "gets people used" to the idea of presidential pardons as the FBI investigation into the Trump campaign's alleged collusion with Russia deepens.

Recall #JoeArpaio not sentenced yet. Was voted out by Arizonans 2016, they chose a 21-yr. police officer who does respect law