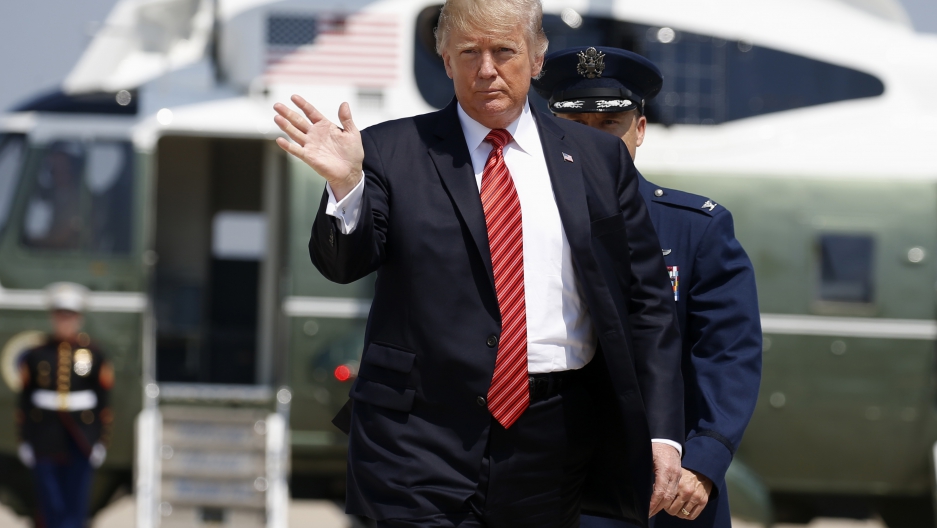 Trump departed Washington for the border town of Yuma, Arizona, where aides say he will tour a stretch of border fence before heading to Phoenix for a raucous campaign-style rally.

The event — which typically features a stem-winding Trump speech — will be the first of its kind since he sparked outrage by equivocating in his condemnation of a deadly neo-Nazi march in Virginia.

But the White House hopes this trip to Arizona can get the Trump train back on track.

His visit aims to tout the benefits of a border fence, turn up the heat on reluctant allies and demonstrate the president's determination to realize a central campaign pledge.

Speculation is building that Trump may use the Phoenix rally to formally endorse a challenger to incumbent moderate Republican Senator Jeff Flake or pardon Joe Arpaio, a former sheriff who was convicted of willfully violating a court order to stop targeting Hispanics in immigration roundups.

Either action would be a shot across the bow of skeptical Republicans and a message to far-right supporters.

Case for a wall

In Yuma, Trump will again make the case that a wall along the 3,200 kilometer (2,000 mile) desert-scarred frontier would stem the flow of migrants from the south.

Yuma "was once one of the least secure border areas in America is now one of the most secure areas because of these investments in border security," a senior administration official said ahead of Trump's trip.

Trump had insisted that Mexico will pay for the wall — estimated to cost about $22 billion.

Having failed in that bid, he has turned to equally reticent Republicans in Congress to get US funding.

With his plan running into political quicksand, Trump needs to generate public pressure on reluctant lawmakers to support him.

A failure would be another setback for a president who has seen his message overshadowed by controversy and his agenda thwarted by legislative missteps.

A string of aides have departed the White House during Trump's seven months in office, including his chief of staff, two communications directors, a chief strategist and a press secretary.

Meanwhile, Republicans have become more vocal in their condemnation and polls show that Trump's approval rating stands at 35 percent — a historical low level for a president in his first year in office.

The Trump campaign's own polling firm, Fabrizio Lee recently reported that his approval fell 12 points among Republicans between June and August alone.

Trump will try to show that despite the setbacks, his administration has detained more migrants who arrived to the United States illegally.

In the first six months of this year, according to administration figures, immigration officials have arrested 91,000 people in the country illegally or who have violated their immigration status.

That is an increase of 44 percent in the same period the year before.

"An individual who crosses the border illegally and gets past the border patrol should no longer feel secure that they're immune from future enforcement," a senior administration official said.