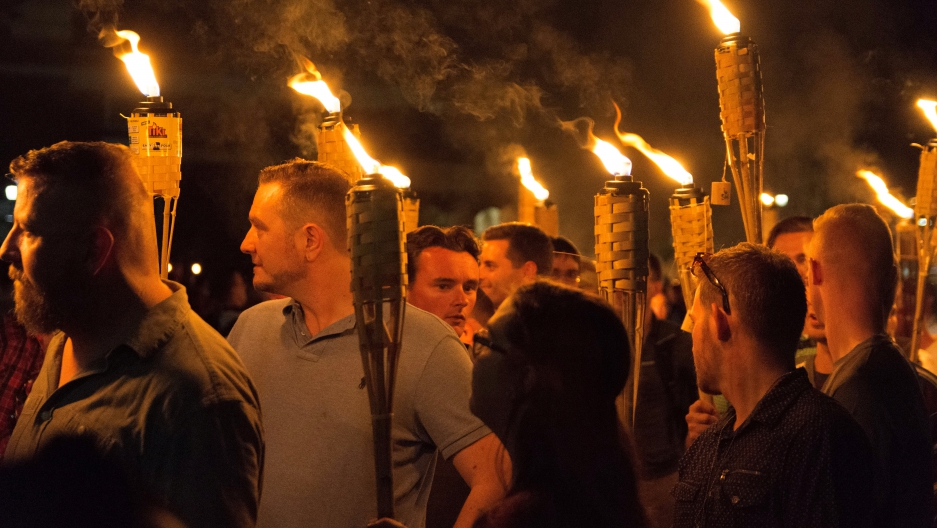 White nationalists carry torches on the grounds of the University of Virginia, on the eve of a planned Unite The Right rally in Charlottesville.

White supremacists and neo-Nazi groups enthusiastically embraced President Donald Trump Wednesday, seeing an endorsement of their cause in his insistence that left-wing groups were also to blame for the deadly violence at a "Unite the Right" rally in Charlottesville, Virginia.

"This man is doing absolutely everything in his power to back us up and we need to have his back," Andrew Anglin wrote on the DailyStormer, a neo-Nazi, anti-Semitic website that acts as a hub of the extreme right.

"It's going to be really, really hard to have any bad feelings towards Trump for a long, long time after this," he said.

Richard Spencer, the white nationalist organizer of the "Unite the Right" rally, hailed Trump's statement as "fair and down to earth."

"Trump cares about the truth," said Spencer, who added he was "proud of" the president.

Trump stunned many Americans Tuesday after he strongly condemned leftist agitators as equally responsible for the deadly violence at Saturday's rally in Charlottesville.

Hundreds of so-called alt-right activists descended on the city armed with clubs and bats and brandishing Nazi flags and symbols, to protest plans to take down a statue of Confederate general Robert E Lee.

Violent clashes erupted between white supremacists and anti-racism counter-protesters, and a young woman was killed when a suspected Nazi sympathizer rammed his car into a crowd of demonstrators.

Trump has come under fire from other political leaders, including several former presidents, for arguing that there was "blame on both sides" at the rally organized by white supremacists.

While Trump added general condemnations of Nazis and racists, groups aligned with the alt-right movement applauded his willingness to tag the left with blame.

"Thank you President Trump for your honesty & courage to tell the truth about #Charlottesville & condemn the leftist terrorists," he wrote.

Jack Posobiec, an alt-right figure whose comments Trump has retweeted, wrote "We [are] primetime now" and "Goodnight, Alt Left" as the president spoke to reporters from the Trump Tower in New York.

Many alt-right groups who took part in the rally have since been kicked off social media sites like Facebook and Instagram, and had their webpages shut down by hosts  enforcing policies against hate speech and threats.

But some still managed to communicate.

After being blocked by two mainstream hosting services, DailyStormer resurfaced temporarily Wednesday on a site using a ".ru" domain indicating a possible Russian host, before being shut down again.

Anglin applauded Trump's apparent sympathy for opponents of the removal of Lee's statue from a Charlottesville park.

Trump "uses our talking points — that George Washington and Thomas Jefferson are next after the Confederate monuments and that they're trying to destroy our history."

James Kirkpatrick, the head of  VDARE, an organization that seeks to restrict immigration to white Europeans, cheered Trump for focusing the blame for violence on the leftist "antifa" — short for anti-fascist — movement.

"President Donald Trump finally did what no-one in the Conservative Establishment would: calling out the Antifa for sparking violence at the legally-sanctioned demonstration in Charlottesville."