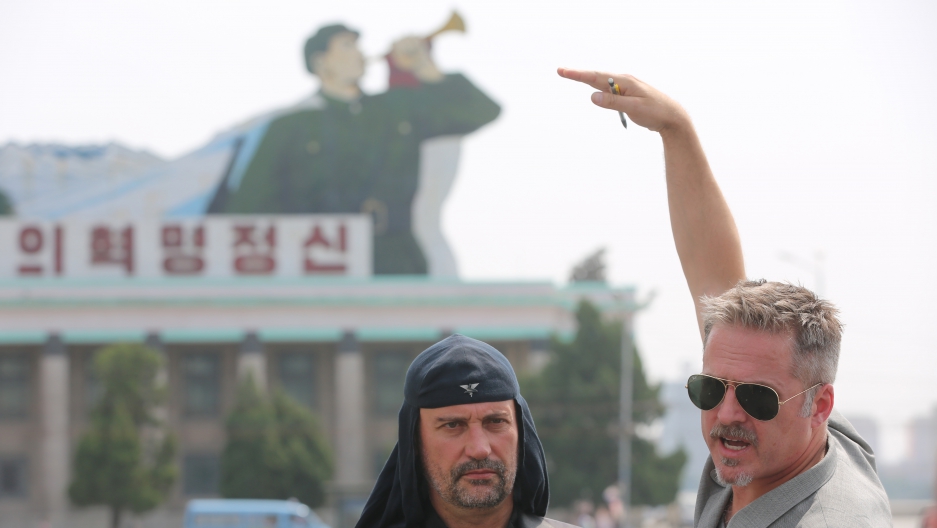 Director Morten Traavik, right, stands with the lead singer of Laibach, Milan Fras. Traavik brought the Slovenian band to Pyongyang in 2015 for a concert. And then he made a film about it.

From the very first minutes of the new documentary “Liberation Day,” Norwegian director Morten Traavik is out to challenge your assumptions about North Korea.

Scenes of screaming mobs at the height of Beatlemania. Rock stadium crowds waving in sync to Queen's Freddy Mercury. A young fan's hysterics at Michael Jackson's embrace. These images are interspliced with scenes of North Korean military marches and crowds behaving madly for their Dear Leader, currently Kim Jong-un.

Traavik is suggesting that we all, in our own way, bow before idols.

“The history of Western societies and North Korean society are very divergent, but the phonenom of worship, of mass worship, we do have that in our societies as well,” Traavik explains. “The difference between a society like North Korea and us is a difference of degree, not essence.”

That theory is put to the test when, against all odds, Traavik organizes and documents what's billed as North Korea's first ever rock concert, in 2015 — an event tied to Korea's Liberation Day celebration of independence from Japanese imperialism.

As a band from the former communist Yugoslavia, Laibach knows oppressive regimes; in fact, the band revels in it. Totalitarian and even fascist themes run through their stage performances and videos.

Whether it's a subversive joke is one of the mysteries about the band — a debate that follows Laibach to Pyongyang.

At one point early on in the documentary, a North Korean cultural ministry official named Mr. Ryi “welcomes” the band to Pyongyang, saying not only is Labaich considered a terrible rock group by Western critics, the North Korea government can't be sure the whole show isn't a provocation.

“Without trust, we cannot invite you here,” explains Mr. Ryi to the jet-lagged band members.

In other words: Sorry folks, show canceled. And that would seem to be the end of that.

But Traavik is a skilled negotiator. Laibach, he explains to his hosts, is like North Korea — hopelessly misunderstood in the West. It turns out to be a winning argument, even if North Korean censors comb through Laibach’s set list, ultimately axing half of the show.

Traavik clearly wants it all to work, perhaps too much. And, as the Korean Peninsula gears up for another Liberation Day on Aug. 15, there's a larger issue playing out behind the documentary: How the international community chooses to engage — or not engage — with North Korea.

It comes as the United Nations Security Council has just passed new, harsher sanctions against the already isolated regime.

“North Korea best not make any more threats to the United States,” Trump said Tuesday, according to The New York Times. “They will be met with fire and fury like the world has never seen.”

By contrast, Scandinavians, including Norwegians, have largely kept the diplomatic and cultural channels open. This has provided opportunities for artists like Traavik to collaborate with the North Koreans on mutliple occasions — developing a certain level of trust along the way.

The question is do these efforts tend to strengthen Kim's regime? Some certainly think so, and Traavik's work has generated controversy for that reason.

But Traavik argues these collaborations also expose North Koreans' deep curiosity about the wider world. Take, for example, a Traavik-released video where North Korean students cover the 1980s pop hit, “Take On Me.”

“Even the most monolithic society is made up by quite a large variety of people,” says Traavik, who questions the effectiveness of "one-way hectoring" by Western human rights groups.

“Personally I don't believe that is the way to achieve any kind of enlightenment. I'm much more interested in putting these two seemingly noncompatible ingredients in a shaker together ... and seeing what happens,” Traavik says.

So what happens? Well, by the time Laibach takes the stage, it's hard to know who's more changed by the experience.

Western audiences certainly learn a lot; for example, North Korea's fascination with “The Sound of Music,” which Laibach — ever the willing cover band — indulges.

Laibach played covers from The Sound of Music at its 2015 concert in Pyongyang.

What the North Koreans make of the whole thing is left open to interpretation. Traavik notes that, unlike the communist systems of the Soviet Union and Labaich's native Yugoslavia, North Korea has no known dissident movement to speak of.

Still, Traavik adds that Laibach's performance in Pyongyang was one few will soon forget.

“Maybe in 20 years, whether or not there will be a North Korean state, there will be some Laibach tribute band playing accordions or traditional Korean string instruments or some other weird fusion,” Traavik says. “But it will take time. Definitely.”

In North Korea's totalitarian state, one concert is, of course, just a pebble in the pond.

Whether the hills come alive to Labaich is anyone's guess. The message of “Liberation Day” lies elsewhere: The sound of music — even Laibach's — still sounds better than bombs.