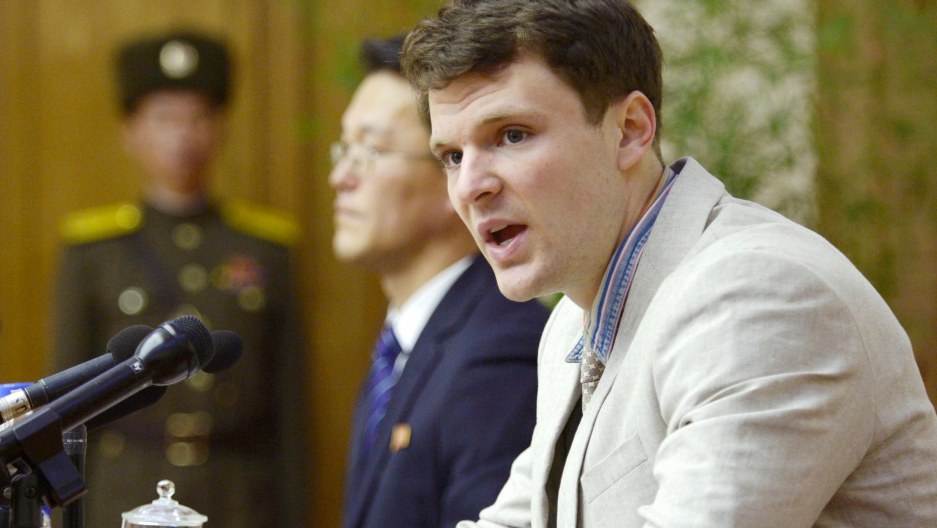 Otto Frederick Warmbier, a University of Virginia student, attends a news conference in Pyongyang, North Korea, in 2016. He died shortly after his release by North Korean authorities.

The latest edition of Politico Magazine asks the question: "Who Killed Otto Warmbier?" Warmbier was the American student who died shortly after being released from imprisonment by North Korea, where he'd fallen into a coma after serving 17 months of a 15 year prison sentence on allegations he tried to steal a propaganda poster during a December 2015 trip to the authoritarian nation.

Journalist Isaac Stone Fish uses the incident to describe the world of Western tourism in North Korea, in which carefree college students sometimes find themselves clashing with a closed and repressive state. An excerpt is below.

Despite Warmbier’s death, I believe North Korea remains a safe place for adventurous, but cautious American travelers. It’s unclear, however, if Warmbier’s tragic death was an aberration or the start of a new, more dangerous normal. Moreover, Young Pioneer Tours promotes a riskier vibe: “Budget travel to destinations your mother would rather you stayed away from.”

These are “binge drinking tours,” says Sung-Yoon Lee, a professor of Korean Studies at Tufts University. “That’s part of the lure of going to a place like North Korea: You can just go nuts. You can’t do drugs, or go to a brothel, so you get smashed.” While drinking is socially respectable in North Korea, that isn’t the right way to sell the country, the former CNN journalist Mike Chinoy told me. “People need to go with their eyes open, and play by North Korean rules,” said Chinoy, who has visited the country 17 times and is the author of "The Last P.O.W.," a book about Merrill Newman, one of the other Americans recently imprisoned in North Korea.

Others say it’s not fair to hold YPT responsible. “There has been an arrest now with almost every single Western tour agency,” said Chad O’Carrroll, who runs the site NK News. “It’s bad luck for Gareth now that people are connecting the dots with partying and drinking to the death, but if Merrill Newman or Matthew Miller [two other American tourists recently detained in North Korea] had died, there would also be outrage – but not that connection.” He added, North Korea is “to blame for this death, ultimately.”

(This story has been excerpted with permission from Politico Magazine. Read the entire article here.)